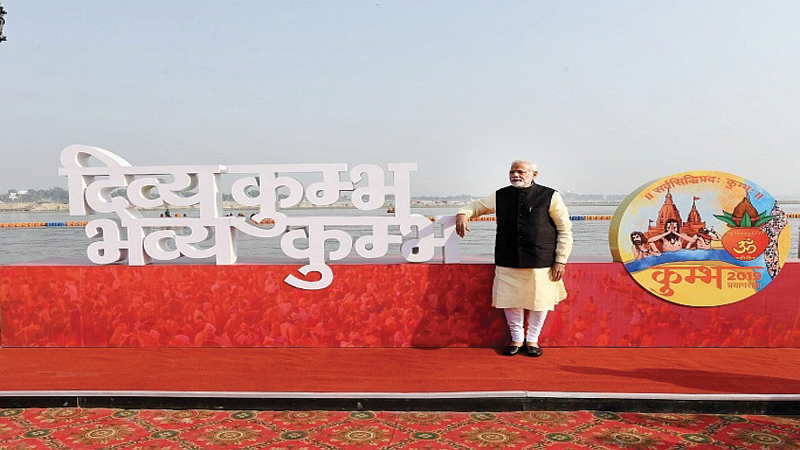 175 Km of sewerage network in Prayagraj will reduce 7.8 cr litres of sewage per day falling into Ganga

During the event, PM reiterated the commitment of the government towards clean Ganga and informed the public about various initiatives taken up under the Namami Gange program.

Shri Narendra Modi also laid the foundation stone for two projects in the trans Ganga/Yamuna area under One City-One Operator scheme with sanctioned cost of Rs. 767.59 Cr. The project is based on Hybrid Annuity based PPP mode that includes Operations and Maintenance of all the sewerage infrastructure for 15 years. These projects include I&D (Intersection and diversion) of sewage network, 7 sewage pumping stations and 3 STPs of total capacity 72 Million Litres per Day (MLD) (Naini-42 MLD, Phaphamau-14 MLD and Jhusi- 16 MLD).

With these projects, there will be comprehensive sewerage coverage of Prayagraj, including areas on the other side of the Ganga and Yamuna rivers.

Under Namami Gange Programme, 10 projects have been already sanctioned at an estimated cost of Rs. 2915.78 crore for creation of 779 Km sewerage network and construction of 8 STPs having total capacity of 191 MLD.

4 projects have been completed during 2016 leading to the creation of sewage treatment capacity of 119 MLD and a laying of 129 km of sewerage network.

2 Projects pertaining to Sewerage District A & B in Prayagraj are under advance stage of execution and are expected to be completed by March 2019. These projects will lead to creation of 456 Km of sewerage network and would feed to existing STPs at Naini and Numayadahi

Supporting the sanitation initiative of Government of UP during Kumbh Mela 2019, NMCG sanctioned a financial assistance of Rs. 113 crores for the construction of 27,500 toilets & 20,000 urinals. An additional Rs. 16.68 crore has been sanctioned for ‘Paint My City’ and other such activities. The ‘Paint My City’ campaign was appreciated by the PM as a commendable initiative to connect people with the city and make it clean and beautiful on the eve of the Kumbh. Rs. 3.6 crores has been allocated for 16,000 dustbins and lining bags. Bioremediation projects have been also sanctioned for 53 drains.

The Prime Minister, Shri Narendra Modi, on December 16 inaugurated a new Airport Complex, and an Integrated Command and Control Centre for the Kumbh Mela, at Prayagraj.

The Prime Minister also performed Ganga Pujan, and visited the Swachh Kumbh Exhibition. He visited the Akshay Vat in Prayagraj. He also dedicated to the nation, inaugurated, or laid the Foundation Stone for various development projects at Andawa in Prayagraj.

Addressing a large gathering, he announced that pilgrims for the Ardh-Kumbh this time will also be able to visit the Akshay Vat. He said the Government is making every effort to ensure good connectivity to Prayagraj. He said the projects dedicated today, would help both infrastructure and connectivity. He said the new airport terminal had been completed in a record time of one year.

The Prime Minister said that every effort is being made to ensure a unique experience for devotees coming for the Ardh-Kumbh. He said the effort is to showcase India’s glorious past, and vibrant future.

The Prime Minister said that the Government is also working to ensure a clean Ganga. He said the sewage treatment plants and beautification of Ghats would go a long way in this regard.

The Prime Minister described the Kumbh as a symbol of India and Indianness. He said it unites us, and gives a glimpse of Ek Bharat, Shrestha Bharat. He said that the organisation of the Kumbh is not just a matter of faith, but also a matter of prestige, and every visitor to the Kumbh should be well taken care of. He said the Ardh-Kumbh would show how ‘New India’ encompasses both heritage and modernity.

The Prime Minister said that he wishes to caution the country that certain forces are trying to put undue pressure on the judiciary. He said these elements consider themselves to be above all institutions.

The Inland Waterways Authority of India (IWAI) has been working hard towards facilitating safe passenger movements for Kumbh-Mela 2019.

Kumbh-Mela is scheduled to be held at Sangam, Prayagraj (Allahabad) from 15.01.2019 to 15.03.2019. IWAI has set up four floating terminals, one each at, Kilaghat, Sarasvati Ghat, Naini Bridge and Sujawan Ghat. Further, two vessels namely C.L. Kasturba and S.L.Kamla will be deployed for pilgrim movement.

Fairway with navigational aids will be maintained between Prayagraj (Allahabad) and Varanasi with targeted least available depth (LAD) of 1.0 m. Five temporary jetties at Chatnag, Sirsa, Sitamarhi, Vindhyachal and Chunar have also been setup for embarkment and dis-embarkment of passengers.

IWAI has the mandate to provide safe and efficient mode of transport through Inland navigation.

As a part of development of NW-1 (Allahabad to Haldia) IWAI is making substantial interventions to make navigable the Allahabad -Varanasi stretch of River Ganga. In this regard, IWAI is working on providing a sufficient draft of 1.0 m for the entire channel in river Ganga between Allahabad and Varanasi. This will ensure seamless and safe movement of vessels.