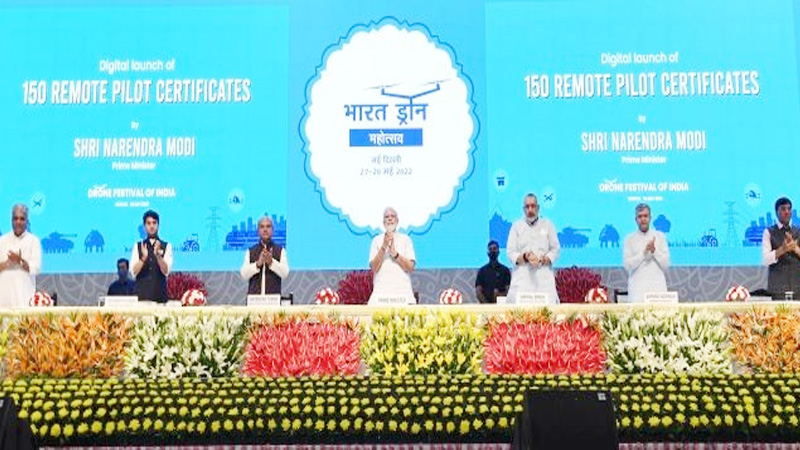 Addressing the gathering, the Prime Minister conveyed his fascination and interest in the drone sector and said that he was deeply impressed by the drone exhibition and the spirit of the entrepreneurs and innovation in the sector. The Prime Minister also talked about his interaction with farmers and young engineers. He said that the energy and enthusiasm in the drone sector are visible and indicate India’s strength and desire to leapfrog into a leading position. “The sector shows great possibilities of a major sector for employment generation”, he said.

The Prime Minister cited PM Swamitva Yojana as an example of how drone technology is becoming the basis of a major revolution. Under this scheme, for the first time, every property in the villages of the country is being digitally mapped and digital property cards are being given to the people. “Promotion of drone technology is another medium of advancing our commitment to good governance and ease of living. In the form of drones, we have got a smart tool that is going to be part and parcel of common people’s lives”, he said.

The Prime Minister highlighted the importance of drone technology in the fields of defence, disaster management, agriculture, tourism, film and entertainment. He said that the use of this technology is bound to increase in the coming days. The Prime Minister also narrated the use of drones in his official decision making through examples of PRAGATI reviews and Kedarnath projects.

The Prime Minister said that drone technology is going to play a major role in empowering farmers and modernize their lives. As villages are witnessing the arrival of roads, electricity, optical fibre and digital technology. Still, agriculture work is being conducted in old ways, leading to hassles, low productivity and wastage. He also talked about continued dependence on the revenue department with regard to activities ranging from land records to flood and drought relief. The drone has emerged as an effective tool to tackle all these issues, he said. The Prime Minister also said that measures taken to help agriculture sectors have ensured that technology is no longer intimidating for the farmers.