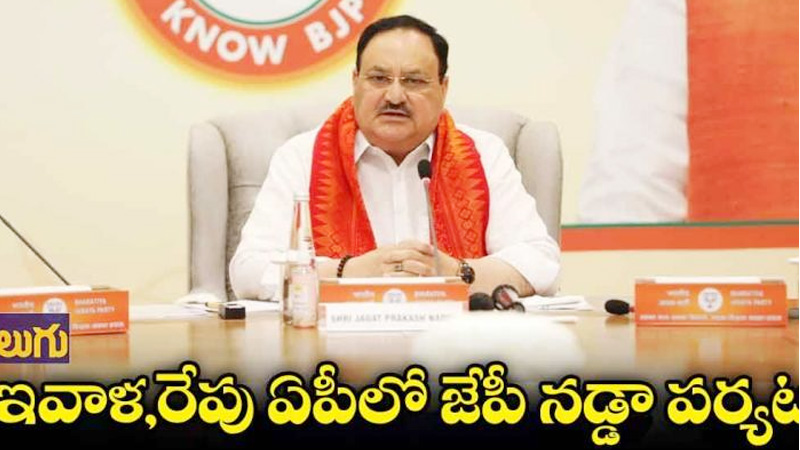 Bharatiya Janata Party National President Shri Jagat Prakash Nadda arrived in Vijayawada on 07 June 2022 in a two-day Pravas to Andhra Pradesh. Andhra Pradesh BJP leaders along with thousand of Party Karyakartas gave a warm welcome to Shri Nadda on his arrival at the airport in Vijayawada.

While addressing a massive Shaktikendra Pramukhs & Karyakarta Meeting at Vijayawada Shri JP Nadda said if we recall the last 70 years of history of our country, we will find that power situation was pathetic, our villages had no proper education and healthcare facilities, there was no proper connectivity, poor had no medical insurance coverage, governments were mired in corruption and nepotism, there was no focus on growth and development. Corruption had become way of life and people used to think nothing was possible.

ESTABLISHED THE POLITICS OF DEVELOPMENT

The BJP National President said since Prime Minister Shri Narendra Modi formed government in 2014 India has seen the journey of transformation and today people of the country has so much trust and faith on Modi ji that they say ‘Modi Hai To Mumkin Hai’. The PM has changed the political culture of the country. Under his leadership people have shunned politics of casteism, communalism, appeasement, dynasty and nepotism. Modi ji has established the politics of development, growth, progress and prosperity. He has empowered all sections of our society — villagers and farmers, poor and weaker sections, backward classes and Dalits, women and youth, workers and labourers.

The PM has challenged terrorism by adopting zero tolerance policy against terrorism. He has resolved old and perennial problems which include Ram Temple dispute, scrapping of Article 370, Tripple Talaq for Muslim women among others, he said.

Earlier programmes and policies used to be formulated on papers and used to remain on papers. But in the Narendra Modi Government projects are sanctioned and implemented strictly in time bound manner.

Highlighting the achievements of Modi government, Shri Nadda said when Modi ji took over the charge at the Centre there were only 65-70 start-up, but today India has over 70,000 start-ups. Out of these over 100 have already become Unicorns. India today is the Start-up Capital of the world. In Exports also we have created record by clocking $ 418 billion which is a record since our Independence.

Under the dynamic leadership of Prime Minister Shri Narendra Modi in the last eight years we have been able to bring 12 per cent people out of the poverty line. Today just less than 10 per cent of Indians are living below poverty line. Despite the Corona pandemic our extreme poverty level has been below 0.8 per cent. This is the real face of changing India. India developed two Made In India vaccines leaving everyone across the world surprised. India also created record by carrying out the world’s largest and fastest vaccination programme.

Shri Nadda said the Jagan Mohan Reddy government is doing politics of vendetta and has totally ignored the people of the state. The Reddy government is trying to oppress the Opposition parties, particularly the Bharatiya Janata Party. But I want to tell Jagan Mohan Reddy that no one can stop the ‘lotus’ to bloom in the state. The Bharatiya Janata Party will emerge victorious and the ‘lotus’ will bloom in Andhra Pradesh.

The BJP President said the Reddy government in Andhra Pradesh has failed miserably on all fronts — governance, law and order, employment generation, development, social welfare. It is deeply engaged in appeasement, corruption, nepotism and mafia raj. Industrial and economic development has collapsed. The state is buried under the debt of Rs 8 lakh crores and it is the people of the state who are suffering.