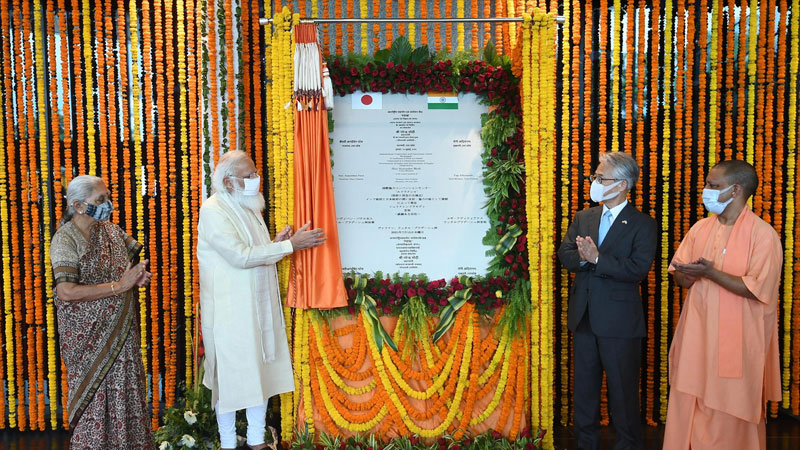 The Prime Minister, Shri Narendra Modi on July 15 inaugurated and laid the foundation stone of various development projects in Varanasi. He inaugurated various public projects and works, including a 100 bed MCH wing in BHU, multi-level parking at Godauliya, Ro-Ro Vessels for tourism development on River Ganga and three lane flyover bridge on the Varanasi Ghazipur Highway. Projects worth around Rs. 744 crores.

He also laid the foundation stones of several projects and public works worth around Rs. 839 crores. These include the Centre for Skill and Technical Support of Central Institute of Petrochemical Engineering and Technology (CIPET), 143 rural projects under Jal Jeevan Mission and mango and vegetable integrated pack house in Karkhiyaon.

Addressing the gathering, the Prime Minister recalled the difficult last few months when the mutated coronavirus attacked with full force. The Prime Minister lauded the efforts of Uttar Pradesh and Kashi in dealing with the challenge. He praised the efforts of the Government of Uttar Pradesh in dealing with the pandemic. He praised his team from Kashi, the administration and the entire team of Corona warriors for the way they mobilized day and night to create arrangements in Kashi. “Even in the difficult days, Kashi has shown that it never stops and never tires”, said the Prime Minister.He contrasted the unprecedented handling of the second wave with the earlier instances when Japanese encephalitis type of diseases used to wreak havoc. Even the small challenges used to acquire massive proportions in the absence of medical facilities and political will. Today, UP is the state with the highest number of tests and vaccinations, he said.

Shri Modi enumerated the rapidly improving medical infrastructure in Uttar Pradesh. Number of medical colleges in the last four years has grown four-fold. Many medical colleges are in various states of completion. Shri Modi talked of about 550 oxygen plants that are being established in the state out of which 14 were inaugurated today.He also praised the efforts to improve pediatric ICUs and oxygen facilities by the state government. He said that the recently announced Rs 23000 crore package will help Uttar Pradesh. He said that Kashi city is becoming a big medical hub of Purvanchal. He added that the treatment for some diseases for which one had to go to Delhi and Mumbai is now available in Kashi. Some projects that were inaugurated today will further augment the medical infrastructure of the city.

The Prime Minister said that Many projects are propelling the ancient city of Kashi on the path of development while keeping its essence safe. He said projects like highways, flyovers, railway overbridges, underground wiring, solving the problems of sewer and drinking water, promoting tourism have seen unprecedented push from the government. “Even currently, work is on for schemes worth 8000 crore” The Prime Minister informed.

He said that cleanliness and beauty of Ganga and Kashi is the aspiration and priority. For this, work is being done on every front like roads, sewage treatment, beautification of parks and ghats.Broadening of Panchkosi Marg, Bridge on Varanasi Ghazipur will help many villages and adjoining cities.

The Prime Minister said Large LED screens installed all over the city and latest technology information boards on the ghats will be of great help to the visitors to Kashi. These LED screens and information boards will present the history, architecture, crafts, art, every such information of Kashi in an attractive way and will be of great use to the devotees. The broadcast of the aarti at the Ghat of Maa Ganga and at Kashi Vishwanath temple will be possible in the entire city through big screens. The Prime Minister also informed that Ro-Ro service and cruise service that were inaugurated today will boost tourism and Rudraksh center that is being inaugurated today will provide a world class platform to the artists of the city.

The Prime Minister also talked about the development of Kashi as a centre of learning in modern times. Today Kashi also got model school, ITI and many such institutions. CIPET’s Centre for Skilling & Technical Support will help the area in industrial development. The Prime Minister said Uttar Pradesh is fast emerging as the leading investment destination of the country. He added that UP which was considered difficult to do business in till a few years ago is becoming a favorite place for Make in India today. The Prime Minister credited the Yogi government for this as the focus on infrastructure development has been relentless in recent times. Shri Modi listed Defence Corridor, Purvanchal Expressway, Bundelkhand Expressway, Gorakhpur Link Expressway and Ganga Expressway as some examples of the recent push.

The Prime Minister said today there is rule of law in UP. The mafia raj and terrorism, which were once going out of control, are now under the grip of law. The way parents always lived in fear and apprehensions regarding the safety of sisters and daughters, that situation has also changed. Today, the government in UP is run by development not on corruption and nepotism. That is why, today in UP, the people are getting the benefits of the schemes directly. That is why, today new industries are investing in UP and employment opportunities are increasing, said the Prime Minister.

The Prime Minister concluded by reminding the people of Uttar Pradesh about their responsibility of not allowing Corona to gain strength once again. He cautioned that despite slowing down, any carelessness can invite a massive wave. He called upon everyone to strictly follow the protocol and get vaccinated under “Vaccine for all-Free for All” Campaign.