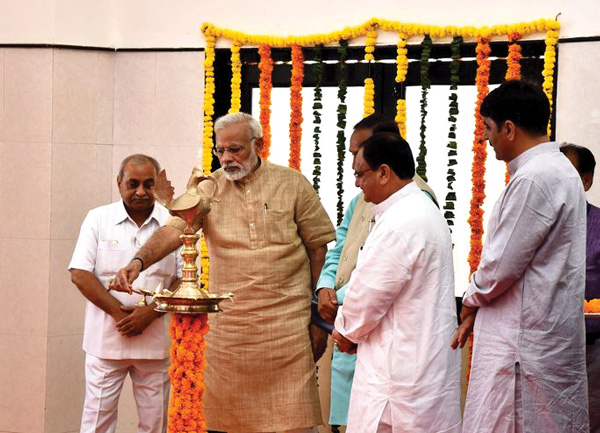 The Prime Minister, Shri Narendra Modi on October 8 visited his home town, Vadnagar, for the first time since assuming office of Prime Minister. Residents of the town thronged the streets to welcome the Prime Minister. He offered prayers at the Hatkeshwar Temple. He also stopped briefly at the school in which he had studied as a child.

The Prime Minister visited GMERS Medical College, Vadnagar, and unveiled a plaque to mark its dedication. He also interacted briefly with students.

At a public meeting, the Prime Minister launched the Intensified Mission Indradhanush, to accelerate progress towards the goal of full immunization coverage. It will provide greater focus on urban areas and other pockets of low immunization coverage. The Prime Minister distributed e-tablets to health workers to mark the launch of ImTeCHO – an innovative mobile phone application to improve performance of ASHAs. He also launched some development works.

I go back with your blessings and assure you that I will work even harder for the nation, the Prime Minister said to the people of Vadnagar.

The Prime Minister expressed happiness that he had got to inaugurate projects related to the health sector, particularly Intensified Mission Indradhanush. He mentioned how the Government had brought down the prices of stents, and said that the Government is working constantly to make healthcare affordable for the poor.

Mentioning his interaction with students from the medical college, the Prime Minister said that as a society, we require more doctors who can serve the people.