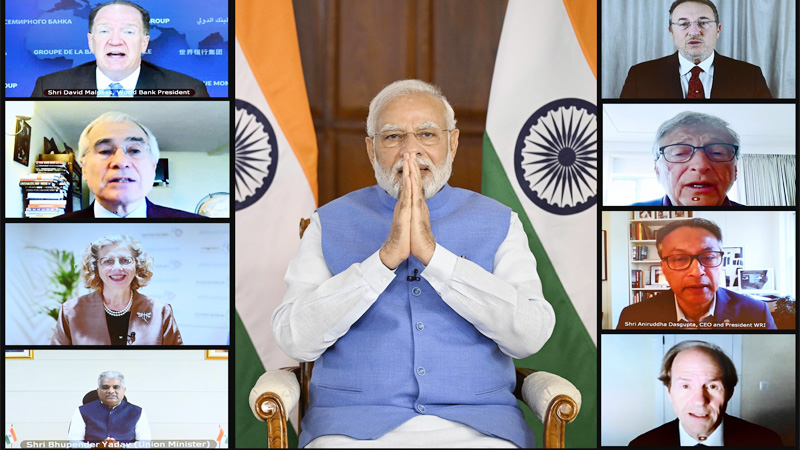 Prime Minister Shri Narendra Modi on 5 June launched a global initiative ‘Lifestyle for the Environment – LiFE Movement’ via video conference. The launch will initiate ‘LiFE Global Call for Papers’ inviting ideas and suggestions from academics, universities & research institutions etc to influence and persuade individuals, communities and organisations across the world to adopt an environment-conscious lifestyle.

Addressing the gathering, the Prime Minister said that today is an apt day for the launch of the global initiative ‘Lifestyle for the Environment – LiFE Movement’. He said we begin the LiFE – Lifestyle For Environment Movement. He stressed the need of the hour to solve the challenge faced by our planet using human-centric, collective efforts and robust action that further sustainable development.

The Prime Minister reminded the gathering that this global initiative was proposed by him at COP26 last year. He added that the vision of LiFE is to live a lifestyle that is in tune with our planet and does not harm it. And those who live such a lifestyle are called “Pro-Planet People”.

The Prime Minister said that thanks to 1.3 billion Indians in the country he was able to do many good things for the environment in our country. He added that India’s forest cover is increasing and so is the population of lions, tigers, leopards, elephants and rhinos. He said that India’s commitment to reach 40% of installed electric capacity from non-fossil fuel-based sources has been achieved, 9 years ahead of schedule. The target of 10% ethanol blending in petrol has been achieved 5 months ahead of the November 2022 target. This is a major accomplishment given that blending was hardly 1.5% in 2013-14 and 5% in 2019-20.

The Prime Minister urged the gathering to follow the principle of reuse, reduce and recycle. Our planet is one but our efforts have to be many – One earth, many efforts. “India stands ready to support any effort for a better environment and to further global wellness. Our track record speaks for itself”.

Mr Bill Gates, Co-Chairman of the Bill & Melinda Gates Foundation said that he was inspired by India’s leadership and efforts to curb rising emissions. Mr Gates said “I congratulate Prime Minister Modi for taking a lead on this global initiative of citizen action to promote pro-climate behaviours. Together we can build a green industrial revolution”.

Prof. Cass Sunstein, author of Nudge Theory said that India and the Prime Minister have been the world leaders with respect to environmental protection and climate change and human behaviour and ‘many of us are looking at India for inspiration and ideas.

Ms Inger Andersen, UNEP Global Head also spoke on the occasion and welcomed the launch of LiFE by the Prime Minister.

Lord Nicholas Stern, Climate Economist recalled Prime MInister’s landmark speech at CoP 26 at Glasgow to set out an inspiring vision of a new path of development.