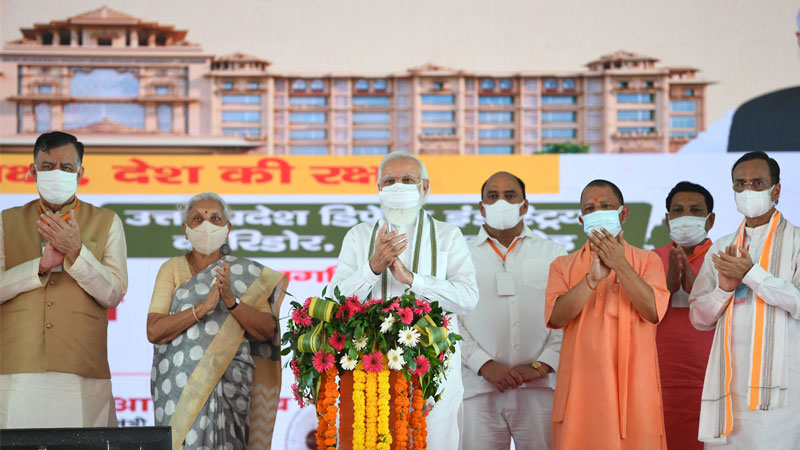 Paying rich tribute to Raja Mahendra Pratap Singh ji said, the life of Raja Mahendra Pratap Singh ji, teaches us the indomitable will and a willingness to go to any extent to fulfill our dreams. He added that Raja Mahendra Pratap Singh ji wanted the independence of India and he devoted every moment of his life to this. Today, when India is moving on the path of education and skill development at the time of Azadi ka Amrit Mahotsav, the establishment of the University in the name of this worthy son of Ma Bharati is the real ‘karyanjali’ to him, said the Prime Minister. The Prime Minister stressed that the university will not become only a big centre of higher education but will also emerge as a centre of modern defence studies, defence manufacturing-related technology and manpower development. The new National Education Policy’s features of skills and education in the local language will benefit this university a great deal.

The Prime Minister said, today not only the country, but the whole world is witnessing India manufacturing defence equipment from modern grenades and rifles to fighter aircraft, drones and warships. He added, India is moving out of the image of a big defence importer of the world and moving towards making a new identity of an important defence exporter of the world. Uttar Pradesh is becoming a huge centre of this transformation and the Prime Minister took pride in this as he is himself an MP from Uttar Pradesh. He informed that one and half dozen defence manufacturing companies will create thousands of jobs with hundreds of crores of rupees investment.

New industries are coming up to support the manufacture of small arms, armaments, drones and aerospace-related products in the Aligarh Node of the Defence Corridor. This will give new identities to Aligarh and nearby areas. The Prime Minister pointed out that Aligarh, which was famous for protecting the houses and shops with its famous padlocks, will now also be famous for creating products that will protect the boundaries of the nation. This will create new opportunities for the youth and MSME, he said.

Shri Modi stressed that today, Uttar Pradesh is emerging as a very attractive place for every small and big investor of the country and the world. This happens, Shri Modi said, when the necessary environment for investment is created, the necessary facilities are made available. Today, Uttar Pradesh is becoming a great example of the double engine government’s double benefit.

The Prime Minister expressed happiness to see the same UP which was seen as a stumbling block in the development of the country, is leading the big campaigns of the country today.

The Prime Minister dwelled on the situation of Uttar Pradesh before 2017. He said the people of UP cannot forget the kind of scams that used to happen and how the governance was handed over to the corrupt. Yogi ji’s government is sincerely engaged in the development of UP. There was a time when the administration here was run by goons and mafia arbitrarily. But now the extortionists and those running the mafia raj are behind bars, the Prime Minister said.

Shri Modi highlighted the efforts of the UP Government in ensuring the security of the most vulnerable sections during the pandemic and praised the way foodgrain was made available to the vulnerable and poor sections during the pandemic. The Prime Minister said it is the constant effort of the central government to give strength to the farmers with small landholdings. Many initiatives like increasing MSP by 1.5 times, expansion of Kisan Credit Card, improvement in the insurance scheme, provision of pension of Rs 3 thousand are empowering small farmers. The Prime Minister also informed that payment of more than 1 lakh 40 thousand crore rupees has been made to the sugarcane farmers of the state. He said that the sugarcane farmers of western UP will reap benefits from increasing ethanol content in petrol.
Uttar Pradesh Governor Smt. Anandiben Patel and Chief Minister Yogi Adityanath were also present at the event.