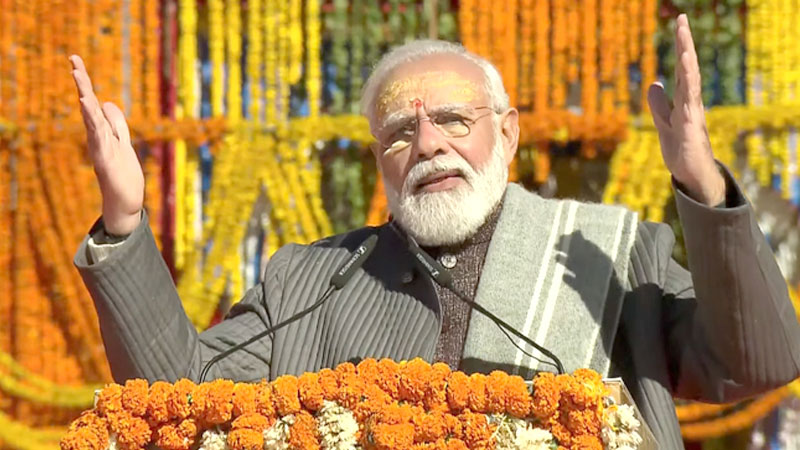 Prime Minister Shri Narendra Modi laid foundation stones and dedicated to the Nation various development projects in Kedarnath on 05 November, 2021. He inaugurated Shri Adi Shankaracharya Samadhi and unveiled the statue of Shri Adi Shankaracharya. He also reviewed and inspected the executed and ongoing infrastructure works. The Prime Minister also offered prayers at the Kedarnath Temple. Prayers were offered and celebrations held at 12 Jyotirlingas and 4 Dhams and many places of faith all over the country along with the event at Kedarnath Dham, all events were linked to the main event at Kedarnath Dham.

Addressing the gathering, Prime Minister Shri Modi evoked the great spiritual rishi tradition of India and expressed his indescribable joy on coming to Kedarnath Dham. Recalling his interaction with soldiers at Nowshera, he said, “On Diwali, I took the feelings of 130 crore Indians to soldiers, today, on Govardhan Puja, I was on the land of soldiers and in the divine presence of Baba Kedar”. The Prime Minister quoted a verse from Ramcharitmanas- ‘अबिगत अकथ अपार, नेति-नेति नित निगम कह’ meaning some experiences are so supernatural, so infinite that they cannot be expressed in words. He said this is how he feels under the shelter of Baba Kedarnath.
The Prime Minister said that new facilities like shelters, facilitation centres will ease the lives of priests and devotees and allow them to fully immerse in the divine experience of the pilgrimage. Recalling the Kedarnath floods in 2013, the Prime Minister noted that damage caused by the floods years ago was unimaginable.

Shri Modi said that the third decade of the 21st century belongs to Uttarakhand. He informed that work is going on at a fast pace on the Chardham road project, connecting with the Chardham highways. In future, the work has started so that devotees can come here to Kedarnath ji through cable car. There is also the holy Hemkund Sahib Ji nearby. Work is going on to build a ropeway to make the darshan in Hemkund Sahib ji easy. “Keeping in mind the immense potential and full faith in the capabilities of the people of Uttarakhand, the State government is involved in the ‘mahayagya’ of Uttarakhand’s development”, he said.

Shri Adi Shankaracharya Samadhi has been reconstructed after the destruction in the 2013 floods. The entire reconstruction work has been undertaken under the guidance of the Prime Minister, who has constantly reviewed and monitored the progress of the project.