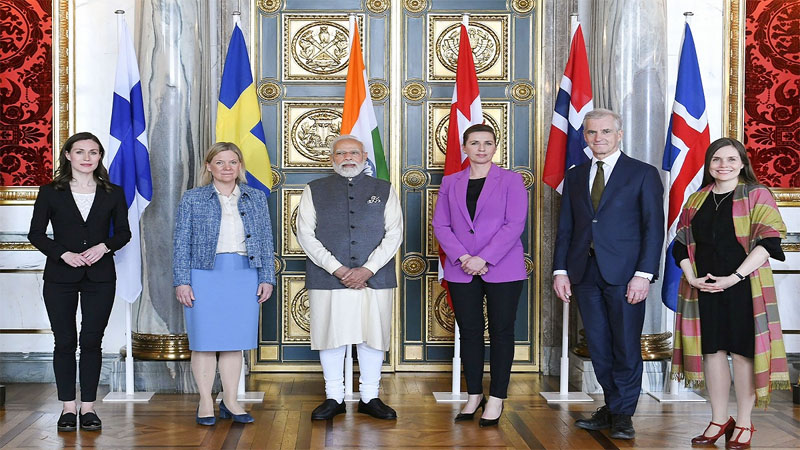 Prime Minister Shri Modi recently returned from a trip to Europe. During his trip, he attended multilateral and several bilateral meetings. In addition to attending the 6th India-Germany Inter-Governmental Consultations in Berlin, Shri Modi visited Denmark and participated in the India-Nordic Summit before making a brief working visit to Paris. He congratulated his host, France’s newly re-elected President Emmanuel Macron. PM Modi also met with leaders from Denmark, Finland, Sweden, Iceland, and Norway in Copenhagen prior to the India-Nordic Summit.
Modi’s era witnesses a changing landscape in India’s relations with Europe, and European countries are positively engaging with India. Both sides’ proximity is critical as India’s and its diaspora’s priorities and preferences shift. They now prefer Europe to the United States of America, as evidenced by the fact that the majority of recipients of EU Blue Cards are Indians.

Professor Gulshan Sachdeva, an expert on India-EU engagement, commented on the PM’s visit, saying, “Indians continue to receive the most EU Blue Cards, which are intended to attract highly skilled professionals to Europe. Germany has issued the largest number of Blue Cards within the EU, and more than one-fourth of these cards have been issued to Indians. New Delhi has already signed a migration and mobility agreement with France.” Both countries reaffirmed their commitment to implementing the Partnership Agreement on Migration and Mobility, which entered into force on October 1, 2021. During PM Modi’s visit, Germany also signed the ‘Joint Declaration on the Initialling of the Agreement on a Comprehensive Migration and Mobility Partnership’ with India. These measures will promote people-to-people contact between India and European countries. The importance of strong people-to-people contacts through education, culture, mobility, and tourism was also emphasised at the second India-Nordic Summit.

India is one of the fastest growing economies. India does not want its growth at the cost of environment. Modi Govt. emphasizes on clean energy-driven growth. Therefore, this visit saw the second most important collaboration in the field of green energy. After seven years of jointly launching the International Solar Alliance at CoP 21, India and France’s commitment to combating climate change is stronger than ever, both in terms of mitigation and adaptation. Because renewable energy development is one of the critical solutions for this transition, India and France reaffirm their continued support for the International Solar Alliance’s goals. Both also agreed to look into opportunities to collaborate on just energy transition pathways, including through the G7, in order to accelerate renewables deployment and access to affordable and sustainable energy.

As part of its commitment to clean energy, India invited France to join its initiative to make India a Green Hydrogen Hub through its National Hydrogen Mission. Both parties are eager to foster cooperation on decarbonized hydrogen, including aspects related to regulation, certification, and standardisation of such hydrogen, in order to build strong industrial partnerships, and have agreed to finalise a roadmap to move this cooperation forward soon. Both parties will collaborate to establish industrial partnerships to strengthen their solar energy production capacities in order to supply Asian and European markets with an integrated supply chain. With Germany, India signed an agreement on the development and cooperation in renewable energy. Both countries underlined their firm commitment to holding the increase in the global average temperature to well below 2°C above pre-industrial levels and pursuing efforts to limit the temperature increase to 1.5°C above pre-industrial levels, bolstering a just transition towards renewable energies. In Denmark, Prime Ministers Ms. Mette Frederiksen and Shri Narendra Modi reviewed the progress of the India-Denmark Green Strategic Partnership. Their discussions covered cooperation in renewable energy, especially offshore wind energy, and green hydrogen.

The Prime Minister’s trip also witnesses the progress of Aatmnirbhar Bharat. Mazagon Dock Shipbuilders Limited (MDL) in Mumbai is building submarines in collaboration with the Naval Group of France. The six Scorpene submarines built at MDL in Mumbai demonstrate the extent to which technology has been transferred from France to India in line with the “Make in India” initiative.. During the bilateral meeting both sides agreed to find creative ways for France’s deeper involvement in the “Atmanirbhar Bharat” (Self-reliant India) efforts in advanced defence technology, manufacturing and exports, including through encouraging increased industry to industry partnerships.

India and European countries shared democratic, rule-of-law, and human-rights values, as well as multilateral responses to global challenges. As a result, India has become extremely important to them in maintaining regional peace and security.
“Many European countries and the European Union are attempting to increase their presence in the Indo Pacific as security actors,” says Sakti Prasad Srichandan, an international politics professor at JNU. They want geostrategic “burden sharing” with other regional and global actors who share their concerns. Because of their shared values and interests, India has emerged as a reliable regional partner for them. The Modi government’s increased emphasis on Europe in India’s foreign policy strengthens this tilt toward the Indo-Pacific.”

Different stand over Ukraine crisis could not come in the way of India’s deepening friendship and engagement with European countries. Prime Minister Shri Narendra Modi’s diplomatic skills and efforts to establish personal relationships with leaders bring India closer to the nations and position India as a rule-shaper rather than a rule-taker.