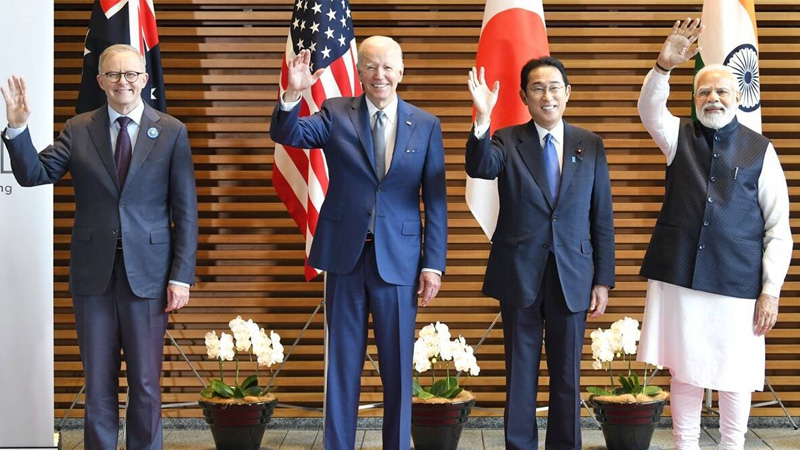 The summit was very productive and fruitful as it was marked by a cooperative and constructive agenda. The foremost important highlight of the meeting was action-oriented cooperation among Quad partners as well as between the Quad partners and the countries of the Indo-Pacific for a free, open, and inclusive Indo-Pacific, aimed at peace, stability, and prosperity in the region. On 23rd May in order to prepare their economies for the future, the Quad leaders along with the virtual presence of leaders of other partners countries viz. Australia, Brunei, Indonesia, Republic of Korea, Malaysia, New Zealand, Philippines, Singapore, Thailand, and Vietnam launched the process to establish the Indo-Pacific Economic Framework for Prosperity(IPEFP). This framework is intended to advance resilience, sustainability, inclusiveness, economic growth, fairness, and competitiveness for our economies.

Discussions during the summit were focused on mutually beneficial consultations. Second, the summit reaffirmed their unwavering support for ASEAN unity and centrality and for the practical implementation of the ASEAN Outlook on the Indo-Pacific. It welcomed the EU’s Joint Communication on the EU Strategy for Cooperation in the Indo-Pacific, which was announced in September 2021 and increased European engagement in the Indo-Pacific region. They strongly opposed any coercive, provocative, or unilateral actions that seek to change the status quo and increase tensions in the area, such as the militarization of disputed features, the dangerous use of coast guard vessels and maritime militia, and efforts to disrupt other countries’ offshore resource exploitation activities.

The third focus of the summit was on common efforts to respond to COVID-19, including, in particular, the post-pandemic recovery and strengthening of health security and health-related infrastructure. Fourth, was to work together to promote infrastructure delivery, as well as efforts to bridge the infrastructural gaps in the Indo-Pacific region, and do it in a manner that does not burden the countries of the region with unsustainable debt, and unsustainable infrastructure projects. Fifthly, the Quad leaders also welcomed a new Indo-Pacific partnership in maritime domain awareness, a regional initiative to help countries bolster their capabilities to respond to humanitarian and natural disasters as well as to combat illegal fishing. Next, shape and build partnerships for greater cybersecurity and for transparent, trusted, and reliable supply chains across the region, including in particular in the field of critical and emerging technologies. Quad leaders also issued a strong condemnation of all forms of terrorism and a call for expeditiously bringing to justice the perpetrators of the Mumbai and Pathankot terror attacks. Also, coordinate more effective and timely responses to humanitarian assistance and disaster relief incidents in the region in the future through the agreed Quad HADR guidelines.
Prime Minister Shri Modi has also participated in the formal launch of the Quad STEM fellowship, which will be offered to 25 students from each of the Quad countries. The Prime Minister towards the end of the Quad Summit deliberations also put forward specific proposals that could contribute to guiding the Quad agenda in months and years ahead.

First, with regard to the bilateral meeting between Prime Minister Modi and President Biden, both leaders appreciated the importance and need for regular interactions between the top leaders of the two countries. They also reiterated their shared commitment to maintaining a free, open, and inclusive Indo-Pacific region. Prime Minister Shri Modi and President Biden welcomed the signing of the Investment Incentive Agreement that happened on 24 May. This agreement will boost investment by the US Development Finance Corporation in sectors of mutual prosperity.

Prime Minister Shri Modi welcomed the participation of the US industry in the Indian Defense manufacturing under the Make in India and Aatmanirbhar Bharat program. A new initiative for critical and emerging technologies iCET was launched to forge collaborations, including with the participation of government, industry, and other stakeholders on both sides in this very important area of critical and newly emerging technologies. On 24 May Prime Minister Shri Narendra Modi also attended the launch of the Indo-Pacific Economic Framework of Prosperity along with the President of the US and Prime Minister Kishida of Japan. A Joint Statement has also been issued to underline the vision and key elements envisaged in the Indo-Pacific Economic Framework. The IPEF framework is structured around four pillars, and these are currently being negotiated among the Quad countries. And these four pillars are one, relating to trade; two, supply chains; three, infrastructure, clean energy and decarburization; and four, tax and anti-corruption.

Prime Minister Shri Modi also held a bilateral meeting with the Australian Prime Minister, Mr. Anthony Albanese, earlier on the sidelines of the Quad Leaders’ Summit. The Prime Minister congratulated the Australian Prime Minister on his election victory. And both leaders reviewed the multifaceted cooperation between the two countries under the framework of the Comprehensive Strategic Partnership that includes important areas of trade and investment, defence manufacturing, renewable energy, in particular, green hydrogen, education, science, and technology; in particular, the new and emerging areas of technology, agricultural research, sports, and people-to-people ties between the two countries. Both prime ministers reaffirmed their desire to continue the positive momentum in the bilateral relationship. Prime Minister Modi extended an invitation to his Australian counterpart to visit India at an early date.