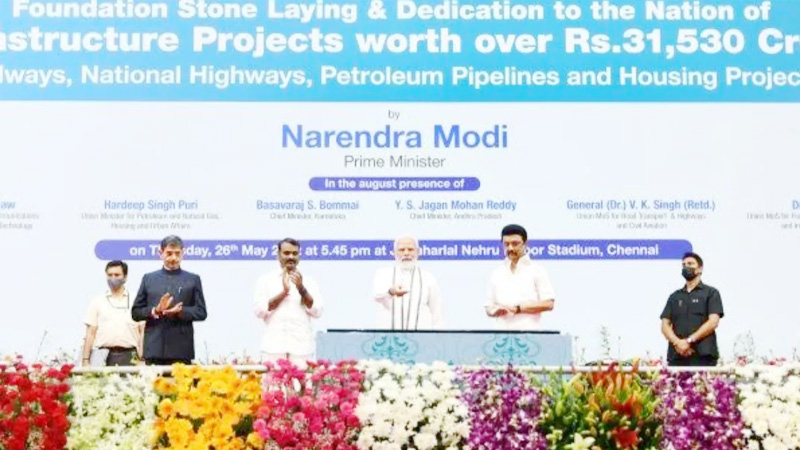 Prime Minister Shri Narendra Modi on 26 May dedicated to the nation and laid the foundation stone of 11 projects worth over Rs 31,500 crore in Chennai. These projects will boost infrastructure development, enhance connectivity and give an impetus to ease of living in the region. Addressing the gathering, the Prime Minister expressed his happiness to be back in Tamil Nadu. “It is always wonderful to be back in Tamil Nadu. This land is special. The people, culture and language of this state are outstanding” he said at the outset. He said that someone or the other from Tamil Nadu is always excelling. He recalled hosting the Deaflympics contingent and said “this time it was India’s best performance in the tournament. Out of the 16 medals we have won, youngsters from Tamil Nadu had a role in 6 of those medals”.

The Prime Minister expressed his happiness that five railway stations are being redeveloped. This modernisation and development is being done keeping in mind the needs of the future.

He said that in the project inaugurated or laid the foundation stones of, a thrust on road connectivity is visible. This is so as it is directly linked to economic prosperity. He said that Bengaluru – Chennai Expressway will connect two major centers and 4 Lane double decker elevated road connecting Chennai Port to Maduravoyal will make Chennai port more efficient and decongest the city. The Prime Minister expressed his happiness that five railway stations are being redeveloped. This modernisation and development is being done keeping in mind the needs of the future. At the same time, it will merge with local art and culture. Madurai-Teni Railway Gauge Conversion Project, he said, will help the farmers as it will give them new markets.

The Prime Minister congratulated all those getting houses as a part of the historic Chennai Light House project under the PM-Awas Yojana. “This has been a very satisfying project as we started a global change.. And in record time the first project has been realized and I am glad that it is in Chennai”, he said.

The Prime Minister noted that the multi-modal logistic parks will be a paradigm shift in the freight ecosystem of our country. Each of these projects across various sectors will boost job creation and our resolve to be Atma Nirbhar, he said.

The Prime Minister stressed that the Government of India is fully committed to further popularising Tamil language and culture. In January this year, the new campus of Central Institute of Classical Tamil was inaugurated in Chennai. The new campus is fully funded by the Union Government. He added that the ‘Subramania Bharati Chair’ on Tamil Studies at Banaras Hindu University was recently announced. He said that since BHU is located in his constituency, the joy was extra special.

The Prime Minister said Sri Lanka is passing through difficult times. I am sure you are concerned with the developments there. As a close friend and neighbour, India is providing all possible support to Sri Lanka. The Prime Minister recalled that he was the first Indian Prime Minister to visit Jaffna. The Government of India is undertaking numerous projects to assist Tamil people in Sri Lanka. These projects cover healthcare, transportation, housing and culture.