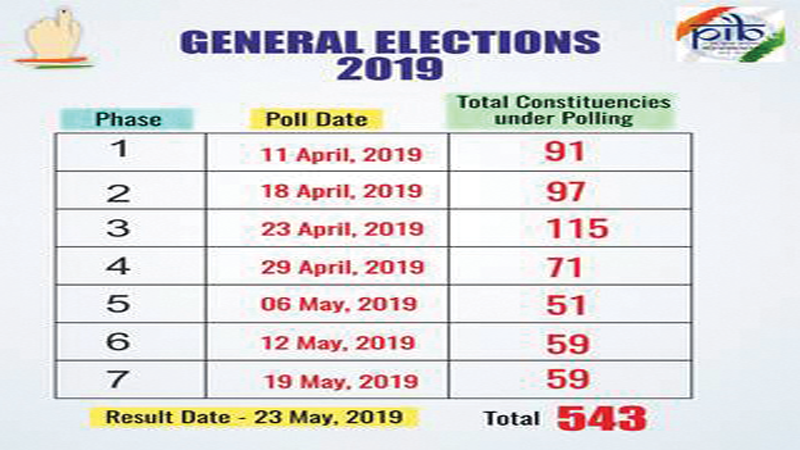 Lok Sabha elections will begin on April 11 and will be held over seven phases followed by counting of votes on May 23, the Election Commission has announced on 10 March, 2019.

Chief Election Commissioner Sunil Arora said the model code of conduct would come into immediate effect from March 10 and 10 lakh polling stations would be set up this time as against about 9 lakh in 2014.

Announcing the schedule for 2019 Lok Sabha polls, the Election Commission said the ‘voter verifiable paper audit trail’ (VVPAT) will be used in all polling stations this time. The first phase will be held on April 11, second on April 18, third on April 23 and fourth on April 29, fifth on May 6, sixth on May 12 and seventh phase on May 19. Counting of votes for all seven phases would be done on May 23, the EC said. Anantnag Lok Sabha seat in J&K would vote in three phases due to security reasons, the ECI said.

Among other things, the model code of conduct bars the government from announcing any policy move that may impact voters’ decision. The ECI said all political advertisements on social media will need pre-certification.

Prime Minister Shri Narendra Modi has given best wishes to the Election Commission, all those officials and security personnel who will be on the field, across the length and breadth of India assuring smooth elections. India is very proud of the ECI for assiduously organizing elections for several years, he said.

PM Shri Modi said, “The festival of democracy, Elections are here. I urge my fellow Indians to enrich the 2019 Lok Sabha elections with their active participation. I hope this election witnesses a historic turnout. I particularly call upon first time voters to vote in record numbers.


Assembly polls in Andhra Pradesh, Arunachal Pradesh, Sikkim and Odisha will be held simultaneously with the respective Lok Sabha constituencies.

President’s rule to continue in J&K

On J&K, the ECI said security situation is being monitored. Regarding holding elections ECI has sought info from the State administration. EC has assessed the ground situation and preparedness for the polls, also considering recent developments, sought comments from MHA and also visited the State, had meeting with all political parties and administration officials, based on the findings and availability of forces, EC has decided to announce only the parliamentary elections in the State, decision on holding Assembly elections to be taken soon, he says. So, Assembly elections in Jammu and Kashmir not to be held along with Lok Sabha polls.