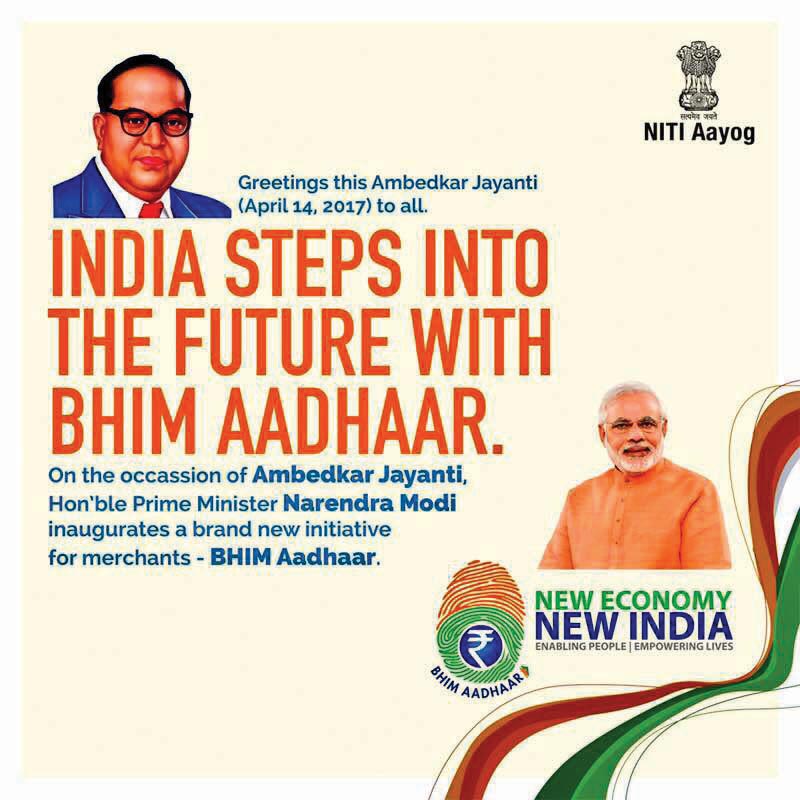 Enroute to the digital payments gaining the proportions of a mass movement, the Prime Minister Narendra Modi launched on April 14 a series of initiatives on the 126th birth anniversary of Dr. Bhim Rao Ambedkar in Nagpur. He launched the BHIM Aadhaar platform for merchants, Cash back and Referral bonus schemes for BHIM and declared about 75 townships going less-cash. The Prime Minister felicitated the winners of the Mega draw of the two major incentive schemes to promote digital payments- Lucky GrahakYojana and DigidhanVyapaarYojana..

Launching BHIM-Aadhaar digital payment platform, Prime Minister said that the BHIM App is positively impacting several lives across the nation. He said that the Digi-dhan movement is also a cleansing mission to fight the menace of corruption. BHIM-Aadhaar, the merchant interface of the BHIM App, will pave the way for making digital payments by using the Aadhaar platform. Any Indian citizen can pay digitally using their biometric data like their thumb imprint on a merchants’ biometric enabled device which could be smart phone having a biometric reader. Any citizen without access to smart phones, internet, debit or credit cards will be able to transact digitally through the BHIM Aadhaar platform. Already, 27 major banks are now on board with 7.15 lakh merchants so that they can start accepting payments using BHIM Aadhaar.

The Prime Minister also launched two new incentive schemes for the BHIM – Cash back and Referral bonus – with an outlay of Rs. 495 crore for a period of six months. This is to ensure that the culture of digital payments permeates down to the grassroots. Under the Referral bonus scheme both the existing user who refers BHIM and the new user who adopts BHIM would get a cash bonus credited directly to their account. Under the Cashback scheme the merchants will get a cash back on every transaction using BHIM. Both schemes are to be administered by MEITY and implemented by NPCI.

The initial two incentives schemes viz., Lucky GrahakYojana and DigiDhanVyaparYojana, came to an end after a rigorous 100 day information, education and communication campaign led by NITI Aayog to make digital payments a mass movement in India. Under the scheme Rs.258 crore of prize money was won by 16 lakh winners, including customers and merchants belonging to different corners of the country and from varied walks of life. The lucky winners the Mega Draw were felicitated by the Prime Minister on this occasion.