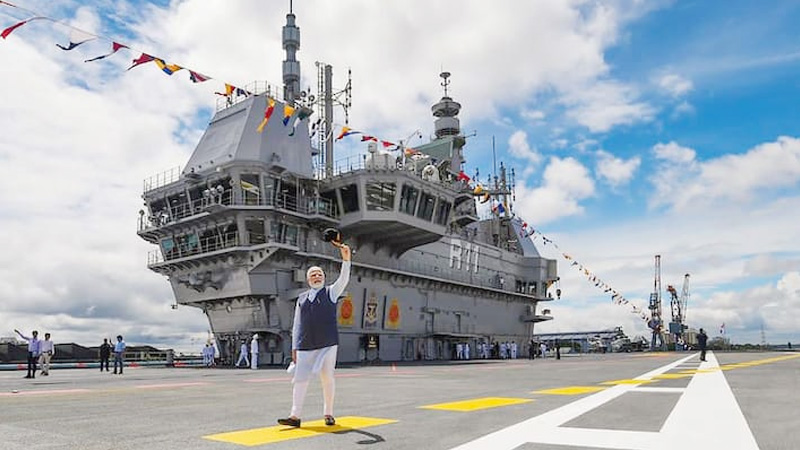 Prime Minister Shri Narendra Modi began his two-day visit to Kerala on 01 September, 2022 by inaugurating a slew of development projects in the state and addressing a huge public meeting at Nedumbassery Cochin. The highlight of PM’s Kerala visit was commissioning of India’s first indigenous aircraft carrier INS Vikrant in Kochi, inauguration of the Phase-I extension of the Kochi Metro Rail Project and laying the foundation stone for the Phase–II stretch. Shri Narendra Modi also visited Sri Adi Shankara Janma Bhoomi Kshetram at Kalady village near Cochin during his visit.

Addressing a massive public meeting at Nedumbassery near Cochin on 01 September 2022, the Prime Minister said the central government is working to provide homes to the poor and homeless.

• Shri Narendra Modi said the biggest priority of the union government is to provide fundamental facilities to every citizen of the country and build modern infrastructure.
• Under ‘Pradhan Mantri Awas Yojana’, two lakh houses have been approved and more than 1.30 lakh have been completed in Kerala, he noted.
• Shri Modi further said the Centre has spent around Rs 1 lakh crore on various projects in the southern state.
• The central government is working to open at least one medical college in every district, and it will hugely benefit the youth of Kerala.
• To develop modern infrastructure, the BJP government is spending around Rs 1 lakh crore on multiple projects in Kerala.

The Prime Minister Shri Narendra Modi on 01 September, 2022 laid the foundation stone and dedicated to the nation various projects of Kochi Metro and Indian Railways worth around Rs 4500 crore in Kochi.

Addressing the gathering, Shri Modi said that every nook and corner of Kerala is filled with the joy of the holy festival of Onam. He congratulated everybody for these projects that enhance the Ease of Living and the Ease of Doing Business. “On this auspicious occasion, Kerala has been gifted with connectivity projects worth more than Rs 4600 crore”, he said.

Remarking on the long-standing demand of lakhs of devotees, the Prime Minister said it is a joyous occasion for devotees of Sabarimala from across the country and the world who wish to visit the shrine. “The doubling of the Ettumanoor-Chingavanam-Kottayam track will greatly facilitate the darshan of Lord Ayyappa”, the PM added.

“INS Vikrant is a unique reflection of India becoming self-reliant”

Commissioning the first indigenous aircraft carrier INS VIKRANT on 02 September, Prime Minister Shri Narendra Modi said on the coast of Kerala, every Indian is witnessing the sunrise of a new future. This event being held on the INS Vikrant is a tribute to the rising spirits of India on the world horizon. He said we are seeing a manifestation of the dream of the freedom fighters where they envisioned a capable and strong India.

Shri Modi said “Vikrant is huge, massive, and vast. Vikrant is distinguished, Vikrant is also special. Vikrant is not just a warship. This is a testament to the hard work, talent, influence and commitment of India in the 21st century. If the goals are distant, the journeys are long, the ocean and the challenges are endless – and then India’s answer is Vikrant. The incomparable ‘Amrit’ of Azadi ka Amrit Mahotsav is Vikrant. Vikrant is a unique reflection of India becoming self-reliant.”

The PM said, “No challenge is too difficult for today’s India. Today, India has joined those countries in the world, which manufacture such a huge aircraft carrier with indigenous technology. Today INS Vikrant has filled the country with a new confidence, and has created a new confidence in the country.”

• INS Vikrant is designed by Indian Navy’s Warship Design Bureau and built by Cochin Shipyard Ltd.
• Vikrant has been built with state of the art automation features and is the largest ship ever built in maritime history of India.
• The Indigenous Aircraft Carrier is named after its illustrious predecessor, India’s first Aircraft Carrier which had played a vital role in the 1971 war.
• It has a large number of indigenous equipment and machinery, involving major industrial houses in the country as well as over 100 MSMEs.
• With the commissioning of Vikrant, India will have two operational Aircraft Carriers, which will bolster the maritime security of the nation.
• During the event, the Prime Minister also unveiled the new Naval Ensign (Nishaan), doing away with the colonial past and befitting the rich Indian maritime heritage.