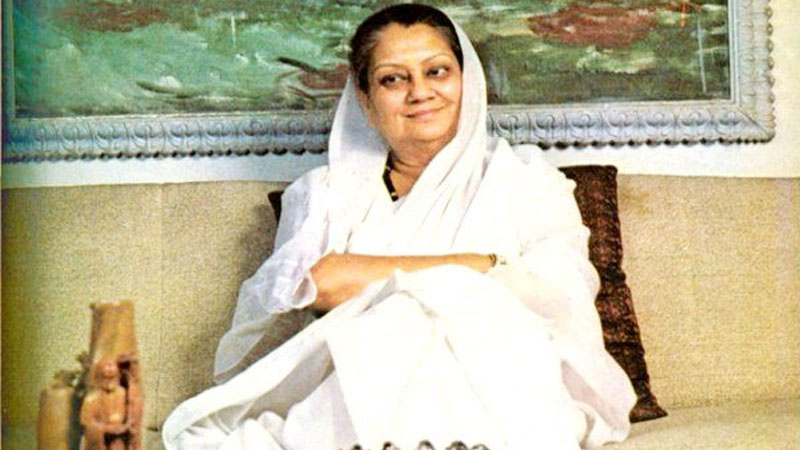 Rajmata Smt. Vijaya Raje Scindhia is remembered as a towering leader of BJP and one of the founders of the party. She belonged to erstwhile Royal family of Gwalior.
Born in 1919 at Sagar in present-day Madhya Pradesh, Smt. Vijaya Raje Scindhia was the eldest child of Thakur Mahendra Singh, a government officer, by his second wife, Chuda Devashwari Devi. She was named Lekha Divyeshwari Devi at birth. Her father was a deputy collector in the provincial administration. Her mother, who belonged to the influential Rana family of Nepal, died at Vijaya Raje’s birth. In 1941, at the age of 22, Lekha was married to Jivajirao Scindia, Maharaja of Gwalior, one of the largest, richest and highest-ranking 21-gun-salute princely states in India. As per tradition, a new name was chosen for ‘Lekha’ based upon the matching of the couple’s horoscopes, and she assumed the name ‘Vijayaraje Scindia’.She had active association with the Jana Sangh and later with the Bharatiya Janata Party.

Rajmata Vijayaraje entered into electoral politics in 1957 when she contested and won the Guna Lok Sabha seat in Madhya Pradesh on a Congress ticket. Five years later, she won on a Congress ticket from Gwalior. Later, she quit the Congress and won the Guna seat in 1967 on Swatantra Party’s ticket. She again soon joined Bharatiya Jan Sangh and resigned from Lok Sabha to take part in state politics. She was elected from Karera assembly seat in Madhya Pradesh as the Jan Sangh candidate in 1967 and plunged headlong into state politics.

Jan Sangh defied the Indira-wave in the 1971 Lok Sabha polls to win 3 seats in Gwalior region – Rajmata Vijaya Raje Scindia from Bhind, Shri Atal Bihari Vajpayee from Gwalior and Madhavrao Scindia from Guna, though he later left the party. Vijayaraje Scindia did not contest Lok Sabha elections in 1977 and 1984 and lost to Smt. Indira Gandhi in Rae Bareli in 1980. In 1989, she won from Guna as member of Bharatiya Janata Party (BJP), and retained the seat in 1991, 1996 and 1998. She did not contest the elections in 1999 due to old age. She was jailed by Indira Gandhi during the Emergency, ultimately sharing a cell with fellow Rajmata and MP, Gayatri Devi, in Tihar Jail.

Vijayaraje came to the forefront of the BJP leadership in 1980 when she was made one of its vice-presidents. She played a key role in propagating the Ramjanmabhoomi movement and was considered a committed nationalist. She remained a BJP vice-president until 1998 when she stepped down on health grounds and quit electoral politics. She left for her heavenly abode in January 2001. With her demise the BJP lost a powerful matriarchal figure.