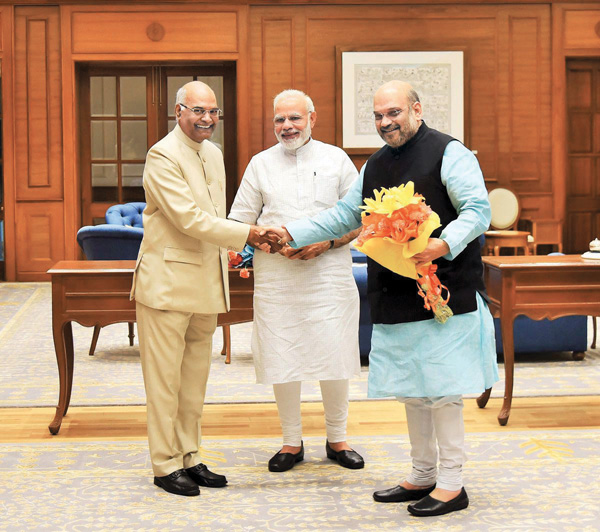 NDA’s nominee Shri Ramnath Kovind won presidential election by more than two-thirds of the total electoral college votes. Shri Ramnath Kovind secured over 65% of votes over rival Meira Kumar, who was backed by the Congress and other opposition parties. Shri Kovind received 2930 votes with a value of 7,02,044. He became the first BJP member who was elected as the President of India.

Prime Minister Shri Narendra Modi personally met President elect Shri Ramnath Kovind and congratulated him.BJP National President Shri Amit Shah hailed as “historic” the election of NDA candidate Ram Nath Kovind as the next president and said “It is a victory for the poor, downtrodden and marginalised and their aspirations”.

BJP Senior leader Shri L K Advani congratulated President-elect Shri Ram Nath Kovind on his victory. Soon after he came to know of Shri Kovind’s win in the presidential election, Shri Advani spoke to him and gave him his best wishes.

AIADMK’s Panneerselvam expressed “great joy” on Shri Kovind winning the presidential polls. “Having been elected as the first citizen of India, we wish Mr Ramnath Kovind name and fame due to his skill and service,” Panneerselvam said in a statement.

How the change of guard at the Rashtrapati  Bhavan unfolded

The elaborate ceremony for change of guard in India’s highest Constitutional office started with a gentle knock on the door of President-elect Shri Ram Nath Kovind’s Akbar Road residence.

It was Military Secretary to the President, Major General Anil Khosla, inviting 71-year-old Kovind and his wife Savita to the Rashtrapati Bhavan, where President Pranab Mukherjee was waiting for them in the study.

The two leaders then went to the grand Rashtrapai Bhavan forecourt where they were escorted to the saluting dais.

Shri Mukherjee took the last salute of the President’s Bodyguard (PBG) with President-elect Kovind standing to his left.

He and his successor then drove down Raisina Hill to the Central Hall of the Parliament in a black limousine. Escorting them was grand equestrian procession by the PBG, dressed in white ceremonial uniforms and blue turbans with gold ornamental work.

The road from Rashtrapati Bhavan to Parliament was lined with jawans of the armed forces. (With inputs from PTI) 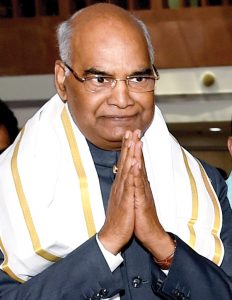 A lawyer, veteran political representative and long-time advocate of egalitarianism and integrity in Indian public life and society, Shri Ram Nath Kovind was born on October 1, 1945, in Paraunkh, near Kanpur, Uttar Pradesh. His parents were Shri Maiku Lal and Smt Kalawati.

Shri Kovind completed his school education in Kanpur and obtained the degrees of B.Com and L.L.B. from Kanpur University. In 1971, he enrolled as an Advocate with the Bar Council of Delhi.

Shri Kovind married Smt Savita Kovind on May 30, 1974. They have a son, Shri Prashant Kumar, and a daughter, Miss Swati. An avid reader, the President has keen interest in reading books on politics and social change, law and history, and religion.
During his long public career, Shri Kovind has travelled widely across the country. He has also visited Thailand, Nepal, Pakistan, Singapore, Germany, Switzerland, France, the United Kingdom and the United States in his capacity as a Member of Parliament.

@narendramodi
“Congratulations to Shri Ram Nath Kovind Ji on being elected the President of India! Best wishes for a fruitful & inspiring tenure. Gladdened by the extensive support for Shri Ram Nath Kovind Ji among MPs & across various states. I thank members of the electoral college. I also congratulate Meira Kumar Ji for her campaign, which was in spirit of the democratic ethos & values we all are proud of.”