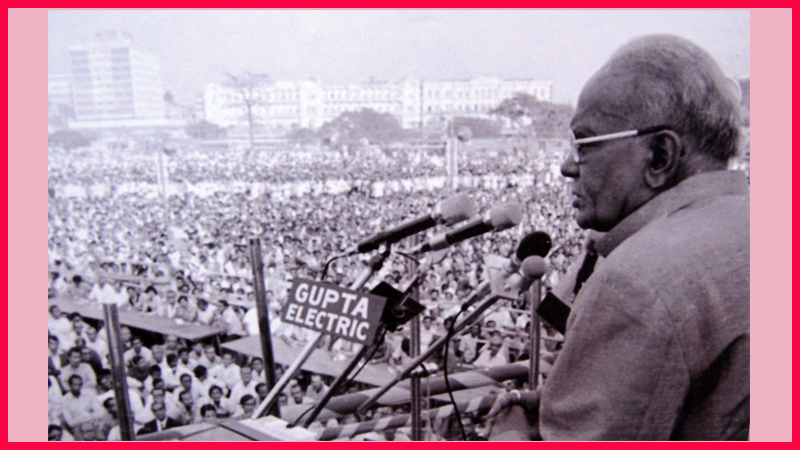 The country is passing through critical times. There is no sphere of our national life, and no section of the society, which is not faced with problems unsurpassed in magnitude and unthought-of of in kind. The first flush of freedom has long since ended. Hopes raised through out our long struggle for independence have been belied. There is disillusionment all round. But it has not created a sense of realism, or a determination to take up the challenge. Instead there has grown a feeling of frustration, a sense of cynicism they pursue, and in the principles they propagate. The problem today is to re-establish this faith. It is more important than the problem of Chinese aggression or of economic reconstruction. Without it we cannot solve either the one or the other. In needs some bold thinking and revolutionary steps?

The present all–round degradation is not accidental. It is the culmination of a series of acts and policies followed by the Congress leadership. The people got the greatest shock of their life when the country was partitioned. The iconoclast succeeded in breaking the idol of Bharatmata, and we simply acquiesced. It demolished the basis of our nationalism, viz intense love for the motherland. India’s independence was nothing more than transfer of political power. It had no idealistic base to inspire the people–or even those who assumed power to selfless service and greater sacrifice. Not only the nitty and integrity of Bharat was destroyed, but everything associated with our age–old culture and tradition was looked down upon. Instead the Government tried to put before the nation ideals of secularism and socialism. These, however, have remained empty slogans. They have not enthused the people. Instead, they have created a vague tendency resulting not a sacrifice, austerity and service, but in self aggrandisement, indolence and indulgence; not in greater assimilation and emotional integration, but in communalism. casteism, regionalism and disruption.

Dr. Sampurnanad in his note to the Congress Daty Seminar on planning, made a reference to this fact when he wrote, “The other day the Working Committee passed resolution about Tibet. In that resolution it made a reference to certain things which have come down to us from time immemorial and have become part of out consciousness, this reference was heartening. I feel that if we addressed our appeal to the nation on the lines of those things which are fundamental components, on which our whole attitude towards life is based, we would…meet with success. People would get the inspiration that they need. They should see before them something that is worth living for, striving for and, if necessary–dying for.” It is ‘Dharma’ in the common language of the people. Unless ‘Dharma’ forms the basis of all our activities, social or individual, it is not possible to sublimate the base nature of man, or to strike a balance between the needs of the society and the aspirations of the individual.

Bharatiya Jana Sangh was born out of this realisation that the party in power, or even others in the opposition, had completely neglected this fundamental basis of Bharat’s life and culture. In their attempt to modernize the country, they were trying to devitalize it by changing its age–old values. If they posed as reformers, they were only deluding the people, and themselves, Dayanand and Gandhiji were great reformers, they brooked no social evil, but they never decried Dharm or minimised its importance. On the contrary they appealed in the name of Dharma, and they succeeded.

To Jana Sangh, indivisibility of the country, oneness of its people, and unity of their culture, is fundamental concepts of our Rattrap Dharma. It was on this basis that the whole country fought the Britishers untidily. This unity permeates our whole history, life and literature inspite of outward diversities. It is because of this faith that Jana Sangh opposed the idea of plebiscite in Kashmir, or discrimination between the people there and in the rest of the country in their rights of franchise and justice. In keeping with out traditional out look of tolerance and respect for all religions we stand for full freedom to every citizen in the matter of worship and faith, but we consider it unnational to differentiate in politics on the basis of anybody’s religious persuasion. We do not recognise minorities based on religion, in the sphere of polities. We would like Christians and Muslims to give up their separatism and be integral parts of the Nation. Their insistence on right of minorities in matters of services, language, ministerial appointments, elections, etc. are a negation of the one–nation theory. Congress, by trying to champion their misconceived cause, is only obstructing the process of national integration, to suit its party ends.