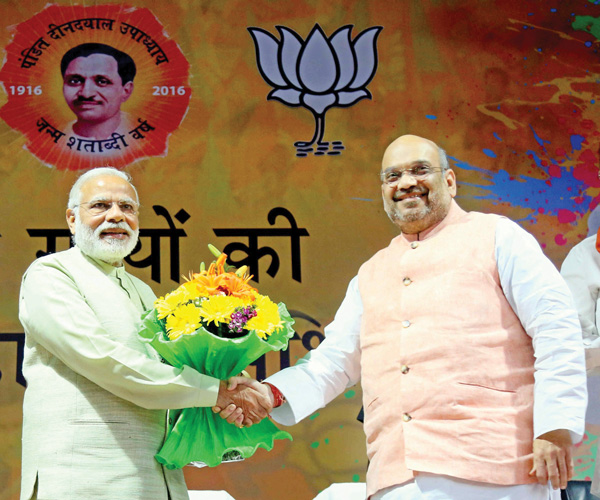 oday, we wish our beloved Prime Minister Shri Narendra Modi a very happy birthday and along as well as healthy life in service of the nation.
Ever since I have known him, Narendra Bhai has never celebrated his birthday. It is work as usual. He is in Gujarat dedicating to the nation the Sardar Sarovar Dam that will benefit lakhs of farmers, taking stock of the ‘Statue of Unity’ project, addressing a public meeting in Dabhoi and interacting with the cooperative sector in Amreli.

I am happy that lakhs of people from all walks of life, across the length and breadth of India are celebrating this day as ‘Seva Divas.’ Several organisations and NGOs, particularly youth driven groups are undertaking a wide range of social service initiatives.

Service or ‘Seva’ indeed is the best way to celebrate Narendra Bhai’s birthday. Narendra Bhai is someone whose heart beats for the poor, downtrodden, marginalized and the farmers of India. His deep concern for their welfaremotivated him to immerse himself in nation building from a very young age. ‘India First’ is a belief that Narendra Bhai has lived at every point of his life.

In Narendra Bhai, the people of India see a compassionateleader to whom they can relate to. They see him as their own, a person working round the clock for their and the nation’s welfare, without any self interest. His popularity has transcended all boundaries.

Narendra Bhai’s life, in many ways, is a personification of the spirit of India. When Narendra Bhai says he will live and die for the poor, these are not empty words. He has seen poverty closely and can understand what it means to be poor- he has lived and seen those struggles. He rose up the ranks through sheer hard-work, determination and blessings of the people. His rise from humble beginnings resonates with an aspirational nation, and inspires the youth to unlock the infinite possibilities of a New India.

It is Narendra Bhai’s sensitivity towards the aspirations of the poor that led to historic poverty alleviation initiatives taking shape at a scale unheard of in the history of India. With Jan Dhan Yojana’s unprecedented success, the banking system was opened to millions who were isolated from the financial mainstream. Further, the government rolled out the biggest social security outreach for the poor.

There is an unwavering faith that Narendra Bhai has in the innovative zeal and spirit of our youth. MUDRA Yojanaoriginates from his firm conviction and it is a matter of joy that the majority of MUDRA’s beneficiaries are from poor households, small towns or rural India. The message to young Indians is clear- if your dream is to fly, the Government will give you wings.

A corrupt system hurts the poor, neo middle class and the middle class the most. It also reduces people’s faith in the system. As soon he took office, the first thing Narendra Bhaidid was to constitute an SIT on black money. Since then,there has been a historic crackdown against black money and corruption through various measures including Demonetisation and Benami law. Honest taxpayers, majority of whom belong to the middle class, finally feel appreciated and valued.

Yes, Narendra Bhai has surely ruffled several feathers by his action against the corrupt and status quo- after all, years of privilege of a select few are now over and the poor are now getting their due. People often ask Narendra Bhai, where do you get the strength to combat so many entrenched groups and in his characteristic style he says, “I am here for the poor. And why should I fear anyone, the nation is my family. I am not here to cement my legacy or have someone inherit it. I will work only and only for India.”

India remembers Sardar Patel for the territorial integration of our nation and we recall the role of Dr. Babasaheb Ambedkar in our social integration. Through initiatives starting from the Jan Dhan Yojana to the GST, Narendra Bhai has set the ball rolling for the economic integration of India.
Narendra Bhai is also the ideal organisation man, blessed with a keen sense of direction, the will to get things done and an eye for detail. From campaigning in remote areas to being a spokesperson or General Secretary, there is no aspect of organisational work that Narendra Bhai has not done successfully. Due to his extensive organisational work, he has lived in almost all districts of India and has experienced first-hand the rich diversity of India.

Ever since his days with the BJP in Gujarat and as General Secretary in Delhi, Narendra Bhai groomed young, self-made and grass root level leaders, instilling in them the drive to serve as opposed to a desire to rule. Think not of becoming someone but of doing something of value, he would often tell youngsters.

I first met Narendra Bhai as a young BJP Karyakarta. That time, the BJP was still an upcoming force in the Indian polity. None of us were drawn to power…in fact it never matters. What matters is that we devote every moment of our time for the welfare of India. Later, I got to work with him closely during the 1995 Gujarat elections, 1998 Gujarat elections and other party forums. I also had the privilege of serving as Home Minister under Narendra Bhai for over seven years, when I witnessed first-hand his grip on administration and how he transformed Gujarat into a model state of development and good governance.

Once again, I join my fellow Indians and the family of BJP Karyakartas in wishing Narendra Bhai on his birthday. We will continue to serve the nation and support him as he takes India to new heights of success and glory.

Let us devote this day, and the coming days to a mission that is very special to Narendra Bhai- the Swachh Bharat Mission. Let us strengthen the ‘Swachhata Hi Seva’ movement with our active and continuous participation so that we can fulfil Mahatma Gandhi’s dream of a clean India. I urge you all to organise or join any cleanliness initiative and share your photos on the Narendra Modi Mobile App. This way, others will see the good work you did and will get inspired to emulate you.
Vande Mataram!