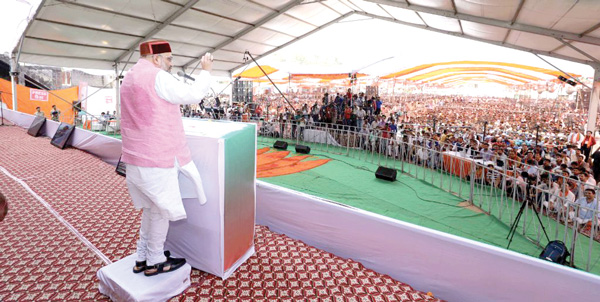 Former BJP CMs in Himachal, Shanta Kumar and Prem Kumar Dhumal were known as ‘Paniwala CM’ and ‘Sarakwala CM’, respectively. However, Virbhadra Singh would be known for the corruption cases against him.

he BJP National President Shri Amit Shah addressed the Yuva Hunkar Rally in Kangra, Himachal Pradesh on 22 September. On the occasion, Himachal BJP also launched its digital campaign for the upcoming assembly elections in the state. The Party President announced a mobile number (7574068068) and urged all those present in the rally to give a missed call to it, to voice their disapproval of the present Congress government.
Shri Amit Shah also released the anthem of the party for the elections. The anthem primarily targets the Congress government on corruption cases. He also released an online portal for receiving donations for the party in Himachal Pradesh.

Shri Amit Shah highlighted the issues of Gudiya rape case, the murder of forest guard Hoshiar Singh in Mandi and the corruption cases against Chief Minister Virbhadra Singh during his address at the rally.

Targeting the Chief Minister, the BJP President said that former BJP CMs in Himachal, Shanta Kumar and Prem Kumar Dhumal were known as ‘Paniwala CM’ and ‘Sarakwala CM’, respectively. However, Virbhadra Singh would be known for the corruption cases against him.

He also said that the Chief Minister was puncturing most of the schemes being allotted to the state by the union government. While the revenue of other states was increasing the revenue of Himachal had reduced by Rs 4,200 crores. The revenue has reduced due to corruption practices of the present Congress government, he said. Shri Amit Shah asked the people to throw the corrupt Congress government of Himachal out from power.
Former CM Shri PK Dhumal, while addressing the rally said that it was pity that High Court had to order CBI probe in both Gudiya rape and murder case and murder of forest guard in Mandi. The integrity of the state agencies was now under question and Himachal had been defamed. The insensitive statements of the Chief Minister in Gudiya rape case had further hurt the people of the state. When the opposition MLAs went to meet the family of Gudiya, her elder sister asked, ‘would Virbhadra Singh term it as ordinary criminal case in case such crime had happened with his daughter’? “We had no answer”, Shri Dhumal said.

Addressing the rally former CM Shri Shanta Kumar said he had been in politics of Himachal for the past 64 years. However, Himachal had not been defamed to such an extent. Many Congress leaders from Himachal, including Virbhadra Singh, former union minister Sukh Ram and AICC secretary Asha Kumari, were on bail in corruption cases. Shri Kumar urged the people to give a fitting reply to the Congress for defaming the Himachal in the forthcoming elections.

Union Minister Shri JP Nadda praised Shri Amit Shah for evolving BJP into the biggest political party in the country. He said that it was Amit Shah’s strategy that brought BJP to power in 18 states in the country. It was only under his leadership that party was voted to power on its own for the first time in Jammu and Kashmir, Maharashtra and Haryana.

Counting the projects allotted to Himachal by the union government, Shri Nadda said that the state had been given 69 National Highways and medical colleges in Mandi, Chamba and Sirmaur. The medical college in Hamirpur could not be opened as the state government did not provide land for the project. A PGI satellite centre at Una and an AIIMS for Bilaspur had also been cleared by the present government, he said.
Shri Satpal Satti addressing the rally said if voted to power the BJP would revoke controversial appointments in Himachal Pradesh Public Service Commission and Staff Selection Commission of state.