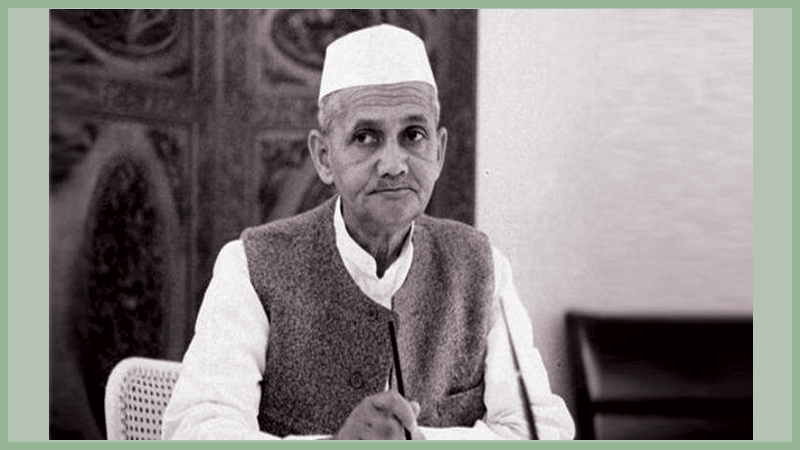 We pay homage to our heroes and great leaders on their birth anniversaries. More often than not, such events pass in a ritualistic manner. But at times, the nation must not only pay homage to its leaders, but also make the younger generation aware of their stellar contribution to the good of the country.

One such statesman is Lal Bahadur Shastri, who is remembered every year along with the Father of the Nation, Mahatma Gandhi, on October 2. Like millions of Indians, Shastri drew inspiration from the Mahatma and plunged into the freedom struggle when he was in his teens. More than 60 years ago, Shastri showed what probity and integrity in public life are all about. Following a train accident at Ariyalur in Tamil Nadu, in which more than 140 people were killed, he resigned as railway minister taking moral responsibility for the incident. Lauding him for his integrity, the then Prime Minister Jawaharlal Nehru said that he was accepting his resignation because it would set an example in constitutional propriety, although Shastri was in no way responsible for it.

Shastri placed the country’s interests above everything else. He displayed a broad outlook at a very young age and dropped his caste-based surname when he was in the seventh standard. His progressive attitude came to the fore when he asked for khadi cloth and a spinning wheel as dowry.

His maiden Independence Day speech in 1964 is as relevant today as it was then. Shastri observed: “We can win respect in the world only if we are strong internally and can banish poverty and unemployment from our country. Above all, we need national unity. Communal, provincial and linguistic conflicts weaken the country. Therefore, we have to forge national unity. I appeal to all to work for national unity and usher in a social revolution to make our country strong. In the ultimate analysis, the strength of the country does not lie in its material wealth alone. It requires people like Mahatma Gandhi, Jawaharlal Nehru and Rabindranath Tagore. It requires the force of character and moral strength. I appeal to our young men to inculcate discipline in themselves discipline and work for the unity and advancement of the nation”. His stress on character and moral strength acquire special significance today, when we see all-round degeneration of values in various fields.

During the Indo-Pakistan war in 1965, Shastri gave the immortal slogan, “Jai Jawan, Jai Kisan,” which continues to inspire every Indian even today. During his prime ministerial tenure, which unfortunately was cut short by his untimely death, Shastri boosted the morale of the nation by leading India to victory over Pakistan. His vision for self-sufficiency in foodgrains led to sowing the seeds of the Green Revolution, and promotion of the White Revolution. The country owes it to him in no small measure that we are self-sufficient in foodgrains production today.

During his speech at the 83rd death anniversary of Swami Dayanand Saraswati in Delhi on October 24, 1965, he said : “The nation cannot afford to relax. It is difficult to say what the future holds for us. Pakistan had not yet given up her policy of aggression. The duty of the nation is therefore clear. The country’s defences have to be strengthened. The people should spare no efforts to strengthen the defences. Side-by-side, food production has to be increased. Food self-sufficiency is as important as a strong defence system. It was for this reason that I raised the slogan, ‘Jai Jawan, Jai Kisan’. The kisan is as much a soldier as the jawan”. Many years later, former Prime Minister A B Vajpayee added “Jai Vigyan” to Shastri’s slogan in order to hail achievements of Indian scientists.

Although he was wedded to the principles of peace, Shastri showed that he was made of sterner mettle when it came to protecting India’s unity and integrity. His response was swift and decisive in ordering the Indian armed forces to retaliate against Pakistan’s unprovoked aggression.

Shastri’s love for the motherland was evident when he responded to Mahatma Gandhi’s call to join the Non-Cooperation Movement at the young age of 16. I would like to mention an incident from his life which showed him to be a man of deeds. Before appealing to the countrymen to skip one meal a week in the wake of the foodgrain shortage, he implemented the measure at his house. His appeal had an electrifying impact and many households across the country responded positively to his call.

His humane quality was reflected in another instance. As Uttar Pradesh’s Minister of Police and Transport, he ordered that the police should use water jets instead of lathis to control unruly crowds. The fact that Shastri was the first transport minister to open the post of bus conductors to women showed how forward-looking he was. His visionary outlook is reflected in the observations he had made at a rural projects meet in Delhi in 1964. “We must inject new elements in the services. Let us introduce professors, economists, teachers, engineers and others, even outsiders, so that there is some freshness, a real exchange of views, a meeting of different approaches,” he said. Perhaps, the government’s decision to open 10 senior civil services positions for lateral entry is in line with this philosophy.

The present times require every Indian to emulate the simplicity, humility, humanism, austerity, hard work, dedication and nationalism displayed by the unassuming second prime minister of India. Following his ideals would be a fitting tribute to him on his birth anniversary. Along with Jawaharlal Nehru, the nation must always remember the contributions of leaders such as Sardar Vallabhbhai Patel, B R Ambedkar, Lal Bahadur Shastri and Syama Prasad Mookerjee in independent India.