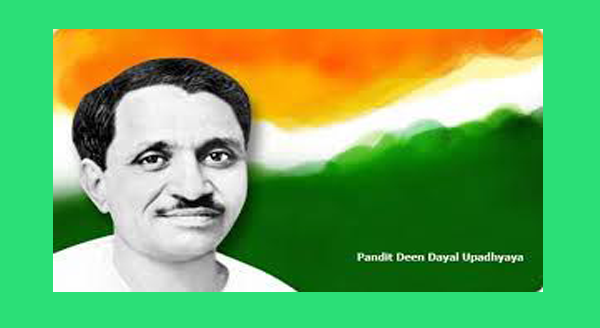 WE’ is the most important word. Everything depends upon a corporate life. Even prosperity is the name of a certain condition of collective life. Once a friend who had returned from a tour of a foreign country very sadly said, “All countries in the world have only one impression of India- that it is a country of beggars.’’ I asked him, “Did you beg ?” He replied, “No but how can people say India begs alms ?’’ In other words an insult to the nation was an Insult to all of us. On the other hand when the Indian armed forces defeated Pakistan in the Indo-Pak war of 1965, everyone raised slogans of victory and felt proud of the nation’s success. In other words our glory depends upon the glory of the nation.

THE truth is that mental slavery interrupts independent thinking. We must never forget that foreign influence on our outward life consumes our feeling of self-reliance and the time comes when the entire life of society is in danger of coming to an end. Many great societies in the world have been destroyed in this manner. We too would fail to make progress if in all fields of life we accepted blind imitation of foreigners as our basis. Such imitation checks development; hence self-respect alone can be the basis of our whole life and it alone can show us a balanced way of give and take with the outside world.

ORGANISATION means living together. It means an unbroken string of mutual cooperation. Organisation is also naturally necessary because no individual can do anything by himself. Whether you lead a physical life or a metaphysical one, the cooperation of many people is necessary. We may well say that we have done something by ourselves, but if we think a little we would realise that behind every act of ours and behind the result of every such act there is the hand of many of our brethren. Hence every individual must become a part of an organised social life. This is natural. In this lies happiness: prosperity and progress. There is strength in organization, and everything In this world can be achieved through strength. The greatness of organization lies In that It multiplies happiness many times and distributes unhappiness to an equal extent.

There might be activity but there is no oneness on the level of experience. This is not the case with an organisation. Those who come together in an organization have one identity in spite of their being many in number. Their goal, then direction, their thought all these are one, hence then interest is common. Their actions produce a force that is a thousand times greater than their number. Every individual is an entity in himself and yet they are inseparable parts of one single whole. This is the secret of their success.

THE fundamental difference between our position and that of the West is that whereas they have regarded body and satisfaction of its desires as the aim, we regard the body as an instrument for achieving our aims. We have recognised the importance of the body in this light. The satisfaction of our bodily needs is necessary, but we don’t consider this to be the sole aim of all our efforts. Here in Bharat we have placed before ourselves the ideal of the fourfold responsibilities, of catering for the needs of body, mind, intellect and soul, with a view to achieving the integrated progress of man. Dharma, Artha, Kama and Moksha are the four kinds of human effort. Purushartha means efforts which befit a man. The longings for Dharma, Artha, Karma and Moksha are inborn in men, and satisfaction of these give him jay. Of these four efforts, too, we have thought in an integrated way. Even though Moksha has been considered the highest of these Purusharthas, efforts for Moksha alone are not thought to give benefit to the soul. On the other hand, a person who engages in action, while remaining unattached to its fruits, is said to achieve Moksha inevitably and earlier.

THE Bhagwa Flag gives us the message of our culture. It fills us with a sense of sacrifice. It is possible that some people may not be able to hear this message, for only a heart burning with dedication can assess the importance of this message. This flag symbolized the entire history of our nation. It brings alive the words of Vedic Rishis and the lives of great men from Rama, Krishna, Buddha and Mahavir to Tulsidas, Nanak, Chaitanya and Ramdas. It includes the victorious epics of mighty warriors, the temples scattered all over this country and the sacred rivers washing its soil. This flag is the symbol of fire and the characteristic of fire is that not only is it pure by itself but it purifies everything consigned to it. The Bhagwa Flag teaches us to lead a life of such fiery purity.

THERE is a difference between martyrdom and suicide. Suicide is wrong because it is confined to the feeling of ‘I’. But when it is done for ‘We’, it is called martyrdom. When you offer your body for the country, for society, it is a matter of glory. It gives strength to society. Martyrs nourish a great cause. When a collective responsibility manifests itself in the form of ‘We’ it creates a tremendous force. Hence martyrs give new energy to the nation.

THE developments in Tibet and the policy followed in that regard by the Communist Party of India have once again exposed the un-Indian character of this party. Whatever the economic and political systems of Tibet be, no outsider has any right to forcibly change them. If Communists in India, echoing Peking, can justify Chinese aggression in Tibet on grounds of the allegedly reactionary character of the Dalai Lama’s Government, they might as well welcome such an aggression in India if they feel that the Government here continues to be “reactionary’’. It is nothing but base treachery. It is the duty of every patriotic Indian to see that they are not allowed to develop a potential that may some day seriously undermine India’s freedom and security.