The concept of good governance is not confined to formulation of well thought and planned policies only. It is equally about effective implementation. History is evidence to the fact that most brilliant ideas and good policies, unfortunately fail on the count of implementation. Reviewed on this background, the performance of Modi 2.0 makes a significant mark as during just one year, this Govt has been able to implement key promises in with all dexterity at its command. Article 370 that had prevented Jammu and Kashmir from joining the mainstream of aspirational India is now a thing of the past, through CAA, India has discharged its tryst with Humanity and while fighting with Covid-19, the Govt has shown remarkable alacrity in taking a comprehensive view of protecting both, lives as well as livelihoods. And now, the Nation is gearing up resolutely to become self reliant through Atmanirbhar Bharat Abhiyan!

To those doubting Thomases and doomsayers who are always skeptical about the ability of the Govt to implement ambitious plans and schemes, performance of the last six years is a testimony. None other than the Prime Minister himself knows it very well that good governance is also about mastering the art of implementation. Ever since Prime Minister Narendra Modi came to power in 2014, the main focus of the administration has been to formulate strategies for efficacious delivery of the policies and schemes that the government has launched, particularly aimed at socio-economic welfare. Infact, the massive mandate secured by PM Modi in 2019 was the direct impact of effective implementation of these government schemes aimed at bettering the life of the most deprived sections of the society.

As the Modi government completes the initial months of the second stint, it is pertinent to analyse the factors that have helped such remarkable implementation of these game-changing interventions, leading to achieving most targets or at least moving very close to them. While even the World Bank launched its ‘Science of Delivery’ to overcome obstacles in global development, we believe that what was achieved in a country as complex as India is more an ‘Art’ than mere science.

Most countries and international organisations confront struggle with implementation of government policies and schemes. India is no exception to this rule. In India, all these schemes were already under implementation for several years and in more than one form. They tried to address the most basic human needs such as a pucca house, with a toilet, and safe efficacious fuel to cook, affordable medicare, and an electric light in the household. Successive governments have funnelled trillions of rupees but failed to make a dent into living conditions so poor that even a pucca house was a far- fetched dream for millions of Indians. Additionally, there has been an upsurge of creativity in social entrepreneurship. Hundreds of start-ups have emerged with innovative solutions for specific social problems. Yet, in India, millions remained hungry, unhealthy, poorly educated, without a roof and unemployed.

In sharp contrast to this perennial problem, India’s recent success, particularly after 2014, in implementing its flagship socialwelfareschemes has been quite astonishing. What is it that changed so dramatically after 2014? 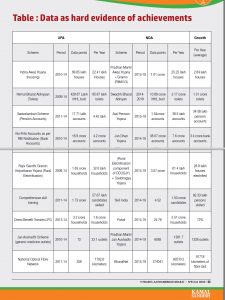 What differed with the Modi led government is the single-minded purposefulness with which these schemes were ideated, fashioned and implemented. They have led to some stupendous successes. The number of beneficiaries, the quality and speed with which the benefits were received and accountability driven monitoring mechanisms differentiate these schemes from the earlier efforts.

Nothing brings this particular fact to the fore more effectively than the hard evidence of achievements so far (Table below). Tableestablishes beyond doubt that post 2014, in the case of several welfare schemes, the number of beneficiaries has seen an exponential growth along with improved quality of implementation.

The architecture of implementation that was thoughtfully adopted for a more Result Oriented Approach, included the following key common threads/implementation mantras to which we attribute the noteworthy success during 2014-19:

A unified comprehensive vision and design: While outwardly a particular scheme may appear as a standalone scheme, in most cases it is a part of a more holistic approach and hence a wider plan. This has provided a greater sense of purpose besides ensuring a systemic integration of the scheme. The ‘No frills accounts’ created by RBI, were transformed into the Jan Dhan Yojana, with a very long-term broad action plan to provide direct financial assistance of various schemes through these accounts.PMAY mandated convergence of Swachh Bharat Mission, Ujjwala Yojana, and Saubhagya Yojana amongst others.

Keen interest and deep insight of political leadership: Leadership matters the most and hence a keen interest by the apex level leadership, coupled with creative ideas and ways and means for effective implementation suggested adds to the importance of the scheme or programme. Eventually that seems to have played a key role in effective implementation. The comprehensive guidelines of all schemes tie up all loose ends to ensure timely delivery right upto the final beneficiary. Frequent reviews/interactions of apex level leadership with implementers and beneficiaries to improve /add to the schemesindicated purposeful involvement of the leadership.

Effective outreach and involvement: There was a structured attempt to generate greater awareness about the scheme/programme. This ensured wider outreach and participation of beneficiaries and local officials. Schemes like Swachh Bharat Mission (SBM) were structured around behavioural change which was a key differentiator from the previous attempts. Outreach leading to community acceptance and involvement was a pre requisite for its success. No scheme visualized passive acceptance by the beneficiaries.Rather their intrinsic involvement through outreach including some financial contribution has led to sustained success and several spin off benefits.

Aggressive use of info-tech: Greater and more effective use of information technology, including ; among other things a mechanism of 24 x 7 monitoring through dashboards was a universal feature. All schemes mentioned above have been built on the solid foundation of Information Technology based independent reporting and monitoring platforms. Each scheme maintains frequently updated, interactive robust websites with a strong IT backbone. Such reporting narrowed the scope for manipulation unlike paper based reporting. Added to that was the unabashed enthusiastic use of private sector platforms like google play-store for downloading scheme related apps. It was these apps and mobile phone use that created an additional glamour, sense of belonging and accountability for the beneficiary.

Use of space, drone and cutting-edge technologies: Use of latest technologies, including space technology and drone, has been the highlight of effective implementation. Geo-spatial tagging of assets created in PMAY or SBM has provided a tool for hard evidence of created assets, a gap in several previous schemes. National remote sensing capacities and geo spatial technologyharnessed through ISRO’s Bhuvanplatform provide unparalleled public access to asset information, uploading, synchronizing and monitoring.

Single-minded focus on transparency : A more effective transparency mechanism —backed by 100% evidence based decision-making —led to credible selection of beneficiaries and effective plugging of loopholes for corruption. Adopting the direct benefit transfer process for fund transfers in all schemes was a stroke of genius which reduced pilferage to almost zero. Dashboards of progress in the public domain with ability to go down to the smallest unit of delivery added to transparency. The PAHAL Scheme uses transparent IT based processes to ensure removal of fake/duplicate connections, subsidy and cylinders reach genuine users, disincentives diversion and so on.

Stringent measures to ensure accountability: A robust mechanism of accountability ensured monitoring of progress almost on daily or weekly basis.The PFMS has brought in efficiencies, flexibility, monitoring capabilities and oversight in government spending. Weeding out of ghost/fake beneficiaries has been an important collateral benefit. In addition, processes like the centralized public grievance redressal system, monitored regularly at the highest levels created responsibility and accountability through the entire hierarchy.

Every scheme guidelines visualized a well thought out and structured delivery hierarchy and mechanism to monitor the progress of the scheme or programme, ensuring that the flawlessness of the implementation mechanism remains intact, all along.

Greater motivation of implementers: The enhanced level of motivation of officials and employees involved in implementation evolved a sense of collective responsibility of implementation in Mission Mode. Prime Minister’s Awards for best performance at various levels, state level rankings of performance, placing state /division/town performance in the public domain have provided public attention and created ownership of these schemes. PM and senior leaders highlighting these achievements in international fora brought a sense of achievement to those who have been instrumental in implementing these schemes. Encouragingly, implementers buoyed by their success, appear keen to take further leaps in their respective missions/schemes/projects.

The Modi-led government cultivated an art of implementation hitherto never seen in the history of this country. Applying these implementation mantras, it achieved astonishing results of far-reaching consequences through its flagship welfare schemes. The key features of this implementation design have been the single-minded purposefulness at the apex level, improved quality and extended reach of the coverage, targets set to achieve time bound results, evolution of a structured mechanism to ensure last mile delivery, and above all a evolving a system for a literally 24×7 monitoring of implementation where fudging of data is just not possible. This is a significant value added by the Modi Govt to public administration in India, making Good Governance a reality.