The first year of the second term of the Modi government is coming to an end. The events that have happened and are happening in this year of 19/20 are going to surprise everyone. The whole country is marching towards Atmanirbhar Bharat under the leadership of Narendra Modiji while battling a global epidemic like Corona.

However, this first year has been much talked about with many achievements. Many things have happened which no one had even thought of earlier. Since independence, Kashmir has been one of the most turbulent regions due to continuous terrorism, religious hysteria and anti-national activities. There were discussions all over the country about Article 370, the sacrifice of Dr. Shyamaprasad Mukherjee also took place due to this, but no one ever through that it will be solved with such promptness and a new dimension will be added to the unity of the country. The entire country is witnessing the history which has been created by passing the bill in both the houses despite being a minority in the Rajya Sabha. This happened due to the strong initiative taken by country’s Home Minister Amit Shahji.

Keeping in mind the problem of Assam, the emergence of the intruders in the northeastern states, the disturbing Brahmaputra, the national unity, the Modi government also passed the CAA Citizenship Amendment Bill, taking a pivotal role on patriotism and the security of the nation.
The subject of the triple talaq law was also pending for years. In Rajiv Gandhi’s tenure as the Prime Minister, the government, which used minorities for their own selfishness, insulted the court and rejected the self-respect and dignity of millions of Muslim sisters. This historic bill was passed in the House and Muslim sisters were in every household’s role as a wife, sister or in the responsibility of a daughter-in-law, now live with dignity.

For years, the decision of Ram Mandir, which is associated with the identity of the entire country, having presence in every election, also came in this year. The construction of the temple started in a very smooth manner in the country without any extreme reaction or riot, it has also created an atmosphere of satisfaction in the whole country.

The attitude of the government is very important for str engthening the country’s economy and moving towards progress. Keeping this subject in mind, the steps taken by the government towards making the farmers of the country debt free and farming related activities stand on their own, are very important. To realize this government announced credit of Rs 6000 in the bank account of farmers, which was promised by the BJP in the election. The government has taken a strong step in the interest of farmers by fulfilling that too.

The steps taken by the government during the Corona are not only giving relief in times of crisis, but at the same time it is also creating strong infrastructure. With this, the country will also be successful in moving towards self-sufficiency, this government has taken such decisions. Health infrastructure used to cost only 2 percent of the budget till date. Taking the call of time and keeping in mind the need of the country, there is no comparison to the initiatives taken by the government.

As a result of this, despite being so populated, India encounters minimal damage due to Corona. Compared to other affluent countries, the courage that the Prime Minister of India Narendra Modiji has shown by taking the decision on time, we are also able to face this crisis and a different image of our country has been emerged in the world.

Through the MNREGA, the government has done remarkable job of reducing hunger by providing employment in the villages. To provide ration to the migrant labourers wherever they are, the government has provided the facility of getting ration to them in the village by implementing the ‘One Nation-One Ration’ program.
In the last term, the government had done the work of making new laws by removing the old laws and making changes in the path of progress by taking timely decisions. That change had a positive impact in this year’s decisions. The dream of making system business friendly has been fulfilled by the online initiative taken in India.

The steps taken in this year, not only enabled the entire system to become digital and transparent, but it also decreased the cost and became easier. There are no middlemen left in the system, this is a significant contribution of making the system transparent and efficient. While speaking about this budget, Prime Minister Modi has said that the economy of the country will be worth $ 5 trillion. In the budget, the government has made a provision to spend more than Rs 100 lakh crore on infrastructure. Looking at the performance of five years and seeing the beginning of this first year, we have created many new records. Along with the largest cricket stadium in the world, the world’s largest health insurance scheme is also running in India. The world’s largest solar park is being built in India, along with which the largest sanitation program is going on. 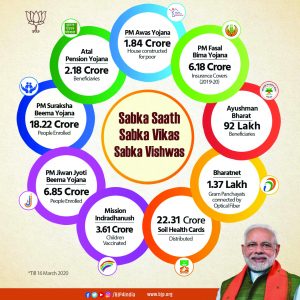 India was ranked 142 in the ‘Ease of Doing Business’ ranking in 2014, and reached on 63rd position in 2019. India has recorded progress in 7 out of 10 prameters. The government has also taken steps towards creating new employment segment in MSME by creating opportunity of self-employment.

This first year of the second term has certainly been a very decisive and paved way for progress. Making remarkable progress in all fields, the work of increasing the pride and dignity of the country has also been done during this period. Shri Narendra Modi has created a new image of India in the world through his leadership. Today, even in the crisis time of Corona, American and other industrialists doing business in China are gradually seeing India as a potential contender for their business.

It has been expressed by the American organization Advocacy Group that many companies have turned to India. Samsung has consolidated its business in China and expanded its plant in India. Sony has announced the closure of its plant in China. Apple has started its production unit in Bengaluru. So, we can say that the first year of the Modi government has definitely proved to be a pioneer in the progress of the country by setting a new record.