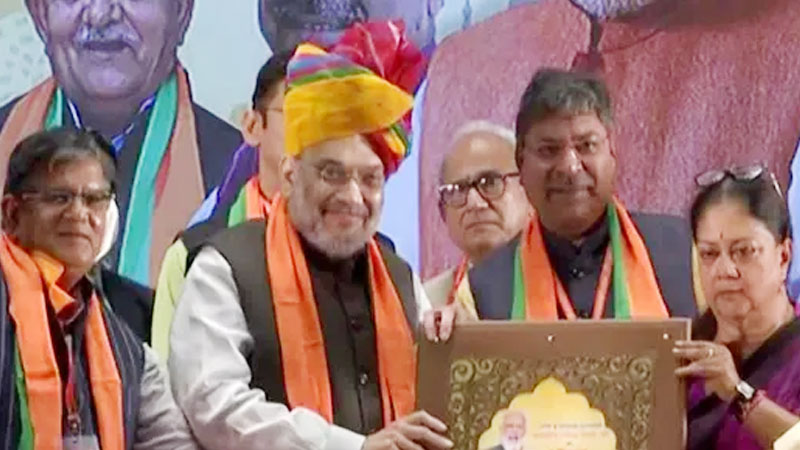 At the BJP’s state Executive Committee meeting Shri Shah asked the party Karyakartas to stand united and start preparations for Mission 2023 under the leadership of Prime Minister Shri Narendra Modi.

While addressing ‘Janpratinidhi Sankalp Sammelan’ in Jaipur, Shri Amit Shah predicted a resounding victory for BJP in the next Assembly elections in the state. BJP will win 2023 Rajasthan Assembly polls with a 2/3 majority. This useless and corrupt Ashok Gehlot government must go from Rajasthan and BJP should govern, he said.

A day before, Shri Amit Shah also attended ‘’Bada Khana’’ (dinner) with Border Security Force personnel at the Rohitash Border during his visit to the border post in Jaisalmer. He addressed the personnel in the Sainik Sammelan and lauded the valour of the Jawans. Shri Shah’s visit to Jaisalmer near India-Pak border coincides with the 57th Raising Day event of the BSF being celebrated there for the first time. He offered prayers at the Tanot Rai Mata temple after reaching Jaisalmer on 04 December, 2021.

Shri Amit Shah also met 1971 war hero Naik Bhairon Singh Rathod in Jaisalmer. Appreciating him Shri Shah twitted, “I had the privilege of meeting 1971 war Longewala Post hero Veer Naik Bhairon Singh Rathod in Jaisalmer. Your valor and love for the motherland have created a place of immense reverence in the history of the country and the hearts of the countrymen”.