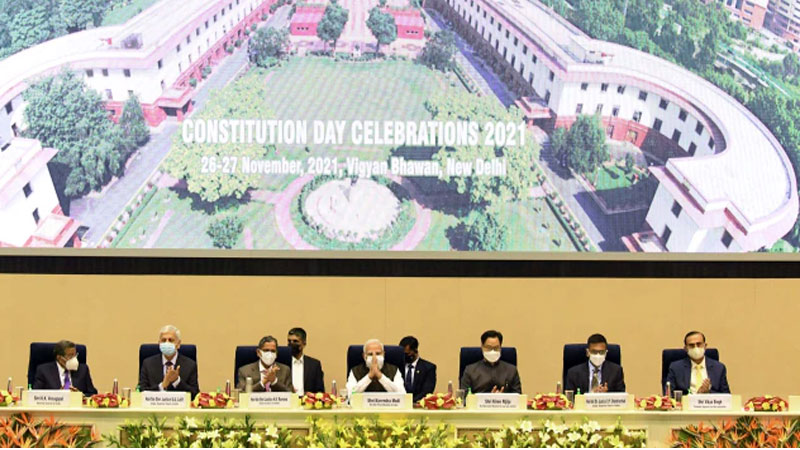 Addressing the gathering, the Prime Minister said in the morning he was amidst the colleagues from the legislature and the executive. And now he was among all the learned members of the judiciary. “We all may have different roles, different responsibilities, different ways of working, but the source of our faith, inspiration and energy is the same – our Constitution”, the Prime Minister emphasized.
Shri Modi said that our constitution makers gave us the constitution cherishing the great tradition of India of thousands of years and in the light of the dreams of the people who lived and died for freedom.

“We all may have different roles, different responsibilities, different ways of working, but the source of our faith, inspiration and energy is the same – our Constitution”

The Prime Minister stressed that even after so many years of independence, a large chunk of the citizens were condemned to suffer exclusion in the areas of basic needs like drinking water, toilets, electricity etc. Working to make their life easier is the best tribute to the constitution. He expressed satisfaction that a massive campaign to turn this exclusion into conclusion is underway in the country.

The Prime Minister remarked that Sabka Saath-Sabka Vikas, Sabka Vishwas-Sabka Prayas, is the most powerful manifestation of the spirit of the Constitution.

Government dedicated to the Constitution, does not discriminate in development and we have done this. Today the poorest of the poor are getting the same access to quality infrastructure, which was once limited to the resourceful people. Today, the country has as much focus on the development of Ladakh, Andaman and North East as it is on metro cities like Delhi and Mumbai, he said.

Referring to recently released results of National Family Health Survey, the Prime Minister said that with regard to gender equality, now the number of daughters is increasing in comparison to men. More opportunities for hospital delivery are becoming available to pregnant women. Due to this the maternal mortality rate, infant mortality rate are decreasing.

Shri Modi said today there is no country in the whole world that apparently exists as a colony of another country. But this does not mean that the colonial mindset too is over. “We are seeing that this mindset is giving rise to many distortions. The most obvious example of this is seen in the obstacles faced by us in the development journey of developing countries. Efforts are being made to close the same means, the same path, for the developing countries, by the means by which the developed world has reached today’s position”,he said. The Prime Minister noted that India is the only country in the process of achieving the goals of the Paris Agreement ahead of time. And yet, in the name of environment, various pressures are created on India.

All this is the result of a colonial mentality. He said “unfortunately due to such a mentality, obstacles are put in the development of our own country. Sometimes in the name of freedom of expression and sometimes with the help of something else”, he emphasized. He added that this colonial mindset is a big obstacle in further strengthening the determination that was created in the freedom movement. “We have to remove it. And for this, our biggest strength, our biggest inspiration, is our Constitution”, he said.