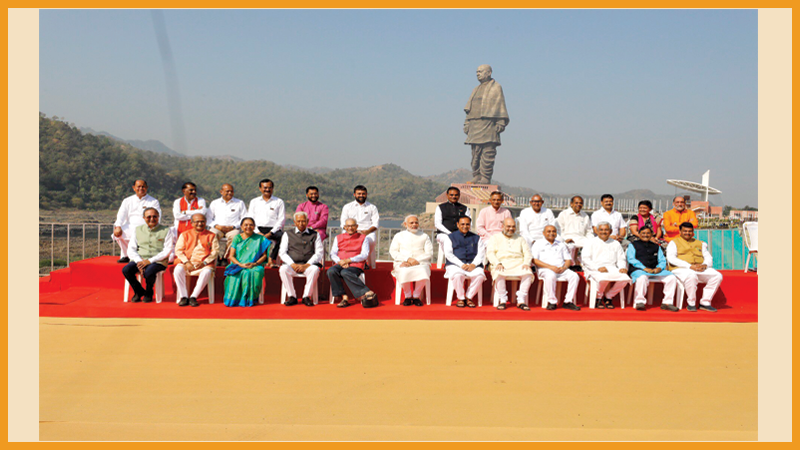 The Prime Minister, Shri Narendra Modi on the occasion of Sardar Patel birthday at Kevadiya in Gujarat on October 31, 2018 dedicated the world’s tallest statue, the ‘Statue of Unity’, to the nation.

The 182 metre statue of Sardar Vallabhbhai Patel, was dedicated to the nation on his birth anniversary, at Kevadiya in Narmada District of Gujarat. On the Occasion BJP National President Shri Amit Shah Gujarat Chief minister along with his cabinet colleagues and Governor of Gujarat Shri OP Kohli were present. Constructed at a cost of Rs 2,989 crore by construction and engineering company Larsen & Toubro Ltd the statue stands in the midst of the Narmada River, on the islet of Sadhu Bet. Sardar Patel is credited for unifying all of the 562 princely states in pre-independence India to form what is today the Republic of India. Thus, the statue has been named ‘Statue of Unity’ as a tribute to his role. This project was thought by Narendra Modi when he I was the Chief Minister of Gujarat.

At the launch ceremony, the Prime Minister and other dignitaries’ poured soil and Narmada water into a Kalash to mark the dedication of the ‘Statue of Unity’ to the nation. The Prime Minister pressed a lever to commence a Virtual Abhishek of the statue.

He inaugurated the Wall of Unity. At the feet of the Statue of Unity, the Prime Minister performed a special prayer. He visited the Museum and Exhibition, and the Viewers’ Gallery. This gallery, at 153 metres height, can accommodate upto 200 visitors at one time. It offers a spectacular view of the Sardar Sarovar Dam, its reservoir, and the Satpura and Vindhya mountain ranges.

The dedication ceremony was punctuated by flypast of IAF aircraft, and performances of cultural troupes. Greeting the people of India on this occasion, the Prime Minister said that the entire country is celebrating Rashtriya Ekta Divas today.

He said today marks a special moment in the history of India. He said that with the Statue of Unity, India has given itself today, a towering inspiration for the future. He said the Statue will continue to remind future generations of the courage, capability and resolve of Sardar Patel. He said that the integration of India by Sardar Patel, has resulted today in India’s march towards becoming a big economic and strategic power.
“The Statue will stand high, not just in meters and feet, but much more in terms of academic, historical, national and spiritual values. My vision is to develop the place as a source of inspiration for ages to come,” PM Modi had said.

The Prime Minister also recalled Sardar Patel’s vision of the administrative services as a steel frame.
He described the Statue of Unity as a symbol of the self-respect of the farmers who gave soil from their land, and iron from their farming implements for the Statue. He said the aspirations of the youth of India can be achieved only through the mantra of “Ek Bharat, Shrestha Bharat.” He congratulated everyone associated with the construction of this Statue. He said the Statue would generate considerable tourism opportunities for the region. He said “The contribution of the tribals, farmers and villagers, who helped make this possible cannot be ignored, I thank them from the bottom of my heart. Without your help and contribution, this would not be possible today. With the Statue of Unity, you (tribals and farmers) have enshrined your names in history too.”

He added,I am amazed when some people of our own country dare to see this initiative from a political view & criticise us like we have committed a huge crime. Is remembering country’s great personalities a crime? PM said further “If it was not for Sardar Sahab’s resolve, then we Indians would have had to take visa to see the Gir lions, pray at Somnath, or to see Hyderabad’s Charminar”. 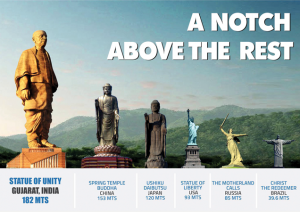 The Prime Minister mentioned that several memorials have been made to recall the contributions of freedom fighters and great leaders, in recent years. Besides the Statue of Unity, he mentioned the museum dedicated to Sardar Patel in Delhi, Mahatma Mandir and Dandi Kutir in Gandhinagar, the Panchtirth dedicated to Babasaheb Bhimrao Ambedkar, the Statue of Sri Chhotu Ram in Haryana, and the memorials of Shyamji Krishna Varma and Veer Nayak Govind Guru in Kutch. He said work is in progress for the museum dedicated to Subhash Chandra Bose in Delhi, the Shivaji statue in Mumbai, and tribal museums across the country.

The Prime Minister spoke of Sardar Patel’s vision of a strong and inclusive India, and said the Union Government is working towards making this dream a reality. He mentioned the efforts to provide a home to all, to provide electricity to all, and towards road connectivity and digital connectivity. He also mentioned the Pradhan Mantri Jan Arogya Yojana. He said that efforts such as GST, e-NAM, and “One-Nation, One-Grid” have also contributed to integrating the nation in various ways.

The Prime Minister spoke of our collective responsibility to maintain the unity and integrity of the nation, and to counter all divisive forces.

“The Statue will stand high, not just in meters and feet, but much more in terms of academic, historical, national and spiritual values. My vision is to develop the place as a source of inspiration for ages to come.”
Shri Narendra Modi,
Honourable Prime Minister of India

At 182 metre, the mammoth replica of Sardar Patel is the world’s tallest statue, leaving behind USA’s Statue of Liberty (93 metre), Japan’s Ushiku Daibutsu (120 metre) and even China’s Spring Temple Buddha (153 metre) statues. The statue has been built to withstand winds of 180km/hour and earthquakes of up to 6.5 Richter scale.