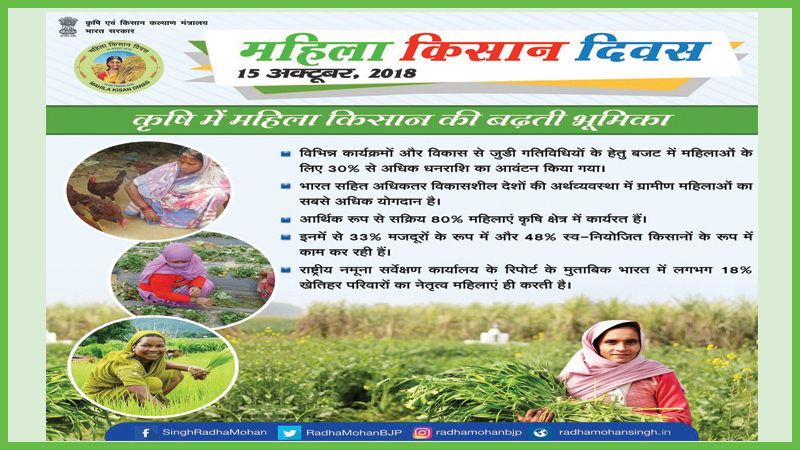 The government has allocated more than 30% funds for women under various major schemes, programs and development related activities in order to bring women in the agriculture mainstream. Stating this on the occasion of Mahila Kisan Diwas, on October 15 Minister of Agriculture and Farmers’ Welfare Shri Radha Mohan Singh informed that about 18% of the agricultural households in India are led by women. In addition to agriculture, women have been making exceptional contribution in horticulture, fisheries, animal husbandry, beekeeping etc.

The Minister disclosed that a research by the Indian Council of Agricultural Research (ICAR) conducted in nine states shows that the participation of women is 75% in the production of major crops, 79% in horticulture, 51% in post-harvest work and 95% in animal husbandry and fisheries.

He further said that a National Gender Resource Centre in Agriculture, set up in the Department of Agriculture Cooperation & Farmers Welfare, has developed a women sensitization module to bring about change in the mindset and behaviour of male program operators. In 2017-18, DAC&FW’s MANAGE, EEI, SAMETI and other institutions have trained 5645 people through 222 programmes. Besides, more than 98.14 lakh women farmers have been trained so far under the ATMA scheme.

Shri Singh said that special importance is being given to the role of women in achieving the goal of doubling farmers’ income by 2022. Keeping this in mind, the inter-ministerial committee formed under the chairmanship of Dr. Dalwai has written a separate chapter on the empowerment of women to double the income of farmers. These efforts will certainly prove to be effective in enhancing the participation of women in agriculture. The Central Institute for Women in Agriculture, Bhubaneswar (Odisha), set up under the ICAR, has also been working in this direction.

The Minister stated that cooperative education programs of women are organized through State Cooperative Societies to ensure womens participation in various activities in the field of cooperatives. Under the National Cooperative Union of India (NCUI), 38.78 lakh women have been trained in the last two years. Similarly, 6.07 lakh and 7000 women have benefited through KVKs and skill training respectively. A total of 53.34 lakh women have benefited during the year 2016-17 and 2017-18. He said that government’s revised ATMA scheme is providing support to the Food Security Groups of the farmers to ensure food security at the domestic and community levels.

Under this, the Women’s Food Security Groups are being given financial assistance at the rate of 2 groups / per block and at the rate of Rs 10,000 per group / per year. The Minister congratulated women farmers and praised their commendable contribution in taking India to the path of Second Green Revolution and in changing the landscape of development in the country.