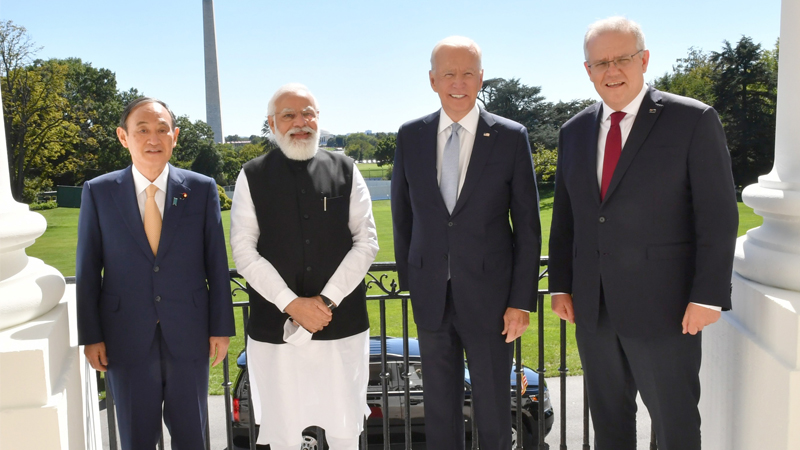 The Prime Minister Shri Narendra Modi arrived in washington DC on 23 September for his three days US visit. At joint base Andrews airbase in Washington, he was given a grand welcome by Indian diaspora.They welcomed PM Shri Modi by waving Indian flags. During his visit he held a bilateral meeting with the US President Joe Biden. He also met Vice President Kamala Harris. He participated in the meeting of the QUAD Leaders’ Summit on 24 September, which was attended by the Prime Minister of Japan and Australia, hosted by the President of the United States. And he also separately had meetings with his counterparts from Japan and Australia. In Washington, he met a number of CEOs of major US corporates. So all in all, it has been a short but very, very comprehensive, very useful visit which allowed for extensive high level interactions.

His address in the United Nations, focused on some important themes. The first theme, was that democracies can deliver, democracies have delivered. The Prime Minister spoke about an array of flagship programmes and initiatives in India that have delivered very successfully to hundreds of millions of citizens, whether it is in the aspect of enabling them to enter into the banking sector by allowing people to open bank accounts, whether it is in terms of participating in health schemes that provide for quality health services to a very large number of our people, health insurance, low cost housing for millions of our citizens being converted from landless to land owners, and many more such path breaking schemes. Also very strong emphasis that the Prime Minister laid was on the issue of technology saying, technology has delivered for us, we have used technology in very many areas of our developmental activity that has enabled us to reach out to people in all parts of the country, every segment of society. The Prime Minister spoke about use of technology in the health sector especially with regard to the ability to immunise hundreds of millions of Indian citizens, in the wake of the COVID-19 pandemic, through the Co-Win platform.

Quad leaders recognize that the most immediate threat to lives and livelihoods in our four countries and the world is the COVID-19 pandemic. And so in March, Quad leaders launched the Quad Vaccine Partnership, to help enhance equitable access to safe and effective vaccines in the Indo-Pacific and the world.

Building on the G7’s announcement of Build Back Better World (B3W)—an infrastructure partnership focused on digital connectivity, climate, health and health security, and gender equality infrastructure—the Quad will rally expertise, capacity, and influence to strengthen ongoing infrastructure initiatives in the region and identify new opportunities to meet the needs there. The Quad will launch the Quad Infrastructure Coordination Group.

Quad countries share serious concern with the August Intergovernmental Panel on Climate Change’s report findings on the latest climate science, which has significant implications for climate action. To address the climate crisis with the urgency it demands, Quad countries will focus their efforts on the themes of climate ambition, including working on 2030 targets for national emissions and renewable energy, clean-energy innovation and deployment, as well as adaptation, resilience, and preparedness. Quad countries commit to pursue enhanced actions in the 2020s to meet anticipated energy demand and decarbonize at pace and scale to keep our climate goals within reach in the Indo-Pacific. Additional efforts include working together on methane abatement in the natural-gas sector and on establishing responsible and resilient clean-energy supply chains.

The Quad will announce a clean-hydrogen partnership to strengthen and reduce costs across all elements of the clean-hydrogen value chain, leveraging existing bilateral and multilateral hydrogen initiatives in other fora.

The students of today will be the leaders, innovators, and pioneers of tomorrow. To build ties among the next generation of scientists and technologists, Quad partners are proud to announce the Quad Fellowship.The Fellowship will sponsor 100 students per year—25 from each Quad country—to pursue masters and doctoral degrees at leading STEM graduate universities in the United States.

Quad leaders are committed to working together to foster an open, accessible, and secure technology ecosystem. Since establishing a new critical and emerging technologies working group in March, we have organized our work around four efforts: technical standards, 5G diversification and deployment, horizon-scanning, and technology supply chains. The Quad leaders launched a statement of principles on technology, along with new efforts that together will advance critical and emerging technologies shaped by our shared democratic values and respect for universal human rights.

Building on longstanding collaboration among our four countries on cybersecurity, the Quad will launch new efforts to bolster critical-infrastructure resilience against cyber threats by bringing together the expertise of our nations to drive domestic and international best practices. The Quad will launch a Quad Senior Cyber Group.