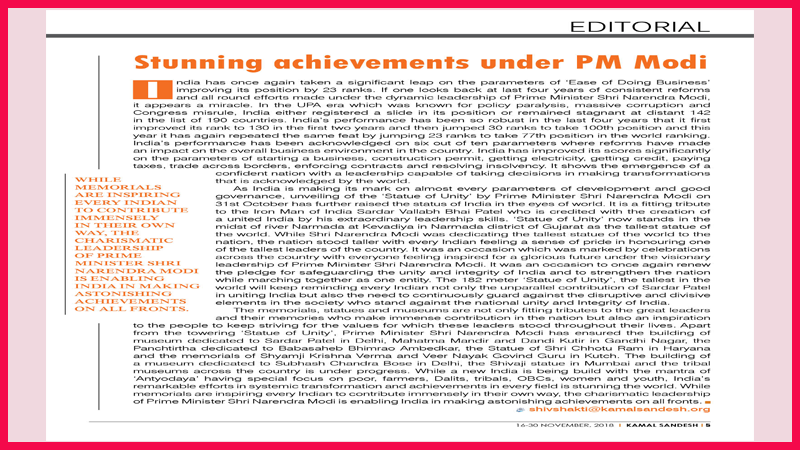 India has once again taken a significant leap on the parameters of ‘Ease of Doing Business’ improving its position by 23 ranks. If one looks back at last four years of consistent reforms and all round efforts made under the dynamic leadership of Prime Minister Shri Narendra Modi, it appears a miracle. In the UPA era which was known for policy paralysis, massive corruption and Congress misrule, India either registered a slide in its position or remained stagnant at distant 142 in the list of 190 countries. India’s performance has been so robust in the last four years that it first improved its rank to 130 in the first two years and then jumped 30 ranks to take 100th position and this year it has again repeated the same feat by jumping 23 ranks to take 77th position in the world ranking. India’s performance has been acknowledged on six out of ten parameters where reforms have made an impact on the overall business environment in the country. India has improved its scores significantly on the parameters of starting a business, construction permit, getting electricity, getting credit, paying taxes, trade across borders, enforcing contracts and resolving insolvency. It shows the emergence of a confident nation with a leadership capable of taking decisions in making transformations that is acknowledged by the world.

As India is making its mark on almost every parameters of development and good governance, unveiling of the ‘Statue of Unity’ by Prime Minister Shri Narendra Modi on 31st October has further raised the status of India in the eyes of world. It is a fitting tribute to the Iron Man of India Sardar Vallabh Bhai Patel who is credited with the creation of a united India by his extraordinary leadership skills. ‘Statue of Unity’ now stands in the midst of river Narmada at Kevadiya in Narmada district of Gujarat as the tallest statue of the world. While Shri Narendra Modi was dedicating the tallest statue of the world to the nation, the nation stood taller with every Indian feeling a sense of pride in honouring one of the tallest leaders of the country. It was an occasion which was marked by celebrations across the country with everyone feeling inspired for a glorious future under the visionary leadership of Prime Minister Shri Narendra Modi. It was an occasion to once again renew the pledge for safeguarding the unity and integrity of India and to strengthen the nation while marching together as one entity. The 182 meter ‘Statue of Unity’, the tallest in the world will keep reminding every Indian not only the unparallel contribution of Sardar Patel in uniting India but also the need to continuously guard against the disruptive and divisive elements in the society who stand against the national unity and Integrity of India.

The memorials, statues and museums are not only fitting tributes to the great leaders and their memories who make immense contribution in the nation but also an inspiration to the people to keep striving for the values for which these leaders stood throughout their lives. Apart from the towering ‘Statue of Unity’, Prime Minister Shri Narendra Modi has ensured the building of museum dedicated to Sardar Patel in Delhi, Mahatma Mandir and Dandi Kutir in Gandhi Nagar, the Panchtirtha dedicated to Babasaheb Bhimrao Ambedkar, the Statue of Shri Chhotu Ram in Haryana and the memorials of Shyamji Krishna Verma and Veer Nayak Govind Guru in Kutch. The building of a museum dedicated to Subhash Chandra Bose in Delhi, the Shivaji statue in Mumbai and the tribal museums across the country is under progress. While a new India is being build with the mantra of ‘Antyodaya’ having special focus on poor, farmers, Dalits, tribals, OBCs, women and youth, India’s remarkable efforts in systemic transformation and achievements in every field is stunning the world. While memorials are inspiring every Indian to contribute immensely in their own way, the charismatic leadership of Prime Minister Shri Narendra Modi is enabling India in making astonishing achievements on all fronts.