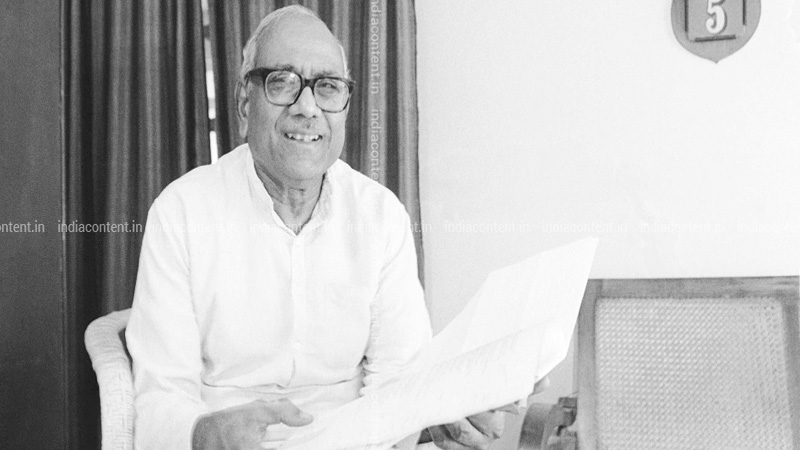 Shri Sunder Singh Bhandari was born on April 12, 1921 in a Jain family of Udaipur (Rajsthan). Originally his familly belonged to Mandalgarh in Bhilwara but his grand father had shifted to Udaipur from there.Shri Bhandari’s father Dr. Sujan Singh Bhandari had used to work in medical field. That had always kept him moving. Shri Bhandari got his education at several places. He had passed his High School from ‘Sirohi’, Intermediate from Udaipur and BA and MA from DAV College Kanpur. He passed his MA in Economics and later studied Law.

Shri Bhandari was the embodiment of “Simple living and high thinking”. A calm and cool, Shri Bhandari had remained bachelor throughout his life and dedicated his life to the service of the nation.

Shri Bhandari was the embodiment of “Simple living and high thinking”. A calm and cool, Shri Bhandari had remained bachelor throughout his life and dedicated his life to the service of the nation. He after completing his education in 1942 had started legal practice in Mewar High Court. In 1937 he took admission in Intermediate in S.D. College Kanpur where Pt. Deen Dayal Upadhayay was his companion. In December 1937 Shri Balu Mahashabde of Indore took him to a RSS Shakha in Nawabganj near Kanpur. Since then he had remained committed to R.S.S. ideology till his last breath.

He had worked as Jansangh Mahamantri till 1977. He has also been the member of the Rajya Sabha from Rajasthan during 1966- 1972 and he was once elected to Rajya Sabha from Uttar Pradesh in 1976 while he was in custody under MISA. In 1998 when his Rajya Sabha term came to an end he was appointed governor of Bihar. In 1999 he was appointed Governor of Gujrat. Bhandari Ji presented before the Karyakartas an example of simplicity, forebearence and austerity. The people might have found his way of working as hard but by nature he was very soft, so as to maintain the image of a disciplined party.

He used to ask the workers maintain decorum in the life style, he was a sculptor and efficient craftsman who had made the Karyakartas of man, society and the organization. He never desired to become KALASH. That is why he was frank by nature.Due to his hard nature and hard attitude towards work, Karyakartas used to call him as Head Master.

On June 22, 2005 he left for his heavenly abode. At 5 in the morning Shri Sunder Singh Bhandari, who had dedicated his whole life in the service of motherland and who had remained a RSS Pracharak throughout his life, breathed his last in his Kalka Ji residence in New Delhi. In his death the country has lost an outstanding nationalist and the motherland has lost her distinguished son. The BJP has also lost its friend, philosopher and guide.