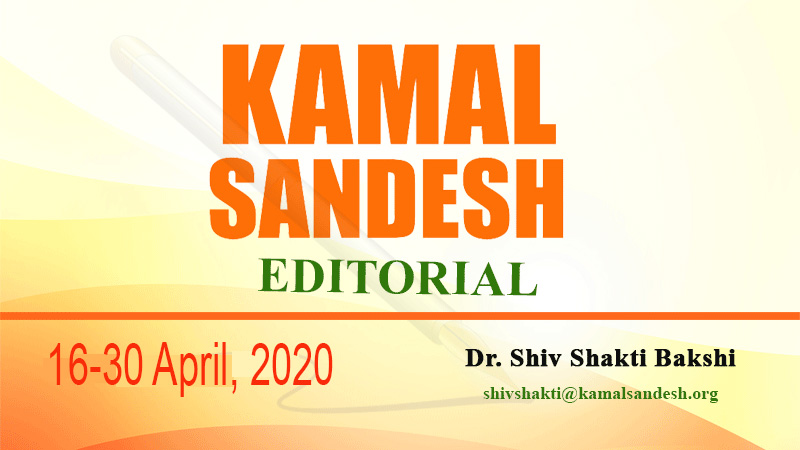 In the dynamic and determined leadership of Prime Minister Shri Narendra Modi India is valiantly waging a war against the Covid19 pandemic unitedly. So far, the nation has been able to contain the large-scale spread of Covid19 pandemic in the country and has been able to create widespread awareness about the kind of threat posed by it to the humanity. As the world witnesses with amazement the way the entire country observes the call for clanging thalis or lighting a lamp on the appeal of the world’s most popular leader Shri Narendra Modi, the people in India have shown rare unity in the fight against the Covid 19 pandemic. In witnessing such unique spectacles in a country like India, the second largest in the world in terms of population and as huge as it is diverse; one can only salute to the united will and solidarity of the Indian people who want to emerge victorious out of this pandemic which has even hit many developed countries very hard. There is no doubt that the people have created an unparallel record by overwhelmingly responding to the appeal for lockdown and observing it strictly in almost entire country.

The countrywide lockdown which was announced by the Prime Minister Shri Narendra Modi for 21 days starting from 24th April 2020 midnight had to be extended upto 3rd May 2020 now. Although the nation responded with strong determination and discipline, the lapses in certain part of the country have further prolonged the period of lockdown. The only solace has been that the cases have not grown exponentially as per the apprehensions of various experts, but the linear progression of cases has necessitated further caution and continuance of preventive measures. There is no doubt that the fight against Covid 19 is going to be a prolonged one and even after the immediate challenge is met, there is a need for a long period of caution and preparedness.

It is to be noted that in this period of extreme crisis the government has responded with a large number of relief measures for the poor and needy section of the population. The relief package announced by the Finance Minister Smt. Nirmala Sitharaman and RBI will certainly address the immediate needs of a large section of the population. The supply of ration, gas cylinder along with cash to vulnerable section of the society for three months will definitely ease pressure from a large number of people. In addition to this, various state governments, welfare groups, philanthropists, individuals from private and corporate sectors and a large number of volunteers and social and cultural groups have come forward to help the needy in the hour of extreme crisis. The people have also come forward to donate generously to the PM CARES fund on the appeal of the Prime Minister Shri Narendra Modi showing that the spirit of service and compassion rules the mind and heart of every Indian. The BJP Karyakartas are also organising massive relief works across the country providing food and various reliefs to the people while donating to the PM Cares fund on the appeal of BJP National President Shri JP Nadda. Entire country appears to be standing united in the war against Covid 19 pandemic.

The Covid 19 pandemic has gripped the entire world and many developed countries including US and many European countries are struggling hard to contain the crisis emanating out of it. Apart from loss of human lives, it has created untold miseries and various hardships to the people in the wake of lockdown necessary for containing the pandemic. India has hitherto been able to stop the pandemic from getting out of control but any lapse anywhere in the country may lead the nation to huge crisis. The time has come to redeem the pledge to defeat the Covid 19 pandemic and stand by the entire humanity in this war. Under the leadership of Prime Minister Shri Narendra Modi India has proved its commitment towards the service of humanity by providing crucial help to many countries in this time of crisis while continuing to commit itself in the fight against this pandemic in the days to come. Time has come to intensify the fight against Covid 19 pandemic.