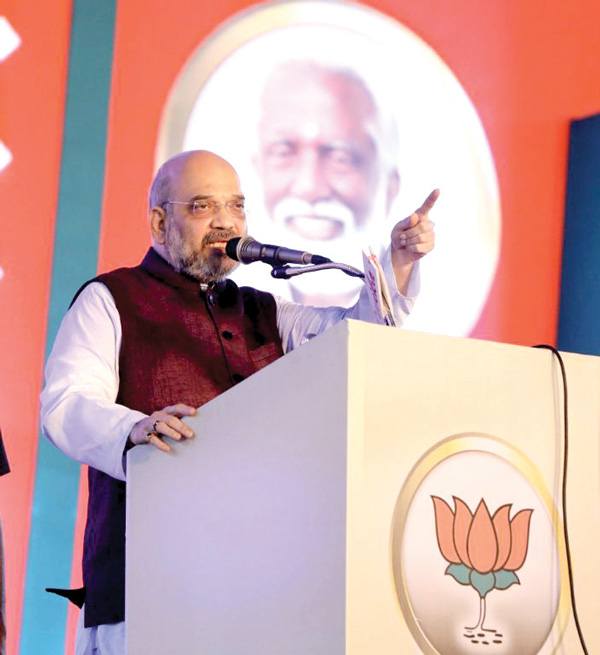 Addressing the valedictory session of BJP’s Janraksha Yatra in Thiruvananthapuram, BJP National President Shri Amit Shah said it was sad that people with differing political views were not being allowed to function in certain parts of Kerala even 70 years after Independence. The BJP president also slammed Kerala’s Pinarayi Vijayan government, stating that the Left Front will be thrown out of power if it continues to indulge in politics of hatred and intolerance.

Addressing the valedictory session of the party’s two-week-long Janraksha Yatra in the state capital, on 17 October, 2017 Shri Shah said, “I would like to ask the chief minister if the mandate he received from the people was for developing the state or liquidating his political opponents. It is sad that the maximum number of political murders in the state occurred in his district – Kannur. He has to take responsibility for this,” the BJP President said, maintaining that there is no place for violence in a democracy. 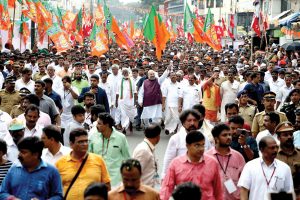 “Violence is the trademark of communists, and political murders only multiplied after they came to power in Kerala. Thirty of our workers were killed when it was in power between 1996 and 2001; 28 were killed between 2006 and 2011; and 13 were killed in the last one-and-a-half years,” he said, adding that violence cannot curb the party’s growth in the state.

Shri Shah also accused the ruling front of evolving a discreet understanding with the Congress. “There is a secret deal between the two, which is why no action has been taken against former chief minister Oommen Chandy despite his indictment by a judicial commission,” he said.

The BJP President said the Left government will soon succumb to its own politics of violence, just like the Congress capitulated to its “legacy of corruption and dynastic politics”. “The CPI(M) can unleash as much violence as it wants, but it can’t stop our ideology. The more mud chief minister Pinarayi Vijayan slings, the better will the lotus bloom in Kerala,” he said.
He also criticized CPI(M) general secretary Sitaram Yechury for objecting to the BJP organizing rallies outside the headquarters of rival parties. “We only talk about development, and that’s because we are concerned about the country. But Yechury’s party destroyed our state office using bombs,” he said.

Noteworthy, Shri Amit Shah had flagged off the Janraksha Yatra from Kannur in north Kerala on 03 October, 2017 and joined the concluding session of the party’s Janraksha Yatra at Thiruvananthapuram. The two-week-long campaign against “red and jihadi terror” triggered an intense war of words between the CPI(M) and the BJP in the state during this time.

-On the concluding day of the Janaraksha Yatra, BJP National President Shri Amit Shah said this Yatra will focus attention on ‘red and jihadi terror’ in the Kerala

-Shri Amit Shah asked Kerala Chief Minister Pinarayi Vijayan to explain why 14 BJP workers were killed in the State after his government came to power.

-If the Congress at the national level was imploding under the impact of ‘corruption and family rule’, the CPI(M) in Kerala would cease to exist due to its obsession with politics of violence.

-He should take the moral responsibility for killing Sangh Parivar workers in his home district Kannur, Shri Shah said.
The BJP and the Centre are ready for a debate on development. Mr. Vijayan should clarify whether he is willing to take up the debate, Shri Amit Shah asked.

-Kerala BJP President Shri Rajasekharan said the CPI(M) had lost its moral ground to educate the BJP on the lessons of democracy and the politics of the State would hereafter be known as one before and after the Yatra.

-Shri Shah also addressed a rally in the CPM bastion, and the home town of Kerala chief minister Pinarayi Vijayan, he held Vijayan responsible for the violence in the state.

-He said, “CPM leader and Kerala Chief Minister Vijayan is directly responsible for all political murders in Kerala”.
As many as 120 BJP workers, 84 in Kannur alone, have been killed in the state since 2001.

-14 people were killed in Kannur since the CPM came to power last year, he said .

-BJP workers were victims of “political murders”, he added.

-He said BJP would use democratic means to fight Left rule in the state.