Shri Nadda landed at the Bagdogra airport and received a grand welcome from party cadres outside the airport. Shri Nadda visited the Nauka Ghat to pay his respects to noted social reformer, Dr Panchanan Barma. He visited the famous Anandamayee Kalibari Temple and paid obeisance to the goddess. During his stay in Siliguri he held a meeting with the party cadres and Vidhansabha Prabharis. He also addressed a group belonging to different communities like Adivasis, Gorkhas and Rajbanshis living across North Bengal. Addressing various groups, he lambasted Chief Minister Sushri Mamata Banerjee and said that her party divides society, but my party BJP unites society. 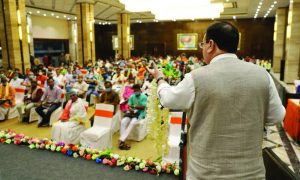 Shri Nadda said that Sushri Banerjee-led TMC government desperately divides the society and then rules it. “The party instigates a community to demand something more to create division in other communities to rule. TMC divides the community, but BJP unites society,” he added.

Shri Nadda spoke in Bengali to speak about how chief minister Mamata Banerjee “desperately did not implement Ayushmann Bharat and even opposed the Agriculture Bills.”

Shri Nadda stressed on the need to showcase the Prime Minister’s Kishan Samman Nidhi and its importance to expose the TMC government’s anti-farmer stand.
“You please dislodge Mamata Banerjee’s government in April 2021, and the project will be implemented from the next day in West Bengal,” he said.

Shri Nadda specifically said that his party was committed to finding a ‘permanent political solution’ to the Hill problem.

Shri Nadda also said that following the line of Himachal Pradesh, he would propose setting up a hub of medicinal plants in the Cinchona plantation area in Mangpo in Darjeeling.

“I spoke to the railway minister today. A meeting will be held with the Railway authorities and MPs from North Bengal to resolve the present problems of railway network in North Bengal,” Shri Nadda also said.