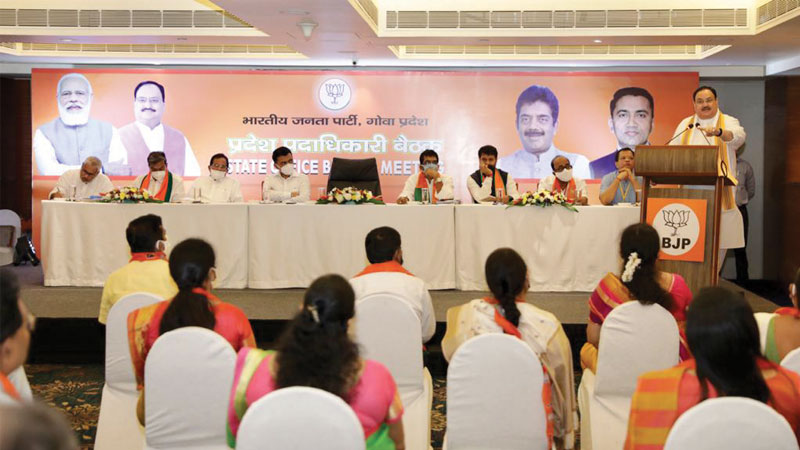 Bharatiya Janata Party National President Shri Jagat Prakash Nadda on a two-days Pravas to Goa from July 24, 2021 attended several review meetings and interacted with the party Office bearers and Karyakartas to strengthen the party at the booth level.

On the first day, Shri Nadda reached Dabolim airport in Goa and received a grand welcome from the party cadres and leaders. In the evening, he met party MPs and MLAs and addressed them.

The next day, on July 25, the BJP National President visited the 18th Century revered Shri Mangesh Temple, which is 20 kms from Panaji in Ponda Taluka’s Mongri hills. He prayed to Lord Shiva for the betterment of the society. Post this, he visited Tapobhoomi Math, Kundem in the morning. Shri Nadda had breakfast there with Sadguru Braheshanandacharya Ji. He visited the COVID vaccination centre at Don Bosco school in Panaji.

On the same day Shri JP Nadda listened to Prime Minister Shri Narendra Modi’s popular ‘Mann Ki Baat’ at 11 am with party cadres at Sai temple at Booth No 21 in Panaji. He held an important meeting with the core team of state BJP in the afternoon.

Addressing a press conference in Panaji the BJP National President Shri JP Nadda said, “I pay my heartfelt condolences to the people who lost their lives in the unprecedented floods in Goa and I pray to God to give strength to the family members of the deceased. We are all with them in sharing their grief.”

He said in this hour of tragedy and crisis the Bharatiya Janata Party government led by Prime Minister Shri Narendra Modi, the BJP government in Goa under the leadership of Chief Minister Shri Pramod Sawant and entire BJP strongly stands with the people of Goa providing all support, help and relief to them.

Shri Nadda said in Goa the Bharatiya Janata Party has become much more strong, effective, and responsive. I have interacted with all MLAs of the state and I have seen that their morale and enthusiasm is very high and that they all are highly committed towards serving the people of the state. The Bharatiya Janata Party government in the state and the BJP state unit is working with full dedication and in the right direction.

The BJP President further said that according to the report of the Niti Aayog, Goa today is the leading state in the per capita income in the country. Similarly, Goa stands third in the country in the human development ranking while in the economic development ranking the state has improved its ranking from seventh position to fourth position in the last four and a half years.

Shri Nadda said to realize the dream of the Prime Minister Shri Narendra Modi of ‘Aatmanirbhar Bharat’, the Bharatiya Janata Party government in Goa under the leadership of Chief Minister Dr Pramod Sawant has started mission ‘Swayampurna Goa’ that will bring about ‘Deep rooted changes’ in the economic and industrial development of the state.