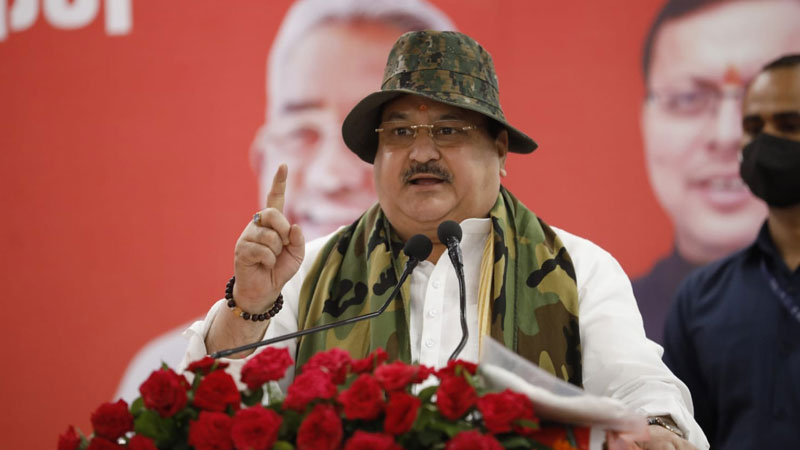 The BJP National President Shri JP Nadda on a two day Pravas to Uttrakhand arrived in Dehradun on 20 August, 2021. After reaching Dehradun, Shri Nadda visited Bhaniyawala, Chiddarwala, Nepali Farm and Raiwala areas. Then the National President reached Haridwar where a number of organizational meetings were held.

During this Pravas the BJP National President took part in various party programmes, spoke and guided party Karyakartas. He also interacted with state leaders in different groups and collected feedback from them.

The BJP National President also met and discussed party preparations for next year’s Assembly poll with MPs, MLAs, ministers, state office bearers, core committee and different Morchas to understand the organizational activities on the ground.
On the second Day of his Pravas, Shri JP Nadda interacted with Ex-Army men at ‘Sainik Samman’ programme in Railwala. Then, he met BJP’s newly-elected Zilla Panchayat presidents, mayors and block pramukhs. Shri Nadda also met and took blessings from the Sadhus and religious leaders.

During these meetings with MLAs and ministers, Shri Nadda emphasised the importance of local issues and the need to stay focused on them in the run-up to the assembly polls. He asked legislators to ensure proper coordination with the party organisation. He told the ministers to take up on priority basis the schemes that can be finished in a time bound manner.

On the Second day of his visit, BJP National President Shri Jagat Prakash Nadda addressed the ‘Sainik Samman’ programme organized in Raiwala, Uttarakhand and interacted with the ex-servicemen. Ex-servicemen from every nook and corner of the state participated in the program.

Addressing the meeting Shri Nadda said it is our duty to give respect to the brave soldiers who have given their all for the defence of the country. I definitely want to say one thing that our soldiers who have dedicated their lives for the defence of the country belong to the whole country. The entire nation is indebted to you for your sacrifice and valour.

He said that scams happened in every defence deal under Congress rule. Every purchase was a scam. It had become the policy of the Congress government to not take any decision in the interest of the country in any defence deal, instead indulge in corruption.

However, after Shri Narendra Modi became the Prime Minister, the work of modernization of the army has intensified. A fleet of 36 Rafale is joining the Indian Air Force. Along with this, Apache, Chinook, Surface to Air Missile and Howitzer guns are also being included. Earlier we were dependent on import of Bullet Proof Jackets but today under ‘Make in India’ we are not only manufacturing world class Bullet Proof Jackets but also exporting the same.

BJP National President Shri JP Nadda, on August 21 in Haridwar honored the revered saints and received their blessings. On the last day of his Pravas in Uttarakhand, he got the opportunity to meet the sages and saints in Haridwar.
On this occasion he said the concerns of saints have been already resolved by our Chief Minister. While bowing to all of you, I assure that our government is determined to solve every problem. Your blessings have always been there for our PM Shri Narendra Modi, on the strength of which he is leading the country on the path of progress with ‘Sabka Saath, Sabka Vikas, Sabka Vishwas and Sabka Prayas’.
He said that the deep faith and reverence that PM Shri Narendra Modi has for Shri Kedarnath ji and Shri Badrinath ji, is not hidden from anyone. He himself monitors the development there and whatever is required, he provides in advance.