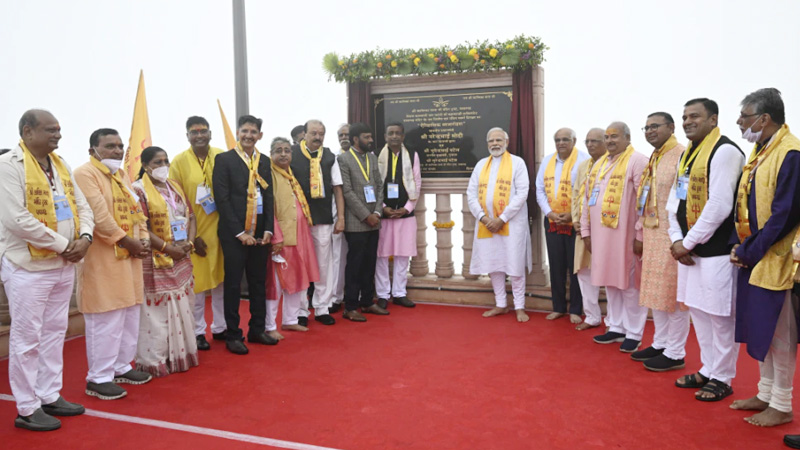 Prime Minister Shri Narendra Modi on 18 June inaugurated the redeveloped temple of Shree Kalika Mata at Pavagadh Hill in Gujarat. It is one of the oldest temples in the area and attracts pilgrims in large numbers. The redevelopment of the temple has been done in 2 phases. The inauguration of the first phase of redevelopment was done by the Prime Minister earlier this year in April. The foundation stone of the redevelopment of the second phase was laid by the Prime Minister in 2017. This includes expansion of the temple base and ‘parisar’ at three levels, installation of amenities like street lights, CCTV system etc.

The Prime Minister expressed his gratitude for his good fortune of being at the temple. He underlined the importance of the moment today when after 5 centuries and even 75 years after independence, ‘dhwaja’ sacred flag was hoisted on the temple. He said “Today, after centuries, the flag is once again hoisted on the top of the Pavagadh temple. This ‘Shikhar Dhwaj’ flag is not only a symbol of our faith and spirituality but this flag is also a symbol of the fact that centuries change, eras change, but the faith remains eternal.” He said that this redevelopment right before the upcoming ‘Gupt Navratri’ is an indication that ‘Shakti’ never dims or disappears.
Referring to Ram Temple in Ayodhya, Kashi Vishvanath Dham and Kedar Dham, the Prime Minister pointed out “Today the spiritual and cultural glory of India is being restored. Today’ New India is proudly living its ancient identity along with its modern aspirations.” Alongwith centres of faith new possibilities of our progress are emerging and this grand temple at Pavagadh is part of that journey, he said. He said that this temple also symbolizes ‘Sabka Saath Sabka Vikas, Sabka Vishwas and Sabka Prayas’.

The Prime Minister recalled how Swami Vivekananda devoted himself to public service after getting Maa Kali’s briefings. He said that today he asked the goddess to give him strength to serve the people. Shri Modi prayed “Mother, bless me so that I continue to serve the people of the country as a servant of the people with more energy, sacrifice and dedication. Whatever strength I have, whatever virtues I have in my life, I should continue to dedicate it for the welfare of the mothers and sisters of the country.”

In the context of Azadi ka Amrit Mahotsav, the Prime Minister said that Gujarat has made sterling contributions in the freedom struggle as well as in the development journey of the nation. Garvi Gujarat is synonymous with pride and glory of India, he said. He said that in the glorious tradition of Somnath temple; Panchmahal and Pavagadh have kept working for the pride in our heritage. He said that today, Maa Kali has blessed her devotees with the greatest gift by completing the redevelopment and hoisting the Dhwaja. In the restoration, the ancient essence of the temple was not touched, he said. The Prime Minister also noted the ease of access to the temple.

“Earlier the journey to Pavagadh was so difficult that people used to say that at least once in life the mother should have darshan. Today, the increasing facilities here have made difficult darshan accessible”, he said. He asked the devotees to maintain discipline. “There is spirituality in Pavagadh, there is also history,nature, art and culture. Here on one side is the Shaktipeeth of Maa Mahakali, and on the other side there is also a heritage Jain temple. That is, Pavagadh has in a way been a center of universal harmony with the historical diversity of India”, the Prime Minister said. Referring to the various temples of Mata, the Prime Minister noted that Gujarat has a security ring of Mata’s blessings.