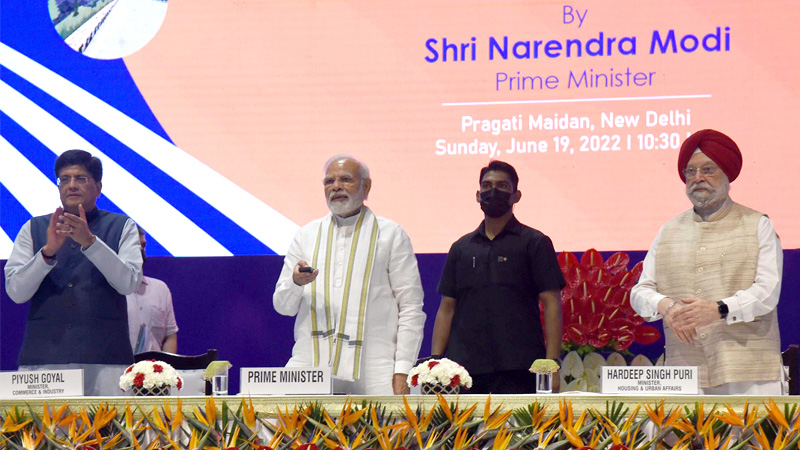 The Prime Minister, Shri Narendra Modi on 19 June dedicated to the nation the main tunnel and five underpasses of Pragati Maidan Integrated Transit Corridor Project. The Pragati Maidan Integrated Transit Corridor project has been built at a cost of more than Rs. 920 crore, entirely funded by the Central Government. It is aimed to provide hassle free and smooth access to the new world class exhibition and convention centre being developed at Pragati Maidan, thereby facilitating easy participation of exhibitors and visitors in the programmes being held at Pragati Maidan. Union Ministers Shri Piyush Goyal, Shri Hardeep Singh Puri, Shri Som Prakash, Smt Anupriya Patel and Shri Kaushal Kishore were among those present on the occasion.

Addressing the gathering, the Prime Minister called the project a big gift from the central government to the people of Delhi. He recalled the enormity of the challenge in completing the project due to the traffic congestion and the pandemic. He credited the new work culture of New India and workers and engineers for completing the project. “This is a New India that solves the problems, takes new pledges and works tirelessly to realize those pledges”, the Prime Minister said.

The Prime Minister said that this tunnel is part of the campaign to transform Pragti Maidan according to the needs of the 21st Century. He lamented the fact that despite changing India, Pragti Maidan which was created to showcase India got lagged behind due to lack of initiative and politics. “Unfortunately there was not much ‘Pragati’ (progress) of the Pragati Maidan”, he said. Despite a lot of fanfare and publicity earlier, this was not done. “The Government of India is working continuously for state of the art facilities, exhibition halls for world class events in the capital of the country”, he added by talking about such establishments like the International Convention and Expo Centre in Dwarka and the redevelopment project in Pragati Maidan. “Modern infrastructure developed by the central government is changing the picture of Delhi and making it modern. This change in picture is a medium of changing destiny also”, he said. This focus on modernization of infrastructure is driven by increasing ease of living for the common people. He also reiterated the need for environment sensitive and climate conscious infrastructure development. The Prime Minister gave the example of New Defence Office Complex at the Africa Avenue and Kasturba Gandhi Road as an illustration for the attitude of dealing proactively with long pending problems, environment friendly construction and care for those who are working for the country. He also expressed satisfaction that the Central Vista project is moving rapidly and said that in the coming days the capital of India will be a topic of discussion globally and a matter of pride for Indians.