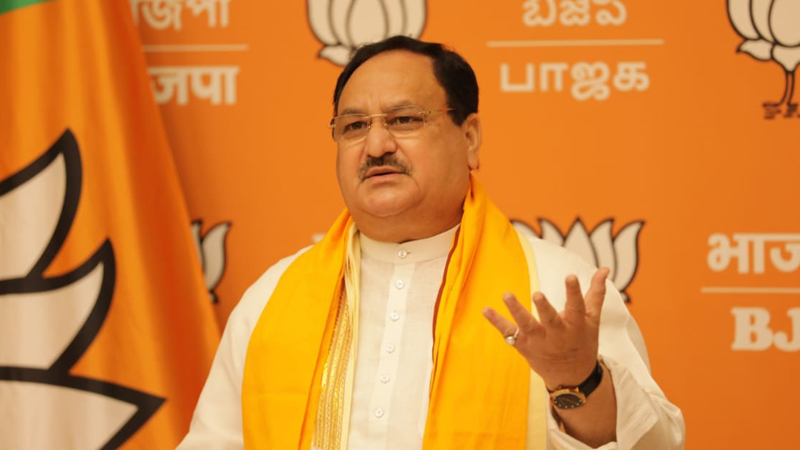 In a press release BJP National President Shri Jagat Prakash Nadda gave the details of the highly successful ‘Jan Aashirwad Yatras‘ which began on the Independence Day and lasted till August 28, 2021 covering more than 24,000 kms in 14 days in which over 5,000 programmes were organised. Full text of the release :


The ‘Jan Aashirwad Yatras’ by the newly appointed 39 Union Ministers in the Narendra Modi government has been appreciated widely across the country. The people of India across the states have heartily welcomed the new Ministers and lauded the Bharatiya Janata Party government led by the Honourable Prime Minister Shri Narendra Modi ji for doing the all-round development and progress of India.

The highly successful ‘Jan Aashirwad Yatras‘ which began on the Independence Day and lasted till August 28, 2021 was highly successful which also ensured enthusiastic participation of people from all walks of life. Entire credit of the success of the ‘Jan Ashirwad Yatra’ goes to the people of India.

I, as the National President of the Bharatiya Janata Party heartily thank and congratulate the people of our country and also crores of the BJP workers for showering their blessings and making the ‘Jan Aashirwad Yatra‘ highly successful and giving their massive support and trust to all the newly – inducted ministers in the Narendra Modi government. I also thank the BJP workers for their hard work and dedication for making the programmes highly successful and memorable.

MODI GOVT HIGHLY COMMITTED TOWARDS THE DEVELOPMENT & PROGRESS OF COUNTRY

It has also been the era of preserving and promoting our great Indian culture and traditions and also of public good and welfare. In the past seven years all the calamities and problems have been converted into opportunities by the Narendra Modi government. Be it the Covid-19 management, the execution of the world’s largest and fastest Covid vaccination programme, evacuation of Indians stuck in any part of the world or the preservation and conservation of the great culture and traditions of our great country – the entire country and the world has seen how our Prime Minister Shri Narendra Modi and the Bharatiya Janata Party government have successfully faced all challenges and has emerged victorious under the most adverse circumstances. Prime Minister Shri Narendra Modi has led all Indians united in dealing with all problems and eliminating them successfully.

The tremendous success of the ‘Jan Aashirwad Yatras’ are also proof of the ‘Vikas Yatra’ that the country has seen under the dynamic and decisive leadership of our Prime Ministers and the trust and support of all his Cabinet Ministers. I congratulate and thank our Prime Minister Shri Narendra Modi for working so devotedly, tirelessly and with full dedication for our country.

The highly successful ‘Jan Aashirwad Yatras’ across the country have left the Opposition parties disturbed and nervous and they unsuccessfully tried to disturb and create hindrances in our Yatra and programmes. It is the great people of our country who have shown their unflinching support and trust to the Narendra Modi government and the Union Ministers. All ploys and disturbances have failed to shake the strong support and trust that the people have showered on the Narendra Modi government. We have all seen how the Opposition parties coalition government in Maharashtra tried to target our Union Minister Shri Narayan Rane. It is a direct attack on our democratic system. The people’s support forced all narrow minded Opposition parties and our political adversaries to retreat. I am thankful and highly indebted to the people of India who have rejected the negative political agenda of the Opposition parties and have stood strongly with the politics of development and growth under the Bharatiya Janata Party government led by Prime Minister Shri Narendra Modi.

Our goal is to establish India as ‘Vishwa Guru’

Our commitment and pledge is unwavering and firm – Sabka Saath, Sabka Vikas, Sabka Vishwas and Sabka Prayas. Our belief is firm – All-round development and growth of India, India‘s safety and security is paramount and India‘s prosperity. Our goal is also firm and resolute – to establish India as ‘Vishwa Guru’.