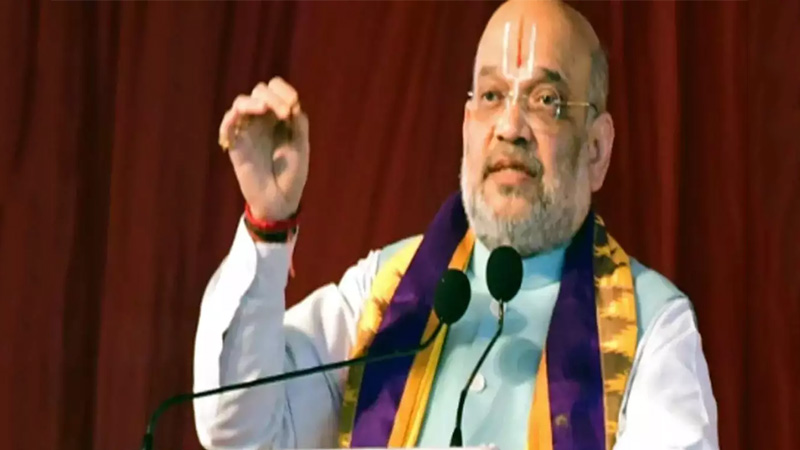 50 years of Establishment of Tripura

The Union Minister for Home and Cooperation Shri Amit Shah, during his one day Pravas to Tripura, addressed a public meeting in Agartala on March 8. On this occasion several dignitaries including the Chief Minister of Tripura Shri Biplab Kumar Deb and Union Minister Ms. Pratima Bhowmik were also present. Shri Amit Shah also offered prayers at Matbari Temple in Udaipur.

Addressing the public meeting, Shri Amit Shah said that this year is the year of ‘Amrit Mahotsav’ of India’s independence. Along with the completion of 75 years of our country’s independence, Tripura also celebrate 50 years of its existence. Shri Shah said that when I came to Tripura in 2015, there was no sign of development in Tripura, there was violence, administration was controlled by one party cadre, the state economy was shadowed by drug and arms smuggling and the tribal community felt cut off from the government. For 25 years these people ruled in the name of the poor but did nothing for the poor.

Shri Amit Shah said that after 4 years of our government, I can see that Tripura, which was earlier plagued by drug and drug trade, is now moving towards becoming self-reliant. Today Tripura is becoming a new hub of trade and business, many schemes related to road and railways are going on in the state and our double engine government has worked to provide electricity to every household of Tripura after 70 years of independence. Under the guidance of Prime Minister Shri Narendra Modi , Chief Minister Shri Biplab Kumar Deb serving the people of state.

The Union Home and Cooperation Minister said that our young Chief Minister has done a very successful job of eradicating drugs from Tripura by running a drug free campaign to make the coming generations of Tripura free from drugs and for this I thank him very much.

North-East a big hub of Development


Shri Amit Shah said that under the leadership of Prime Minister Shri Narendra Modi, the winds of development are going on in the entire Northeast. Earlier there used to be talk of extremism, infiltration, blockade, corruption, drugs and caste tensions here. Today, Modi ji has worked to make the entire Northeast a big hub for development, connectivity, infrastructure, sports, investments and organic farming. Shri Shah said that a lot of efforts have been made for peace in Tripura. NLFT-Tripura pact is done, all the extremists of NLFT have came into the mainstream today. With the Bru Accord, 37,000 Bru-Reang people who had been living without a home for years have been given a house today. We will also do the work of providing employment to them.

He said that today the 2022 Women’s Empowerment Policy is being announced for the women of Tripura, apart from this the Shramik Kalyan Prakalpa which is the dream project of the Chief Minister is also being announced.

The Union Home Minister said that in the North East, where we are fighting extremism and infiltration, we are facing problems like narcotics and cyber attacks, therefore at that time the National Forensic Science University campus is very important in itself. Many undergraduate and post graduate courses such as Ground Forensics, DNA Forensics, Life Line Forensics, Counterfeiting Investigation, Cyber Crime, Narcotics Forensics, Drug Analysis Science, Criminology, Forensic Investigation will be available here. Children and teaching professors will also come out from here. And the entire North East will hugely benefit. He said that after four to five years, 3000 to 4000 students would be making their future and at that time imagine what this area would be like because coming to the university will lead to development of the whole area.

Women will get 33 percent reservation

Shri Amit Shah said today is International Women’s Day and on this day the Tripura Government has announced an action plan for women’s empowerment. The state government has decided that women will get 33 percent reservation in all State government jobs, women will also get reservation in higher educational institutions, women seeking admission in institutions of national importance, if they have to take loan, then Government of India will also provide 3 percent interest on loans to women seeking admission in institutions of national importance. The Biplav Deb government has made reservation of 50 percent of shops for women in all government markets and shopping complexes being built. 50 percent amount has been reserved for women entrepreneurs in Venture Capital Fund, which will encourage women startups.