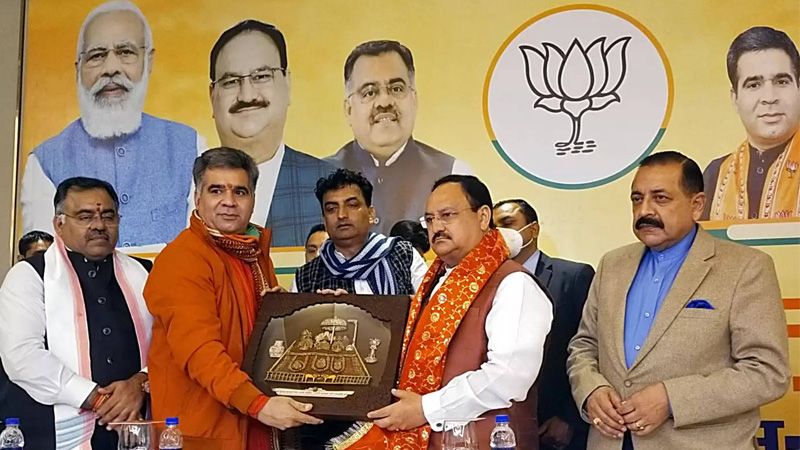 The Bharatiya Janata Party National President Shri JP Nadda has asked party leaders and Karyakartas to gear up for the first-ever Assembly polls to be held in the Union Territory of Jammu & Kashmir in coming days. Shri JP Nadda met selected BJP leaders of Jammu & Kashmir during his one-day visit to Jammu on 07 March, 2022, discussed the political situation after the abrogation of Articles 370 and formation of Jammu & Kashmir and Ladakh Union Territories (UTs).
After arriving in Jammu Airport the BJP National President Shri Jaggat Prakash Nadda was accorded a warm welcome by party leaders, Karyakartas and supporters and later he visited Mata Vaishno Devi Shrine in Katra. In a Tweet, Shri Nadda also informed that, “On his arrival in Jammu, he was overwhelmed by the grand welcome by party workers and the common people of Jammu. He also said that the atmosphere of positive change in Jammu and Kashmir was clearly visible”.

The BJP National President has asked leaders and workers to gear up for Assembly polls, which is likely to be held after the completion of the delimitation exercise in the Union Territory.

Shri JP Nadda said, “Increase your public outreach programmes and inform people about the developmental and welfare schemes launched by the Modi government for the welfare of Jammu & Kashmir. A BJP worker never takes rest and works the whole year for the masses. We have to remain attached to people. That cannot be done only at the time of elections,” he said.

Shri Nadda, asked BJP leaders to hold such meetings every fortnight to discuss in details the political situation and party affairs.

Interacting with media BJP leaders said BJP National President Shri JP Nadda’s visit has rejuvenated the workers and now, as per his advice the party would increase its activities across the UT. We are always in election mode. We are ready for the polls as and when announced. Booth-level leaders and workers have been active,” they said.