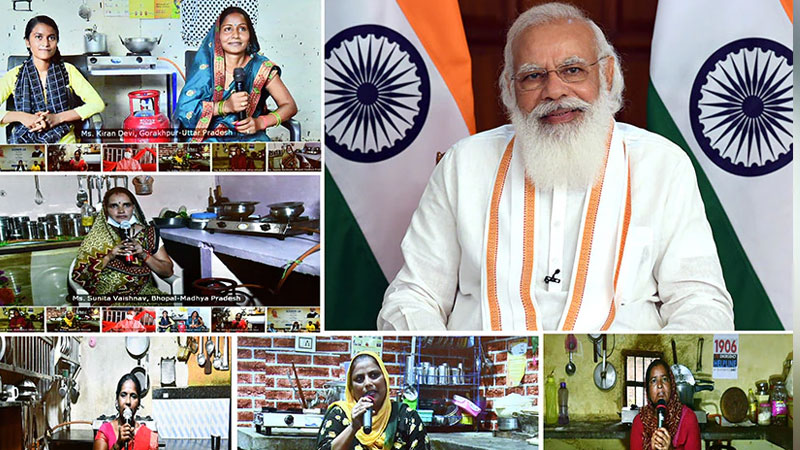 The Prime Minister, Shri Narendra Modi on August 10 launched Ujjwala 2.0 (Pradhan Mantri Ujjwala Yojana – PMUY) by handing over LPG connections, at Mahoba Uttar Pradesh via video conferencing. During the event, the Prime Minister interacted with beneficiaries of the Ujjwala.

Addressing the event, the Prime Minister said he was delighted to address the sisters of UP ahead of Raksha Bandhan. He said the number of people, especially women whose lives have been illuminated by the Ujjwala Yojana is unprecedented. This scheme was launched in 2016 from Ballia in UP, from the land of Mangal Pandey, the pioneer of the freedom struggle. He said that the second edition of Ujjwala was also being launched from UP’s Veerbhoomi – Mahoba. He remembered another son of the soil of Bundelkhand, Major Dhyan Chand or Dadda Dhyan Chand. He said the name of the country’s highest sports award is now named as Major Dhyan Chand Khel Ratna Award. He said this will inspire lakhs of people who want to pursue sports.

The Prime Minister lamented that the countrymen had to wait for decades for getting many basic amenities such as Housing, Electricity, Water, Toilet, Gas, Roads, Hospital and School. Many of such things could have been addressed decades ago. He said that our daughters will be able to come out of the house and kitchen and contribute extensively in nation building only when the problems related to house and kitchen are solved first. Therefore, in the last 6-7 years, he said, the Government has worked to get solutions to various issues on a mission mode. He listed many such interventions like crores of toilets being built across the country under Swachh Bharat Mission; more than 2 crore houses for poor families, mostly, in the names of women; rural roads; 3 crore families got electricity connection; Ayushman Bharat is giving 50 crore people cover for upto 5 lakh rupees worth of medical treatment; direct money transfer for vaccination and nutrition during pregnancy under MatruVandana Yojana; 30 thousand crore rupees were deposited by the government in the Jan Dhan Account of women during Corona period; our sisters are getting piped water under Jal Jeevan Mission. He said that these schemes have brought massive transformation in the lives of women.

The Prime Minister noted that the resolve of health, convenience and empowerment of sisters has received great impetus from Ujjwala Yojana. In the first phase of the scheme, 8 crore poor, dalit, deprived, backward and tribal families were given free gas connections. He said the benefit of this free gas connection was felt in the era of the Corona pandemic. Ujjawala Yojana has led to manifold expansion of LPG gas infrastructure. During the last 6-7 years more than 11 thousand LPG distribution centres have been opened. In UP the number of these centres increased to 4 thousand from 2 thousand in 2014. The Prime Minister said that we are very near the cent percent gas coverage.

He said that Ujjwala 2.0 scheme will give maximum benefit to lakhs of families. He added that now workers from other places need not run from pillar to post for address proof.