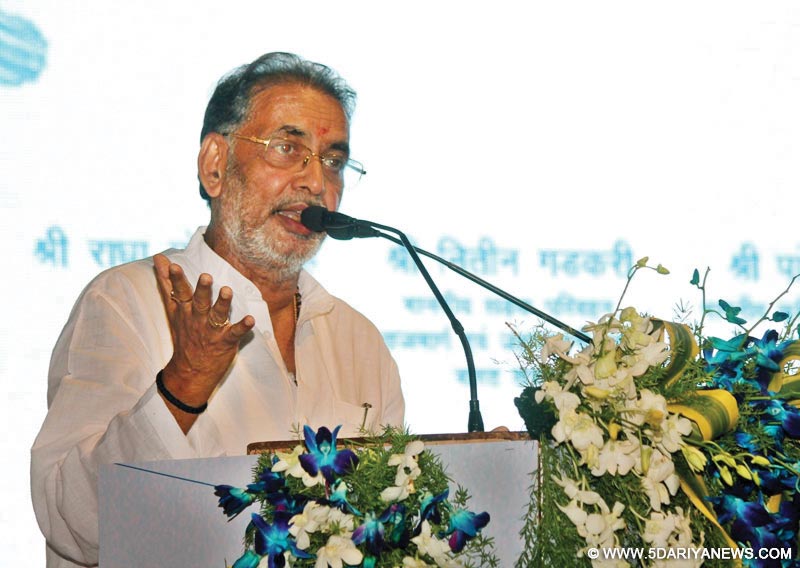 Union Agriculture and farmers Welfare Minister Shri Radha Mohan Singh on June 4 inaugurated Nagpur Dairy Plant and Mother Dairy Milk Booth at Nagpur. While inaugurating the Dairy Plant Shri Radha Mohan Singh said that there is a tremendous potential for working on the development of dairy in Maharashtra. In Nagpur Vidarbha and Marathwada Center, the dairy profession can be a major source of livelihood for rural households. The Agriculture Minister said this on the occasion of inauguration of Nagpur Dairy and Mother Dairy booth here today. On this occasion, Union Minister of Road Transport & Highways and Shipping, Shri Nitin Gadkari and Chief Minister of Maharashtra Shri Devendra Fadnavis were also present.

Union Agriculture and Farmers Welfare Minister, Shri Radha Mohan Singh said that according to the data of May 28, 2017, the total production of milk in 2015-16 reached 156 million tonnes which is 6.28 percent annual growth rate. It may be worth to mention here that milk production during 2014-17 has increased by 16.9% when compared to the year 2011-14. Per capita availability of milk in India is 337gms/day while World average is only 299 gms/day. As far as Maharashtra is concerned, milk production increased from 9.54 million tonnes in 2014-15 to 10.1 million tonnes in the year 15-16 with a growth rate of 6.4%, which is more than country’s growth rate of 6.28%, but per capita availability of milk has been 239 gms/day in 2015-16 which is substantially lower than national average, he added.The Agriculture Minister said about Marathwada and Vidarbha region
Out of the total milk animals in the state, 41 per cent are in these areas, whereas it contributes only 28 per cent (261 lakh kg per day) in the State’s total milk production. This is due to the presence of large number of low-productive indigenous cows and buffaloes.

The average milk productivity of animals in this area is 3.21 kg per day which is less than the state and the country average of 4.42 kg per day and 4.32 kg per day respectively.

58 percent of those who keep milk cattle have only one cattle per family.

Per capita availability of milk in these areas is only 170 gm per day, which is less than the state and country average of 239 and 337 grams per day respectively. The consumption of milk in this area is quite less and malnutrition is increasing.
Institutional structure is weak for milk procurement from milk producers. In this area, the marketable surplus milk available is 37% of the milk production, but, the milk procurement by Milk Unions in the region is only about 8% (4.3 lakh kg per day). Most Milk Unions either receive lesser amount of milk or are not currently functional – about 30 percent of these Unions gets more than 10,000 kilograms of milk per day.

States of Rajasthan and Gujarat with similar climatic conditions are in second and third place in terms of milk production, while Maharashtra is at sixth place. Dairy industry is the main source of livelihood for the rural families of these states. As far as milk production and procurement through milk cooperative societies are concerned, this state is above national level. According to the “19th Census of Livestock-2012”, the population of livestock in Maharashtra has dropped by 9.5 percent from 3.59 million in 2007 to 3.25 crore, in 2012.

Frequent famine, dry wells, dry hand pumps, low-productive animals are common in Marathwada and Vidarbha areas, due to which the dairy industry is more progressive in the western part of the state, where more than one-third of the state’s milk cattle inhabits.

Therefore, dairy industry in Marathwada and Vidarbha is important for rural development and is working with NDDB and its subsidiaries for the development of an integrated (integrated) 3-year plan.

Presently, 377 milk Producer Institutions cover 725 villages where 7969 Milk Producers are pouring 38131 liters of milk in 46 Bulk Milk coolers and 2 Milk Chilling Centers. As per the available report, this milk is mainly going to Mumbai and Hyderabad for sale.

100 percent of the farmers are receiving the direct payment in their bank account. By the end of this year, Latur and Buldhana districts and 1300 villages will be covered.

Agriculture Minister said that Mother Dairy has completely renovated this dairy plant in the record period of four months after the lease agreement between Maharashtra Government and Mother Dairy was signed for Nagpur Dairy in the presence of Chief Minister of Maharashtra on September 14, 2016, and its present capacity is 50,000 liters per day, which can be expanded to 2,00,000 liters per day. Apart from this, work on capacity expansion is going on for the construction of dairy products like curd, buttermilk and lassi and it is expected to be operational by September 2017. Mother Dairy is also setting up milk outlets in the city of Nagpur, which will provide a broad range of products and also offer digital payment options for consumers.
At the end, the Agriculture Minister informed that Mother Dairy is also going to set up a new state-of-the-art plant for processing of milk and milk products in Bhiwandi. The National Dairy Development Board (NDDB), is working actively to increase productivity through pilot ration balancing programme, establishment of semen stations, providing artificial insemination services to farmers door, feed &fodder development activities, supply of quality feed supplement and animal health services at the village level.