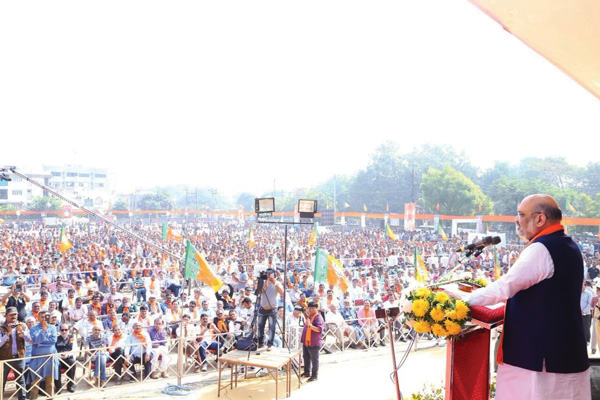 Addressing an election rally in Bhavnagar, Gujarat on 21 November, 2017 BJP National President Shri Amit Shah started his address blaming the Congress for diluting the agenda of this election by raking up caste conflicts in Gujarat and playing dynastic politics. He was addressing the rally before Gujarat BJP State President Shri Jitu Vaghani filed his nomination from the Bhavnagar (west) seat.

The BJP President asked the audience whether they get water or not or if they get power or not. The crowd responded positively to these questions.

He invoked the surgical strikes carried out by the Centre in response to Pakistani militants killing Indian soldiers. He recalled Congress leader P Chidambaram’s comments on Kashmir’s independence, and Shashi Tharoor’s statement on Rohingya Muslims. Shri Shah challenged Congress to clarify its stand on all these issues.

“Earlier during Congress’ rule, 250 days out of 365 used to see curfew in Gujarat. Ever since the BJP came to power in 1995, and especially since 2001 when Narendra Modi took over as the chief minister, there has been peace in Gujarat. When Congress was in power, Pakistani terrorists would come to India and assault Indian soldiers. But last year, when there was an attack in Uri, it was expected that the prime minister would again make some lame statements. But Narendra Bhai made sure we retaliated with surgical strikes and taught them a lesson,” he said. 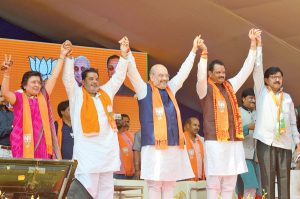 “Congress leaders are playing with national security. They should make their stand clear whether they support these statements given by their leaders or not,” Shri Shah added.

Interestingly, he started his address blaming the Congress for diluting the agenda of this election by raking up caste conflicts in Gujarat and playing dynastic politics.

He then went on to say, “Remember those years between 1980s and 1995, when Congress practiced 3Ts KHAM (Kshatriya, Harijan, Adivasi, Muslim) formula. How people used to suffer due to riots. Since BJP has come to power, there have been no riots. Ask the generation born after 1995. They don’t know what riots are,” he said.

He said Rahul’s visits to Gujarat had increased as he thought the state was a “tourist spot”. “The Gujarat election 2017 is not just a fight between two parties or a fight for who will become the chief minister, but it is to decide if ‘jativad’ (casteism) and ‘vanshvad’ (dynastic rule) will win or Narendra Modi’s ‘vikasvad’ (development politics),” Shri Shah said.

“The people of Gujarat have to decide, that will they choose the Congress which had tried to create a caste divide between 1985 and 1995 by putting the KHAM (Kshatriya, Harijan, Adivasi, Muslim) theory into practice or chose the development and stability provided by the BJP government from 1995 to 2017,” he said.

The BJP President said it was time for the people of Gujarat to decide if they would choose “casteism, dynastic rule, minority appeasement or the developmental politics and stability offered by the BJP”.

“Friends, our leader Narendra Modi has started the process of ridding India of the politics of casteism, dynasty and minority appeasement,” Shri Shah said.

Targeting Rahul Gandhi, he said the UPA government had done nothing for Gujarat. “Rahul Gandhi thinks that this is a tourist spot. He is coming here quite often. I don’t have any problem with that but he should come here and give an account of what the Sonia-Manmohan (UPA) government, which ruled in Delhi for 10 years, did for Gujarat,” Shri Shah said.

“They (UPA) did nothing. After Narendra Modi came to power in Delhi, he gave the bullet train, he gave the ‘Ro-Ro’ ferry service, he gave the international airport (for the Saurashtra region) and he resolved all the pending problems that Gujarat had with the Centre,” he said.