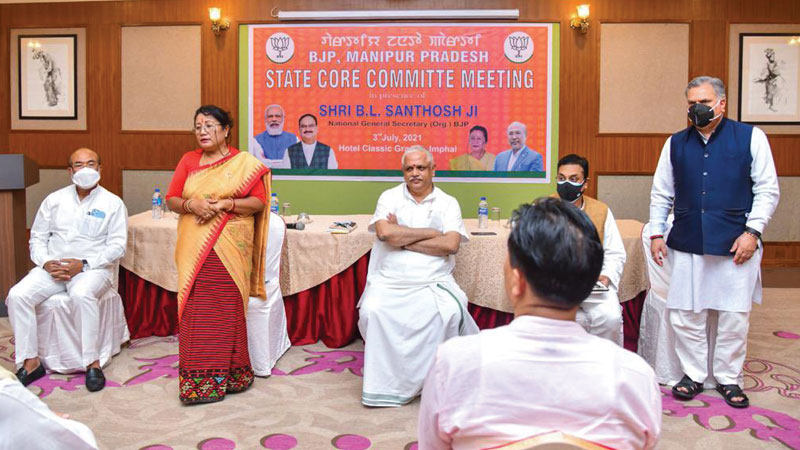 Speaking to the Committee members Shri BL Santhosh discussed the forthcoming Assembly election in the State and discussed steps to be taken up to ensure the party’s victory in the 12th Assembly elections, which is due in the early part of 2022. He also discussed about the vaccination drive against Covid 19 and on the progress of ‘Sewa Hi Sanghatan’ in Manipur.

Appealing to all to get vaccinated without any hesitation, Shri BL Santhosh had also appealed to the people including the pregnant women to get vaccinated against Covid-19. He added that vaccination is the only means to take the fight to the virus. Following the meeting, Manipur BJP President Smt. A Sharda Devi, in a press briefing thanked the Prime Minister Shri Narendra Modi and BJP National President Shri JP Nadda for appointing her as the BJP President of the State unit.
She further stated that a number of meetings of the party State Executive and Core Committee were held in the presence of BJP National General Secretary (Organisation) Shri BL Santhosh to strengthen BJP Manipur unit and to chalk out strategies for the forthcoming elections. The Manipur BJP President further said that Shri BL Santhosh’s three days Pravas to Manipur was to review the progress of ‘Seva Hi Sangathan’, preparations for the upcoming elections and to meet party representatives and office bearers.

The meeting mainly discussed the responsibilities of the Core Committee in the forthcoming State Assembly Election and strategies relating to it, which is due early next year. She added that the party Core Committee has also decided to increase the participation of women in the Assembly and local body elections.

Highlighting the achievements of the BJP government, Smt. A Sharda said that the long-cherished dream of implementing Inner Line Permit System (ILPS) in the State has been delivered since the coming of the incumbent BJP Government led by Chief Minister Shri N Biren Singh and the indigenous people now feel more secure.
Further stating that conditions of National Highways, State Highways and inter-village roads have also been improved considerably since the coming of the BJP led Government, she asserted that the incumbent Government has given benefits of Chief Minister-gi Hakshelgi Tengbang (CMHT) and others to the people.

She also stated that frequent imposition of bandhs and blockades in the State has also dropped noticeably with the coming of the BJP led Government.

The BJP National General Secretary (Organisation) also met with party’s state leaders, BJP MLAs and functionaries to chalk up strategies for the upcoming assembly election, during his Pravas in Imphal.