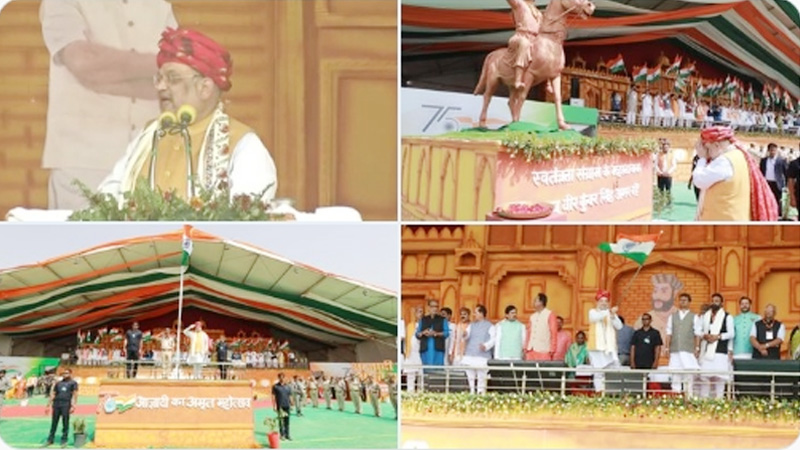 Addressing the huge rally Shri Amit Shah said iconic freedom fighter Veer Kunwar Singh defeated Britishers at the age of 80 years and his contribution in freedom struggle set a milestone in history but historians have not given due place to him in history. Shri Shah said Veergatha of Veer Kunwar Singh must reach to the youth of the country.

On the occasion Shri Shah announced the installation of a statue and construction of Veer Kunwar Singh memorial at Ara, the district headquarters of Bhojpur, which will be funded by the central government.

The Union Home Minister said the spirit of all nationalists should be strong and all important heroes of the freedom struggle would be duly honored.

At the end of the programme all the participants waved the national flag and chanted the glorious slogan of “Bharat Mata Ki Jai” which surcharged the entire atmosphere on the historic occasion.

The ‘Vijayotsav’ was organized under the ongoing ‘Azadi Ka Amrit Mahotsav’ to make the young generation aware of the heroic deeds of Veer Kunwar Singh and his fight against the British East India Company.

Speaking to the participants, Bihar BJP President Shri Sanjay Jaiswal said Kunwar Singh’s birth anniversary was a non-political event. The motive behind the mega celebration is to inform the coming generations about the sacrifices of Veer Kunwar Singh, who fought 15 times against the British Raj at the age of 80. When one of the bullets hit Singh’s left wrist, he felt his hand has become useless and that there was an additional risk of infection from the bullet. He drew his sword and cut off his left hand near the elbow and offered it to the Ganga, Shri Jaiswal said.

On the occasion of ‘Vijayotsav’, thousands of people unfurled Tricolor and carrying Tricolor participated in the rally, chanted the glorious slogan of “Bharat Mata Ki Jai” and remembered the contributions of Veer Kunwar Singh during freedom struggle. People from 12 districts of Bihar participated and organized a collective waving of around 78,200 national flags to make the programme a historic one.