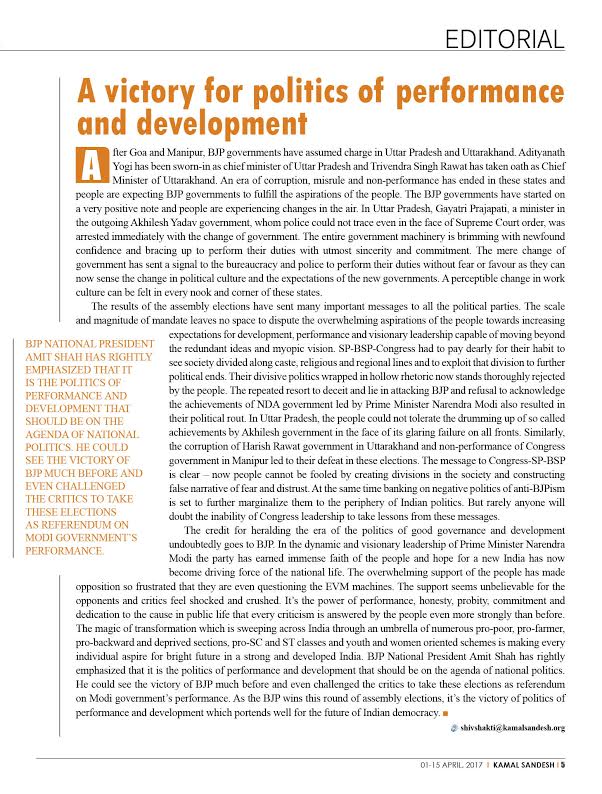 After Goa and Manipur, BJP governments have assumed charge in Uttar Pradesh and Uttarakhand. Adityanath Yogi has been sworn-in as chief minister of Uttar Pradesh and Trivendra Singh Rawat has taken oath as Chief Minister of Uttarakhand. An era of corruption, misrule and non-performance has ended in these states and people are expecting BJP governments to fulfill the aspirations of the people. The BJP governments have started on a very positive note and people are experiencing changes in the air. In Uttar Pradesh, Gayatri Prajapati, a minister in the outgoing Akhilesh Yadav government, whom police could not trace even in the face of Supreme Court order, was arrested immediately with the change of government. The entire government machinery is brimming with newfound confidence and bracing up to perform their duties with utmost sincerity and commitment. The mere change of government has sent a signal to the bureaucracy and police to perform their duties without fear or favour as they can now sense the change in political culture and the expectations of the new governments. A perceptible change in work culture can be felt in every nook and corner of these states.

The results of the assembly elections have sent many important messages to all the political parties. The scale and magnitude of mandate leaves no space to dispute the overwhelming aspirations of the people towards increasing expectations for development, performance and visionary leadership capable of moving beyond the redundant ideas and myopic vision. SP-BSP-Congress had to pay dearly for their habit to see society divided along caste, religious and regional lines and to exploit that division to further political ends. Their divisive politics wrapped in hollow rhetoric now stands thoroughly rejected by the people. The repeated resort to deceit and lie in attacking BJP and refusal to acknowledge the achievements of NDA government led by Prime Minister Narendra Modi also resulted in their political rout. In Uttar Pradesh, the people could not tolerate the drumming up of so called achievements by Akhilesh government in the face of its glaring failure on all fronts. Similarly, the corruption of Harish Rawat government in Uttarakhand and non-performance of Congress government in Manipur led to their defeat in these elections. The message to Congress-SP-BSP is clear – now people cannot be fooled by creating divisions in the society and constructing false narrative of fear and distrust. At the same time banking on negative politics of anti-BJPism is set to further marginalize them to the periphery of Indian politics. But rarely anyone will doubt the inability of Congress leadership to take lessons from these messages.

The credit for heralding the era of the politics of good governance and development undoubtedly goes to BJP. In the dynamic and visionary leadership of Prime Minister Narendra Modi the party has earned immense faith of the people and hope for a new India has now become driving force of the national life. The overwhelming support of the people has made opposition so frustrated that they are even questioning the EVM machines. The support seems unbelievable for the opponents and critics feel shocked and crushed. It’s the power of performance, honesty, probity, commitment and dedication to the cause in public life that every criticism is answered by the people even more strongly than before.The magic of transformation which is sweeping across India through an umbrella of numerous pro-poor, pro-farmer, pro-backward and deprived sections, pro-SC and ST classes and youth and women oriented schemes is making every individual aspire for bright future in a strong and developed India. BJP National President Amit Shah has rightly emphasized that it is the politics of performance and development that should be on the agenda of national politics. He could see the victory of BJP much before and even challenged the critics to take these elections as referendum on Modi government’s performance. As the BJP wins this round of assembly elections, it’s the victory of politics of performance and development which portends well for the future of Indian democracy.