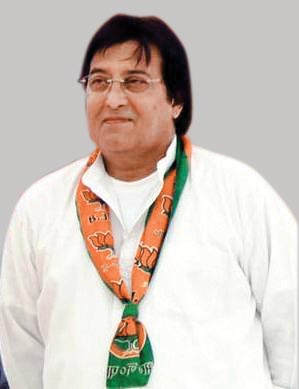 BJP leader and veteran Bollywood actor Shri Vinod Khanna died at the Age of 70 on April 27 after prolonged illness. He was elected from Gurudaspur for 1998–2009 and 2014–2017. Shri Atal Bihari Vajpayee in his government appointed him as the Minister for Culture and Tourism in July 2002. Six months later, he was made the Minister of State for External Affairs.

Prime Minister Shri Narendra Modi condoled the demise of Shri Khanna. “Will always remember Vinod Khanna as a popular actor, dedicated leader and a wonderful human being. Pained by his demise. My condolences,” Shri Modi tweeted.
A number of political leaders expressed their condolence on Khanna’s death.

“Saddened to know about the demise of one of the greatest legends of Indian cinema,” Maharashtra Chief Minister Shri Devendra Fadnavis said. “We have lost an eminent personality who played a variety of roles in his film career and later in his social-political life.” Fadnavis added.

Information and Broadcasting Minister M. Venkaiah Naidu condoling the demise of Vinod Khanna, Shri Naidu said, “His contribution to Indian cinema is tremendous and it will be very difficult to fill the void caused by his untimely death,” he added.
Lok Sabha Speaker Sumitra Mahajan said in her condolence message he would be remembered as a perfect gentleman with a perennial smile on his face. “I am deeply saddened to learn about Vinod Khanna’s sad and untimely demise, She added.
Khanna was born in a Punjabi family to Kamla and Kishanchand Khanna on 6 October 1946, in Peshawar, British India (now in Pakistan). He had three sisters and one brother. Shortly after his birth, India was partitioned and the family left Peshawar and moved to Mumbai. Khanna became a follower of the spiritual teacher Osho (Rajneesh) and left the film industry in 1982 for five years.

Vinod Khanna was not only successful actor but also a successful businessman and politician too. In 1997, Khanna joined the Bharatiya Janata Party (BJP) and was elected from Gurdaspur constituency in Punjab in the next year’s Lok Sabha poll. In 1999, he was re-elected to the Lok Sabha from the same constituency. Later, he became union minister for culture and tourism in July 2002. Six months later, he was moved to the ministry of external affairs (MEA) as Minister of State. In 2004 he won re-election from Gurdaspur. However, Khanna lost out in the 2009 general elections. In 2014 general election he was again elected for 16th Loksabha from same constituency.

Multifaceted personality Shri Vinod Khanna was elected four times to Lok Sabha and became Minister of State for cultural and subsequently became minister of state for foreign affairs in Atalji`s led NDA government. He remained pillar of value based politics and remained always attached to the people and raised their issues in Parliament.

His demise is not only loss to film-world but also irreparable loss to the Bharatiya Janata Party. In the hour of grief I, myself ,and from our party workers express deep condolence for grief –stricken family and his lakhs of fans.
— Shri Amit Shah