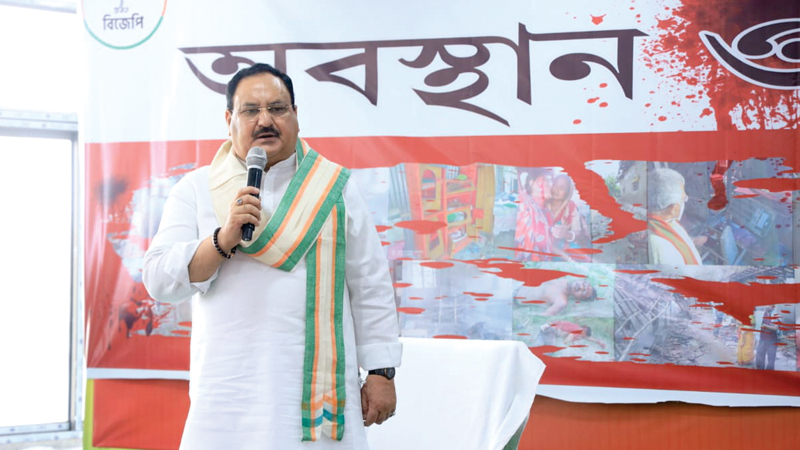 The Bharatiya Janata Party National President Shri Jagat Prakash Nadda on 05 May, 2021 protested in the West Bengal BJP state office at Hastings in Kolkata against the large-scale violence by the Trinamool Congress party workers after assembly election results and to establish democratic ideals and principles in the state.
Shri Jagat Prakash Nadda along with other state leaders also visited Jagdatdal where the goons of the Trinamool Congress party under the protection of the TMC government had killed Shobha Rani, the mother of the Bharatiya Janata Party booth president Kamal Mandal. The Bharatiya Janata Party National President spoke to the family members of Shobha Rani, offered his condolences and assured them that the BJP will ensure that all guilty people are punished severely.
Under the leadership of National President Shri Jagat Prakash Nadda all the elected BJP MLAs, all MPs, core committee members of the party and spokespersons also took oath to continue their struggle for the formation of ‘Sonar Bangla’, to end political violence in the state and to re-establish democracy and republic in West Bengal.
Addressing a press conference after the protest BJP National President Shri Jagat Prakash Nadda said the people of West Bengal have given the Bharatiya Janata Party responsibility to work as the main opposition party in the assembly and the state, we all will seriously take this responsibility as devoted workers of ‘Sonar Bangla’, and as citizens of India to fulfill our important duty of working as a constructive opposition.
He said, “Till now the Bharatiya Janata Party has strongly fought against political violence, appeasement and anarchy in West Bengal. We will not leave any stone unturned in our fight for ‘Sonar Bangla’ and will rest only after taking our fight to its logical end”.
He said, “What we saw during the last two days was mayhem, uncontrollable political violence that engulfed entire West Bengal. This is not only against the democratic ideals and principles; it is also insult to the rich culture and ethos of West Bengal. This cannot in any way reflect a progressive and mature society”.
Shri Nadda said, “I went to the homes of our party members who were killed in the violence and met their family members, I cannot narrate their sorrow and grief in words. We will take our fight to its logical end and will not rest till we ensure justice for our departed party leaders and workers”.
By following the principles laid down in our Constitution by Babasaheb Ambedkar ji and preserving our cultural and social diversity. We will move forward towards growth and development and take West Bengal forward under the leadership and guidance of Honorable Prime Minister Shri Narendra Modi by following the path of ‘SabkaSaath, Sabka Vikas, Sabka Vishwas’, he added.
The BJP President said the Prime Minister Shri Narendra Modi has taken several important and unique initiatives to bring West Bengal to the mainstream of development and progress. The Bharatiya Janata Party will act as a responsible and constructive opposition party and help in progress, development and prosperity of West Bengal.
He said, “Today while taking oath, we want to tell the entire nation that whatever is happening in West Bengal today is totally unacceptable. The scenes which the nation saw during the Partition, it is being reflected again on the streets of West Bengal. Those who have the responsibility of providing peace and safety to the people West Bengal are themselves inciting violence”.
Shri Nadda said the Trinamool Congress party has won, its leader has the right to take the oath; but we also take a pledge that we will end political violence from West Bengal and work towards strengthening our democracy.