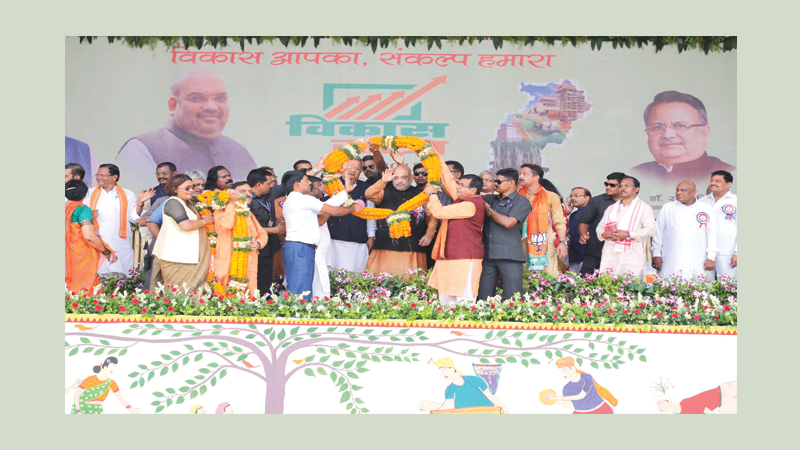 Bharatiya Janata party National President Shri Amit Shah lashed out at Congress President Rahul Gandhi over asking what Prime Minister Shri Narendra Modi has done in four years since his government came to power. Addressing a huge rally in Ambikapur of Surguja in Chhattisgarh, on 10 June, 2018 he lambasted the Congress chief and said that the BJP is not answerable to him.

Shri Shah said BJP will give a detailed account of work done by the government to the people of the country and not Rahul Gandhi. Congress President Rahul Gandhi was asking what has the Modi government done in four year’s. Rahul baba, why are you asking for our account of four years? We do not need to give you any account. We will give an account of every minute and every paisa to people when we go to them seeking votes,” he said.”You are asking ‘hisab’ from us but this country wants ‘hisab’ of four generations of your family. Your family ruled the country for 55 years. People of this country want to know why development did not take place during the 55-year rule of four generations of your family,” Shri Shah asked.

Shri Amit Shah was in Chhattisgarh’s Ambikapur district to attend the ongoing ‘Vikas Yatra’ of the BJP led state government. He later attended the State Core Group meeting where he reviewed the BJP’s preparation for the Assembly polls due later this year. The first phase of Yatra has culminated on 14 June at Bhilai in Durg.

Shri Shah said that the Scheduled Caste/Scheduled Tribe (Prevention of Atrocities) Act and the reservation system in government jobs are to stay till the BJP-led government is in power at the Centre. “Congress will try to spread numerous lies to mislead people in the near future. They might tell you that the SC/ST Act and the reservation system are being scrapped. I want to clarify that it will never be the case and the SC/ST act and reservation are here to stay till BJP government is in power,” Shri Shah said.

Chhattisgarh Chief Minister Dr. Raman Singh also addressed the public rally and questioned the Congress over their 60 years of rule. “Congress is opposing Vikas Yatra. I would like to ask people of Surguja, did Congress ever provide you rice at Rs 1/kg? Did they ever provide you medical insurance? Did they ever do that in their 60 years of rule,” he said.

Beating of drums and folk dance performances by various people marked BJP President Shri Amit Shah’s roadshow at Ambikapur town in Chhattisgarh. This is part of the ‘Vikas Yatra’ campaign being undertaken by Chief Minister Dr. Raman Singh ahead of the assembly polls in the state by the end of this year.

Shri Amit Shah was accorded a rousing reception by a large number of party leaders and workers when he commenced the roadshow in the afternoon from Kharsiya Naka area.

People gathered in large numbers along the lanes in the heart of Ambikapur city, the headquarters of Surguja district. The roadshow, which lasted about 45 minutes, covered a distance of around 5 kms, passing through Agrasen Chowk, Jaistambh Chowk, Mahamaya Chowk, Gandhi Chowk and Ambedkar Chowk. It culminated at P G College grounds, where Shri Amit Shah addressed a public meeting.

Apart from the Chief Minister Dr. Raman Singh, state Home Minister Shri Ramsewak Paikra and other cabinet ministers also took part in the event. As many as 52 welcome gates were erected on the route.

The road show was led by a bike-rally and followed by a convoy of vehicles. Raising of slogans by the BJP workers, participation of various folk troupes and beating of drums added special colour to the event. Banners and flags were also displayed.