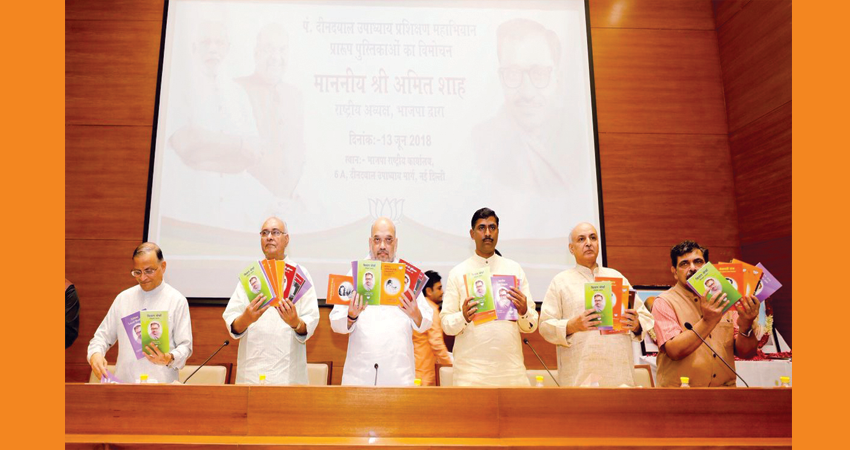 Under the first phase of “Pandit Deendayal Upadhyaya Prashikshan Mahabhiyan,” which was launched in the year 2015. BJP has already trained nearly 10 lakh workers in nearly a series of training workshops conducted from the National level to State, Mandal and booth level.

Speaking at the release function, BJP President Shri Amit Shah said, “This is the world largest training program of political workers ever in history which will set a new standard in Indian politics. In the first phase the party took up training from mandal to district and state level karyakartas and it has already trained over a million workers at these levels. The second phase envisages to impart area-specific- training for the Morchas of the party”.

BJP National General Secretary and incharge of training programme Shri Muralidhar Rao said “Besides refreshing and reorienting the workers about the party ideology, ethics, objectives, party policies and brief history of the BJP, these trainings would also impart a basic understanding and latest developments relating to technical aspects of specialized subjects relevant to that particular party cadre. The trainings would be held at different levels, i.e. National, State, District and Mandal levels. While trainers training at the National level is of 3 days duration, the training at the State, District and Mandal level is of 2 days.”He further added, “BJP has emerged as the world’s largest political party with over 11 crore members and is known as party with difference. It’s the duty of the party to prepare trained political workers who can contribute to national development and ensure that the government schemes and work reaches the last person in the queue.

Shri Mahesh Sharma, convener of the program said, “After BJP came to power with the massive mandate in 2014, the Party president Shri Amit Shah lodged three important programs for Expansion, Consolidation and Training in the party. The first was ‘Maha Sadasyata Abhiyan’ in which the BJP enrolled over 11 crore party members. This set a world record with the BJP emerging as the largest political party in the world. The second was ‘MahaSampark Abhiyan’ in which all the newly enrolled members were contacted by the party cadre. In the third program – the ‘Pt. Deendayal Upadhyaya Prashikshan Mahabhiyan’ was launched. The idea was to train the party workers at all levels from mandal to national. For the last two years under the Prashikshan Mahabhiyan, the party has trained over 10 lakh workers all over the country. This again is a unique world record.” Other members of the BJP National training program, R. Balashankar, Hemant Goswami and Sunil Pandey were also present on the occasion.